Minutemen fans finally have something to cheer about 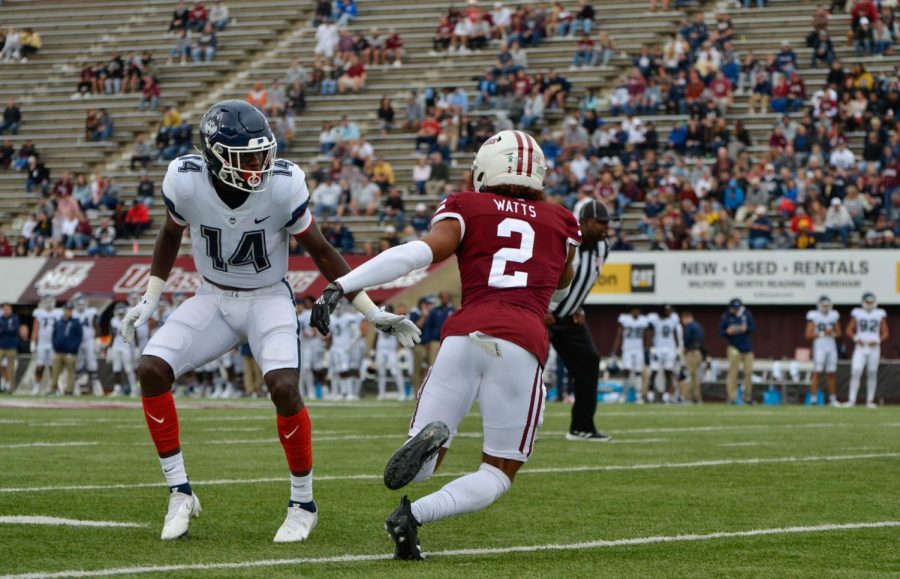 The latest edition of the long-standing rivalry between the Massachusetts football team and Connecticut took place Saturday, with a little extra on the line this time around. Both UMass (1-5) and UConn (0-7) entered the season winless for the past two years, with the Huskies’ last win coming over the Minutemen back on Oct. 26, 2019 at McGuirk Alumni Stadium.

This time, it was UMass’ turn to defend its home turf and allow the student section to storm the field. The Minutemen used astute defense and Ellis Merriweather out of the backfield to earn a 27-13 victory on Saturday afternoon for their first win on the season.

Merriweather guided the offense for UMass as the lone scholarship running back. The 6-foot-2, 225-pound workhorse carried the ball a staggering 39 times for 171 yards and a pair of touchdowns. The Minutemen only threw 23 passes and called 15 rushes for other players, meaning Merriweather was responsible for more than half of his offense’s plays. On their first drive of the game, he ran the ball 10 times including eight straight attempts, with the end result being a touchdown. Merriweather said it was the first time since high school that he was relied on to that degree.

“The line blocked their butts off, I can’t stress that enough,” Merriweather said. “I just had a field day because they provided me with those lanes.”

UMass head coach Walt Bell now owns a 2-20 all-time record as a head coach. He’s talked all season about his team’s inability to execute on all three sides of the ball simultaneously, but the team was finally able to reap the rewards of early morning practices and continuing to grind through an unforgiving schedule over the first six weeks.

“I’m not worried about the program, I’m worried about the players,” Bell said. “Our players work so hard, they’ve been through an unbelievable amount of adversity. I’m just happy for those guys. What they’ve had to go through, they’ve played a tough schedule up until this point, [I’m] just proud they found a way to win a football game.”

As solid as Merriweather and the Minutemen’s offense was, the defense controlled the game after a rocky first quarter. UConn scored 10 points in the first frame but was held scoreless after that besides a late field goal. Cody Jones and Da’Shon Ross led UMass with nine tackles apiece, and the defense sacked Huskies’ quarterback Stev Krajewski twice after having just two sacks on the season entering Saturday. They also held UConn to 1-for-10 on third-down conversions and forced multiple field goals in the red zone.

The Huskies were led by coach Dennis Dottin-Carter, who filled in for interim head coach Lou Spanos after he tested positive for COVID-19 along with two players. Dottin-Carter’s midweek preparation did not match execution on gameday — especially in the offensive end.

“We just didn’t take advantage of the opportunities that were there,” Dottin-Carter said. “There were a couple of receivers that were open, and then in the run game, we’ve just got to do a better job coming off the ball and maintaining our blocks. [UMass] did a good job, hats off to them.”

The Minutemen will now enter their bye week and give Merriweather some well-deserved rest before heading to Tallahassee for a date with Florida State. That game will kick off on Saturday, Oct. 26.