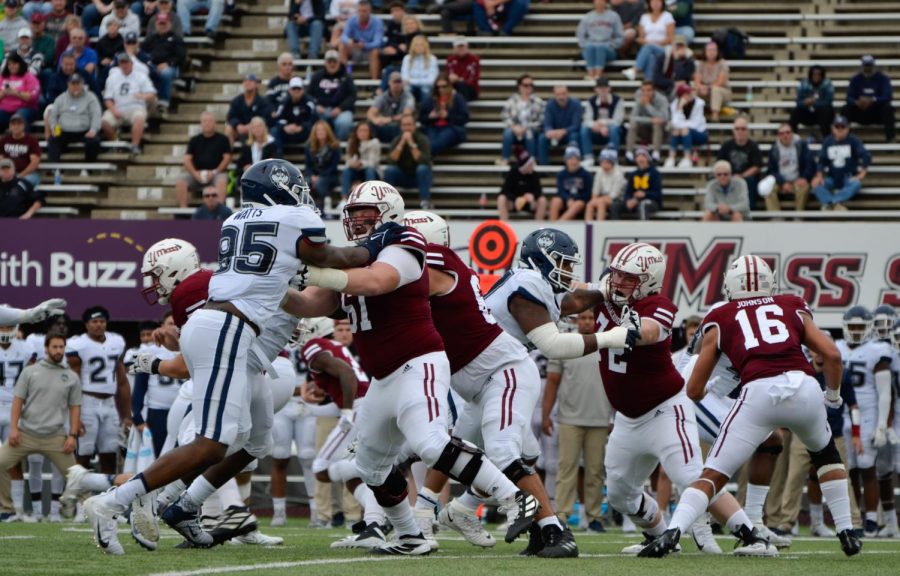 For the second time this season the Massachusetts football team went an entire game without scoring a touchdown. Florida State took down the Minutemen 59-3, winning in impressive fashion.

The Minutemen (1-6) were down only 10-3 at the end of the first quarter but the Seminoles (3-4, 2-2 Atlantic Coast Conference) put up 28 points in the second quarter effectively putting the game away, taking a 38-3 lead into the half.

Brady Olson had a tough time against Florida State’s defense, completing only 44 percent of his passes. The freshman signal caller also threw two interceptions on the day, one of which was a pick six. Florida State’s Jarvis Brownlee Jr. jumped an Olson pass with 34 seconds to go in the first half and returned it 70 yards the other way for a touchdown. Olson also was picked off by Florida State’s Jammie Robinson in the endzone.

“I thought it was a dominate performance by our defense, something that we needed,” Florida State head coach Mike Norvell said.

“We’ve played teams that maybe we were a little further along than and we’ve hadn’t always played as clean… so I was really pleased with our performance defensively,” Norvell said.

UMass started the game out on a high note as Florida State fumbled the opening kickoff, setting up the Minutemen on the Seminoles own 26-yard line. UMass capitalized on the miscue with a Cameron Carson 45-yard field goal. This was UMass’s only score of the game.

Florida State dominated in the run game rushing for 365 yards while averaging 8.1 yards per carry, despite having a banged up offensive line. Seminoles running back Jashaun Corbin ran for a game high 127 yards on 11 attempts. Corbin along with four other Seminoles had rushing touchdowns on the day.

“These guys are giving everything they have,” Norvell said. “To be able to go out there, especially in the second half… to be able to run the football, have some explosive plays, that’s big.”

Zamar Wise did a little bit of everything for the Minutemen. The freshman quarterback ran 12 times for 60 yards, caught one pass for three yards, and completed three passes for 19 yards. Wise has now rushed for a total of 127 yards over the past two games and has solidified himself as a viable option offensively for the Minutemen.

The Minutemen will look to bounce back against Liberty, a team that averages 34 points a game thanks to a balanced rushing and passing attack.

UMass is set to play the Flames next Saturday at 12 p.m.