The Minutewomen were riding a 10-game unbeaten streak 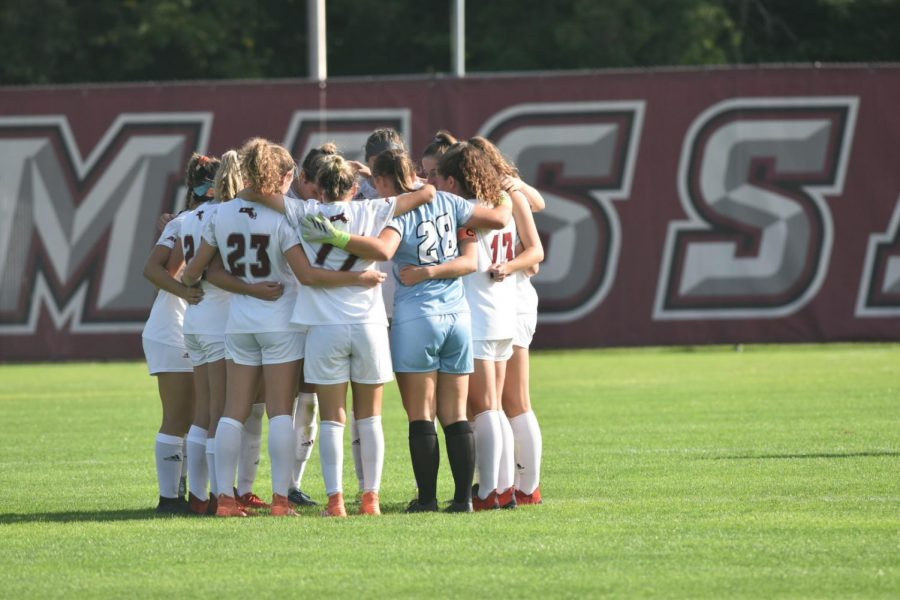 The France national anthem echoed around Rudd Field Sunday afternoon, honoring French native Ava Jouvenel on senior day. Lauren Bonavita and Mia Carazza make up the rest of the Massachusetts women’s soccer team’s senior trio who were acknowledged in the center circle pre-game, accompanied by their parents and relatives, and a bouquet of flowers.

“It was amazing,” Jouvenel said of her French reception pregame. “It was a pretty emotional day and I’m just happy so many people came out to support us. I always listen to the American national anthem. I don’t really know the words, but there’s a heavy emotion that I actually felt with the French anthem.”

UMass (7-3-3, 3-1-1 Atlantic 10) failed to deliver a victory to its jam-packed senior day crowd, eventually crumbling to the constant Virginia Commonwealth pressure in overtime. Rams (9-2-0, 5-0-0 A-10) defender Lana Golob was able to get on the end of a diving save by Bella Mendoza, firing it into the net from barely five yards out. Sunday’s loss ends the Minutewomen’s 10-game unbeaten streak dating back to Aug. 23.

“We play a three-back formation and they had three pretty offensive forwards and outside mid, so it was a really good matchup,” Jouvenel said. “They were pretty quick, good on the ball, they were finding the right passes in the box and they had a really good attack. We held on as long as we could but fell asleep a little bit unfortunately.”

VCU, who stays atop the A-10 standings laid it on the Minutewomen offensively, never letting either Megan Olszewski or Mendoza rest in front of the net, taking 16 total shots and forcing seven combined saves from UMass’ goalkeeper tandem.

“We handled their press really well,” Dowiak said. “It was their counter attacking that was really effective. They have three of the best players in the league going forward. It was easy in the first half, I just think we put ourselves in a little bit of a chase situation for the start of the second half.”

The Minutewomen opened the scoring in the 69th minute, as a bouncing ball in the center of the box eventually found its way to the feet of Bella Recinos who slotted one home for UMass. The Minutewomen’s momentum would quickly diminish at the hands of Rams midfielder Anna Bagley who evened the score at one apiece just eight minutes later.

Making her first start in the 2021 season, Bonavita jumped straight into action, putting quality chances into the box and being the designated long free-kick taker for the Minutewomen. Returning from injury just last Thursday at George Washington, UMass’ 2019 leading goal scorer can provide her team with another viable forward alongside Chandler Pedolzky heading into its final five games of the season.

“[Having Bonavita back] adds another layer of depth to us that we’ve been missing a little bit,” Dowiak said. “To have that quality in the final third is exciting to have. I’m happy that she’s back.”

The Minutewomen’s stout defense has consistently displayed both talent and heart, being the core of the UMass’ success all season. Despite losing and conceding twice to the Rams, the back line was able to withstand countless dangerous chances throughout the 96 minutes of action.

“[Julianna Ryan], [Fiona Kane] and [Jouvenel] played unbelievable again,” Dowiak said. “[Olszewski] and [Mendoza] both made some unbelievable saves. I hate the way that it ended because they both played really well. There’s a lot to be proud of.”

Along with being two of UMass’ three seniors, Jouvenel and Carazza are also captains for this Minutewomen side and have provided leadership on and off the field to their teammates who might be unfamiliar with the challenges a Division I college season entails.

“Ava and Mia were voted as our captains pretty unanimously,” Dowiak said. “It wasn’t tough to understand what they both bring. [Bonavita] has been an amazing leader. It’s tough to be off the field your senior year. They care so much about each other, and they set that example. This is always the hardest time of the year when players start to maybe play less minutes, but they’ve kept the group really on the same page so I’m really proud of them.”