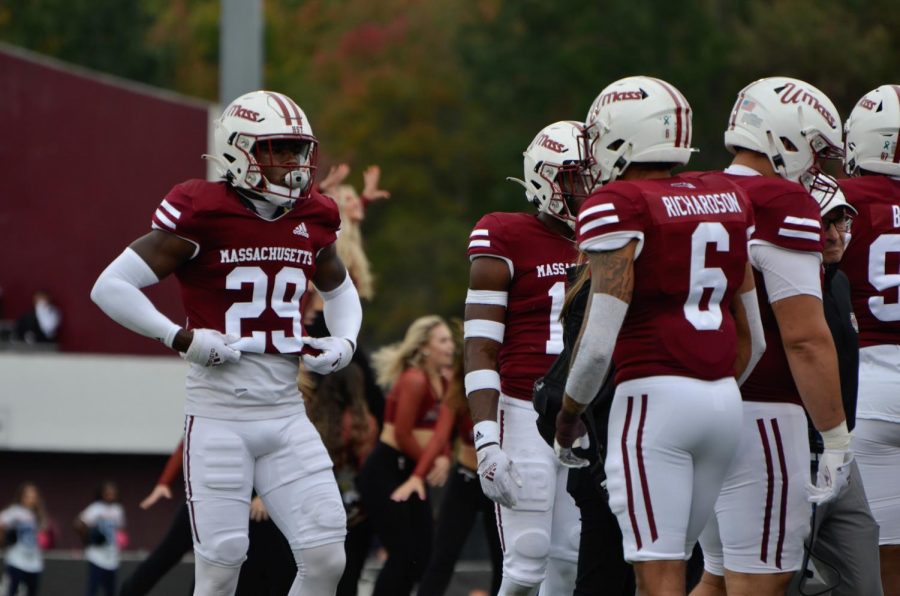 The Massachusetts football team was never close throughout its matchup with Liberty in its 62-17 blowout loss at Williams Stadium on Saturday afternoon.

The Minutemen (1-7) were sizable underdogs to begin the contest but dug themselves into a massive hole after just the first two possessions. The opening play of the game was an interception thrown by true freshman Brady Olson. After a one-play touchdown, UMass fumbled on the next drive and gave up a one-play touchdown yet again. The first two Minutemen drives combined to last four plays and negative one yard, while the Flames (7-2) scored a pair of touchdowns in two total plays that took them a whopping 14 seconds.

The Minutemen kept the second-half box score relatively close, but still lost that part of the contest 21-14. They scored the two touchdowns on the first and final drive of the second half, with the drives showcasing both Olson and Zamar Wise at quarterback. The first drive ended in a 30-yard pass from Olson to Rico Arnold for his second touchdown catch of the season. The final drive mixed Wise’s rushing ability with third-string quarterback Garrett Dzuro but was topped off by a Jared Chisari rush up the middle for his first career touchdown.

While both of those drives were encouraging for the struggling offense, Liberty’s reserves still outscored UMass in the second half, adding to the 41-3 lead that the starters built in the first half. Head coach Walt Bell knew coming into the game that the Flames’ quarterback Malik Willis would present a challenge to the defense that has struggled to handle dual-threat quarterbacks all year long.

“He can make all the throws, runs extremely well, hard to tackle, and [Liberty’s] coach Freeze does a great job,” Bell said. “He’s probably going to be one of the top three quarterbacks taken in next year’s draft, he’ll have a chance to be a first-round guy. Once or twice a game he’s going to do some magic back there, and he’s going to present a very difficult challenge for us.”

Bell was spot-on with his assessment of the QB. Willis completed 70 percent of his attempts for the Flames and set the tone with a 60-yard shot to DJ Stubbs to go up 21-3 early in the first quarter. He was one of four rushers to tally at least 30 yards on the ground, and he also threw for 307 yards to go with four touchdowns.

The loss adds salt to the wound of UMass after a report earlier this week came out saying that other independent teams including Liberty, UConn, and New Mexico State are in talks with Conference USA to join in upcoming seasons. The Minutemen, 12-48 since returning to FBS play in 2016, haven’t been linked to any reports as of late and continue to struggle since moving towards being an FBS independent team.

Redshirt junior Ellis Merriweather continues to be the one consistent bright spot for UMass, who ran for 149 yards on 34 attempts against the Flames’ rushing defense that was ranked 33rd in the nation entering Saturday.

UMass now returns home for the next two weeks which will give it the best chance at winning more than one game for the first time since Bell has taken over. Next up is Rhode Island for the Minutemen’s homecoming game on Saturday at 3:30 p.m.

Dylan Corey can be reached at [email protected] and followed him on Twitter @TheDylanCorey.