Weller: UMass can make it far if it can create early opportunities offensively 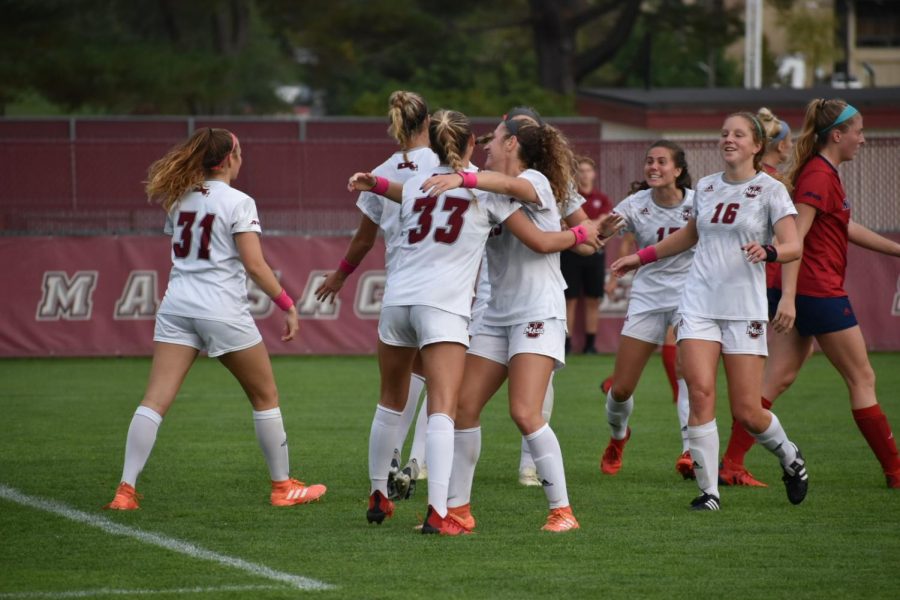 After a season of growth, the Massachusetts women’s soccer team advances to its fourth consecutive Atlantic 10 tournament under the leadership of head coach Jason Dowiak. The Minutewomen (9-5-4, 5-3-2 Atlantic 10) currently sit in fourth place, earning home-field advantage in the quarterfinals on Sunday.

UMass scored a total of 24 goals this season, with most being recorded in the second half of games. The common objective throughout has been to get shots off early and show dominance over the opponent, yet despite plenty of opportunities in the first half, the Minutewomen were unable to find the back of the net until later in the game.

This has been a trend for UMass in the past. After the condensed and irregular season in the spring of 2021, the Minutewomen made it to the tournament, but were unable to advance past the first round. Davidson came out strong with a goal 25 seconds in, but UMass was able to contain them for the remainder of the game, while not being able to get the equalizer.

With a predominately younger team over the past two years, the Minutewomen are still developing and growing as a group. Freshman Chandler Pedolzky leads the Minutewomen with 16 points this season, recording four goals and eight assists. Ashley Lamond showed strength throughout the latter half of the season, following right behind Pedolzky in points, with Karina Groff being a major contributor on offense as well.

In Dowiak’s four years, the farthest UMass has made it in the tournament is the semi-finals in 2019 after advancing past Fordham, 4-0, but losing to George Washington. The Minutewomen finished the season in 3rd place that year, with a record of 6-3-1 in conference play.

Prior to 2018, UMass was not able to make it to post season play for three straight years. In his first year, Dowiak led the team to the tournament, but they lost in the first round to George Mason, 1-2, in double overtime. Now in his fourth year, his team has the chance make it farther and play to the their full potential.

The Minutewomen have the skill to make it far in the tournament and defeat the top teams in the conference. In early October, UMass narrowly lost to top seeded Virginia Commonwealth, 2-1, in overtime. They were able to match the Rams (13-3-0, 9-1-0 A-10) energy and level of play, while also matching them in opportunities and shots, but two unanswered goals late in the game handed them the loss.

The key will be to keep a high level of play throughout the entire game, specifically coming out strong right from the first whistle. Putting pressure on the defense and getting numbers back when needed will allow the Minutewomen to dominate.

UMass will host the quarterfinal game against St. Bonaventure on Sunday at 1 p.m., who it previously tied with. The Minutewomen outshot the Bonnies (7-7-4, 5-4-1 A-10) 18-7 throughout the game but only three of those were on target. With players like Groff, Pedolzky, Lamond, and Mia Carazza leading the charge in the front, along with a strong midfield and defensive line, shots on net and balls in the back of the net will come naturally to the Minutewomen if they play to their full potential and come out strong form the jump.