What will you do, Chancellor Subbaswamy?

In the most pivotal moment of his tenure, the Chancellor must take concrete action to address sexual assault allegations and racist remarks 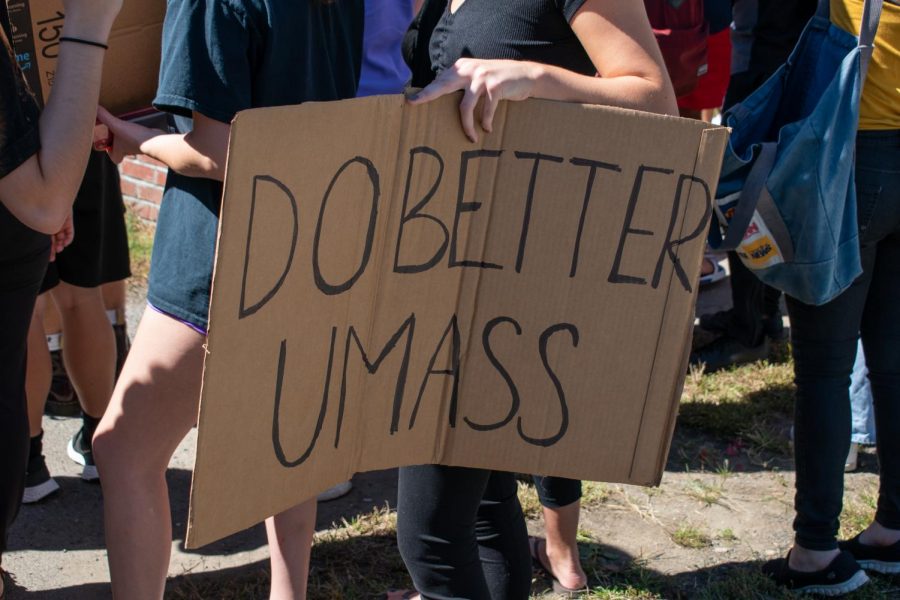 This semester began in earnest: The University of Massachusetts community eagerly anticipated its return to the Pioneer Valley, where in-person classes and full residence halls awaited. In these aspects, the beginning of the semester is off to a strong start and has been a sight for sore eyes  — many of us weary of isolation and social distancing. Due to a directive requiring faculty, staff and students to be fully vaccinated, 96.9 percent of the community has gotten the shot. For the first time in 18 months, the campus seemed almost normal. Almost.

The month of September has been mired in multiple crises facing the campus. Of particular importance are the recent outrage centered around accusations of sexual assault at fraternities on campus, which led to massive protests outside the Theta Chi fraternity house and multiple follow-up protests, sit-ins and forums. Equally painful was the racist email that was sent to Black student organizations across campus last week. These events have shown that the campus is anything but normal. There needed to be a forceful response to these events by the administration; specifically, from Chancellor Kumble Subbaswamy.

Instead, Subbaswamy sent out two lackluster emails to the campus community in response to the incidents. In his first email, which regarded the sexual assault allegations against fraternities on campus, Subbaswamy focused solely on the large protests that had occurred the night prior, but did not acknowledge the numerous other allegations that students have been reporting for years but the administration has never dealt with. Subbaswamy sent out a similar email in response to the racist message sent to student organizations. At a forum hosted by a panel of UMass administrators regarding both incidents, which Chancellor Subbaswamy attended, student reactions were mixed; most had expected more from the Chancellor, especially due to the massive response in the student body to both incidents.

Subbaswamy, in his two emails, seemed to avoid the larger issue at hand and instead solely address the specific incidents that occurred most recently. While it’s true that hiring a cybersecurity company is likely the best move they could have made regarding the racist email incident, there is still more they can do. The same can be said for the sexual assault allegations towards fraternities. The University has an obligation to produce a comfortable and safe environment for its students. Chancellor Subbaswamy must take concrete action to make real advancements in the community for both victims of racism and victims of sexual assault.

This semester is perhaps Subbaswamy’s most challenging period yet during his tenure as Chancellor. Assuming the position in 2012, Subbaswamy has endured as a productive leader, championing the building of the Integrative Learning Center and the new Worcester Dining Commons, while remaining a relatively popular Chancellor among the student body. Until recently, he has had a mostly quiet tenure at UMass regarding controversies on campus.

Two other incidents come to mind from years past. In 2018, a racist message was scrawled across a poster in Melville Hall, the third racist incident in Melville that semester. In response, Subbaswamy sent an email, as per usual. The second incident is Theta Chi’s hosting of a large party last February at a time with high COVID-19 restrictions in place, which led to their suspension until July. This incident is rare as it is one of the few that resulted in a direct response from the administration. Due to the nature of this consequential period in Subbaswamy’s tenure, the Chancellor must approach this semester’s twin crises with a similarly concrete response.

Subbaswamy must make efforts to reform the way sexual assault and racism are talked about and treated on campus. Instead, he vaguely addresses the recent incidents that have occurred, while listing support groups and resources (which are helpful, but not enough). Subbaswamy should take more direct action, which could include instituting freshmen in mandatory racism and sexual assault classes before living on campus and taking more direct action on groups responsible for sexual assault. A forceful response would go a long way in preventing incidents like these from happening again in the future. This would not only be good for the campus community, but also good for Subbaswamy. If the campus is this fed up now with his response, it is likely to repeat itself and elicit a more unfavorable outcome next time.

Luke Halpern can be reached at [email protected] and followed on Twitter @lukehalpern.