Wise provides a new offensive element for the Minutemen 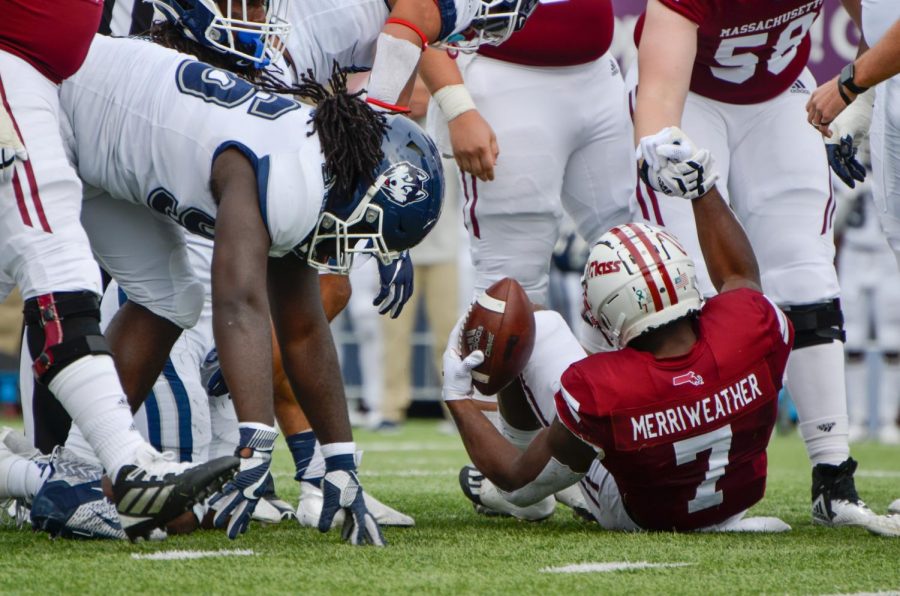 The Massachusetts football team found itself down 10-7 at halftime struggling to generate momentum on the offensive end. Things turned around in the second half though as UMass (1-5) was able to find an offensive groove through its ground game.

“We had some really good success early in the game running the football,” UMass coach Walt Bell said. “We knew coming into the game we were going to have to run the football to win.”

The Minutemen started the third quarter off with the ball and presented the Connecticut defense with a new look on offense, opting to run the read option with backup freshman quarterback Zamar Wise. UMass began the half with an 18-yard run from Ellis Merriweather through that read option concept with Wise.

On the ensuing play Wise broke off on an electrifying run as he kept the ball on the option, juking and spinning his way to another gain of 18 yards. The Minutemen capped off the drive with a field goal, breaking a streak of six scoreless outings.

Wise had a breakout game against the Huskies (0-6), rushing for 64 yards on 11 attempts. He also iced the game for the Minutemen, as he took a direct snap from one yard out and punched it in the endzone, putting UMass up 27-13 with 4:54 left in the game.

The freshman had been used sparingly up until Saturday, where he saw an increased workload. Wise adds a whole different dimension to the UMass offense as his ability to run the football allows for the Minutemen to add the read option and designed quarterback runs into its playbook.

“Zamar [Wise] did a nice job, he’s always going to have a plan with us,” Bell said. “As he continues to grow and mature, not necessarily physically, but mentally… as he continues to do that the more he will be able to do.”

Merriweather served as a workhorse running back for the Minutemen tallying 39 carries for 171 yards and a pair of rushing touchdowns. He made his presence felt early on UMass’s first drive of the game, finishing with 10 carries for 58 yards and a touchdown.

“Just to touch the ball that many times and not put a ball on the ground… that’s unbelievable,” Bell said. “I’m proud of Ellis [Merriweather], how he took care of the football, he ran hard, he ran physical.”

Merriweather became the first UMass running back to have 30 or more carries in a game since Marquis Young accomplished the feat in 2015.

The redshirt junior had a number of great runs on the day, but his best came early on in the first quarter as he took a handoff and burst through to the second level of the defense. He then bulldozed right through UConn cornerback Jeremy Lucien and put him on his backside as he rumbled forward for a gain of 15 yards.

Merriweather bounced off would be tacklers and fought for extra yards throughout the game. The 6-foot-2, 225 pound back seemed to not lose stamina despite carrying the ball 39 times.

“We work for this in practice,” Merriweather said. “I probably take a little more carries than that in practice. The way that I was working… I was being intentional with my work during the week and this is really just the production.

The Minutemen had 247 rushing yards as team — the highest total they have had all season. Merriweather and Wise accounted for 235 of those yards.

“Those guys [UMass] did an excellent job offensively and defensively,” UConn’s interim coach Dennis Dottin-Carter. “They did a great job of game planning, they put their guys in a position to be successful and took advantage of opportunities.”

Merriweather, Wise and the rest of the Minutemen will have time to rest as they head into a bye week. UMass’ next game is scheduled for Oct. 23 against Florida State.