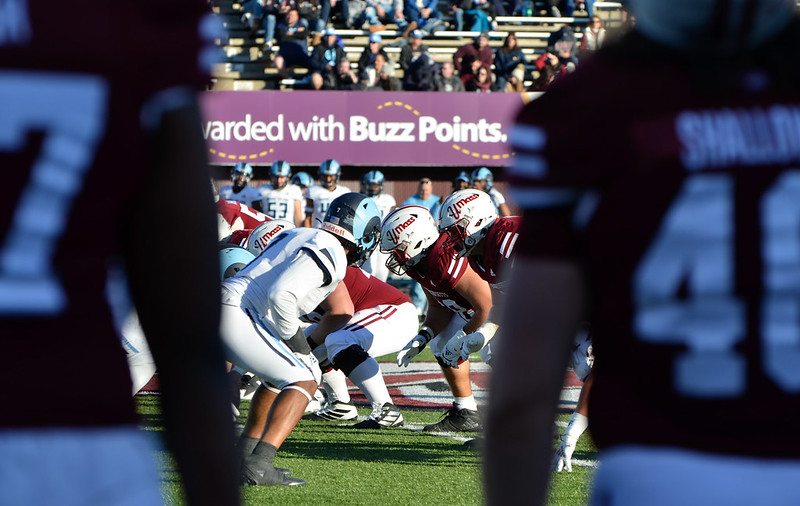 I’m going to break it down in three pieces: the firing, the hiring and what the Massachusetts football team is dealing with in these odd final three weeks.

Bamford made it clear in his initial statement that Bell was fired because progress was not being made. The line was obviously drawn for Bamford after a loss to an FCS team that was on a three-game losing skid in Rhode Island. The Minutemen (1-8) looked outmatched throughout the entire game, leading to the most embarrassing loss of Bell’s three-year tenure.

Bamford and Bell both voiced how year three was supposed to be the year real progress was made. Bamford went to the extent of saying that he wasn’t expecting to win many games this season, but the lack of progress from Bell and his staff left Bamford with no choice but to move on.

With Bell’s remaining contract, Bamford clarified that any money he makes at a new job within the next two years will be reduced from what he is owed from the University, meaning that they will likely not be paying Bell much at all of his remaining salary.

The bigger question was why Bamford pulled the trigger now instead of waiting until season’s end. What is the benefit of causing premature complications when there is nowhere to go but up?

Now that transfers can come into schools with immediate eligibility, Bamford highlighted his desire to have a coach that would be able to contribute to UMass’ recruiting. Bamford wants to know who will be his next head coach before Dec. 15, which is the early signing period for college football.

This team is still insanely young, it shouldn’t come to a surprise that Bamford wants to add more experience to this team through the portal. There’s also the fact that COVID-19 rules make room for teams to add seven additional players and recruits this season, meaning that the Minutemen can sign 32 players instead of the standard 25.

Bell was making $625,000 per year and Bamford noted that the pay of the next head coach will “definitely” be increased. He talked about upgrading the coaching salary pool of $300,000-$400,000 three years ago when Bell and his staff were hired.

He is now expecting a similar upgrade this time around, in hopes to retain more assistants and likely reel in a higher caliber head coach.

“We’re fully aware we need to continue to invest more money, especially salaries to our next leader and the next staff,” Bamford said.

Don Brown has been a consistent name brought up in the coaching search. He currently serves as the defensive coordinator at Arizona, one of the worst teams in the Power-5. He did have some years of success at Michigan, but his name is brought up because he has experience as a coach in New England and most specifically in Amherst, when he brought UMass to the FCS national championship in 2006.

Brown is 66, a large difference from bringing in Bell who was 34 at the time he was hired. Age will not matter for Bamford, who said he’s willing to listen to any coaching candidate’s plans and philosophies. Bamford is clearly desperate for success and is willing to bring in anyone that he thinks will make a positive impact. He tried the new-age approach of bringing in the young, offensive-minded coach and that did not work, so he won’t be too held up on that strategy.

Liam Coen is another name that has been thought of as a fit in Amherst. Coen was a quarterback at UMass from 2005-2008, and is now the offensive coordinator at Kentucky. He also served three years in the Los Angeles Rams coaching staff, but with the success he is having at Kentucky it is unlikely he’d take on all the problems that come with the Minutemen’s football program.

Bamford believes in the foundation Bell has placed and now wants his new head coach to turn it into some measure of success sooner rather than later with the advantages of the transfer portal. Bamford wants to be a 6-to-8 win team that contends for bowls yearly, moving down to the FCS is not and will not be in consideration.

Whether it’s because he is not fully prepared on such short notice or he wants to keep everything close to the vest, Miller had very little to give to media Monday. Miller has not had head coaching responsibility before, so we will have to wait until Saturday to see what changes.

Miller did not say much in terms of what will change for the remaining three weeks of the season. He did say his players were emotional yesterday, which is a given knowing most of them are connected to Bell. All he would say about his coaching is that he is focused solely on one day at a time, as just about every coach loves to say.

Two of the three remaining teams left on UMass’ schedule are very low caliber. Nobody expects them to compete with Army, but the real test of short-term improvement will start this week against Maine and then continue in three weeks against New Mexico State.

Expectations are very low, and it is more likely than not that the Minutemen don’t win a game to finish out an underachieving season.