Seniors’ final game at McGuirk was another embarrassing loss 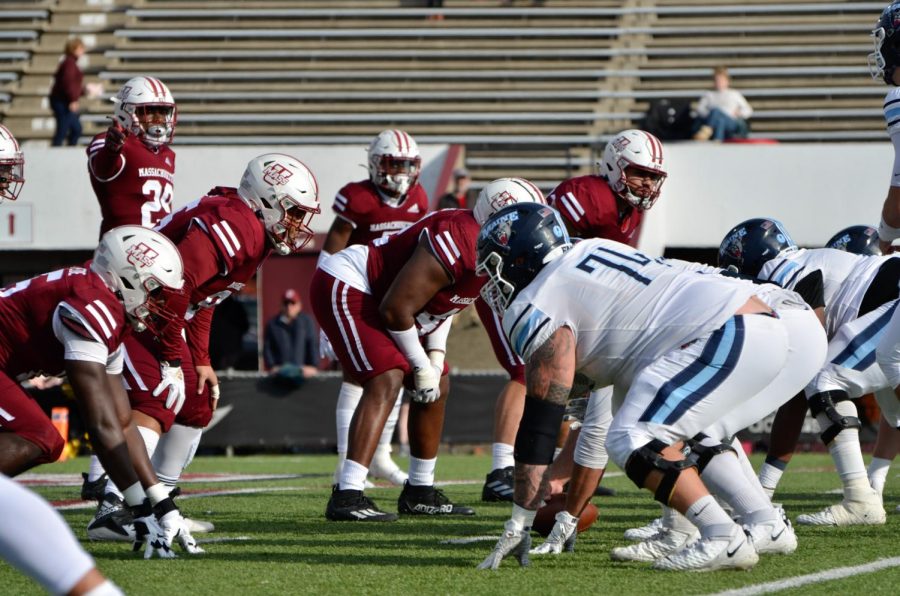 The Massachusetts football team honored five players for Senior Day ahead of Saturday’s 35-10 loss against the University of Maine. Willie Allen, Eric Collins, Evan Deckers, George Georgopoulos, and Avien Peah were recognized with their parents as some of the rare seniors and graduate students on UMass’ young roster.

While Allen and Collins transferred to UMass, Deckers, Georgopoulos, and Peah have spent their entire collegiate career with the program and watched a revolving door at the head coaching position. They saw the tail end of Mark Whipple’s time in Amherst, endured a painstakingly embarrassing 2-23 record under Walt Bell, and lost their final Homecoming game along with Senior Day to a pair of FCS teams that were paid over $600,000 combined to play the Minutemen under interim head coach Alex Miller.

Among all the possible critiques of the various coaches or Athletic Director Ryan Bamford, there’s no excuse for the seniors that chose to play here, stay here, and invested countless hours of time to never win more than one game in a season. Following the loss to Maine, the team refused to allow players to speak with the media for the second week in a row. Among those requested was Avien Peah, who would’ve been given a chance to reflect on his final game at McGuirk and offer his thoughts on the past and future of the program.

The timing of Bamford firing Bell and defensive coordinator Tommy Restivo the week of Senior Day shows how the seniors have been continually ignored and disrespected by the program. Bamford has always waited to make these changes until the end of the year but stated in a press conference that part of what went into the decision was allowing a prospective head coach to capitalize on the early Dec. 15 signing date in college football.

The issue is Bamford also admitted that most of his coaching targets are currently in positions of their own, and therefore aren’t focused on recruiting for UMass. He listed an arbitrary hiring date of Dec. 1 and said it would give that coach two weeks to work on building a recruiting class.

“We cannot miss a recruiting cycle,” Bamford said. “While I certainly would have hoped for better results and giving ourselves a chance to evaluate the entire body of work through 12 games, I felt like this was in the best interest of the future of the program.”

Admittedly, Bamford has a tough role to find a balance between trying to win whatever games you can as well as the bigger picture of thinking about the future of the program. But it’s a tough sell to say that a future coach, who may or may not be hired in time to contact and bring in recruits for a couple of weeks should take complete priority over the seniors and graduates. Those student athletes have dedicated so much to a losing program while Bamford takes chances on first-time coaches and agrees to a hefty contract extension.

Later in that press conference, Bamford said that he told the upperclassmen that he appreciated their work, commitment, and dedication to the team. He also told them that at some point, football ends for everyone and they at least have a valuable degree.

Causing complete chaos and unrest by firing their head coach and defensive coordinator right before Senior Day isn’t the best way for Bamford to walk the walk. Miller spoke to how hectic his role has been in the last few days as an interim head coach, especially as it pertains to figuring out the best method of assigning play calling duties.

“The beauty about when you get thrown in a fire like this is you see what burns and you see what doesn’t,” Miller said.

But if you’re Bamford, abandoning your current seniors and giving them little to no shot on Senior Day or the rest of the season while citing the possibility of having a few extra days to recruit come December as justification? That burns. That burns players like Peah, Georgopoulos, and Deckers for everything they have given to the program. It burns a bright light on the issues with the management of Massachusetts football.