Minutemen lighten up practice with one final game in 2021

Miller is looking to build a family bond within his team 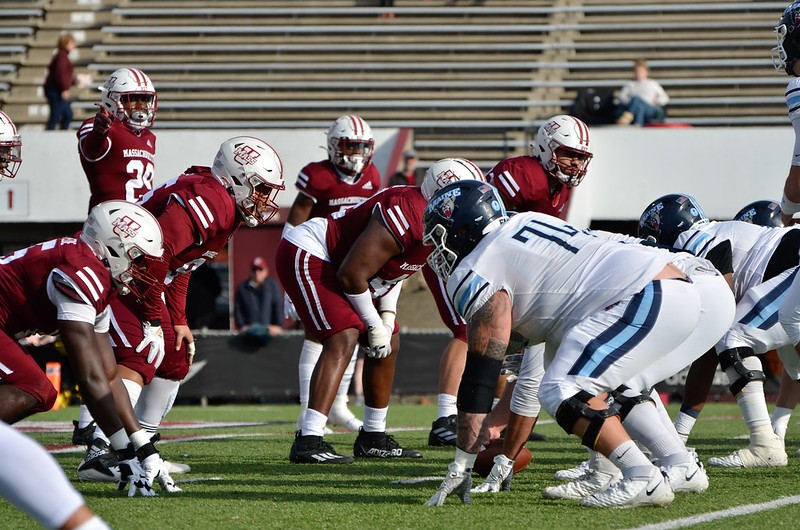 For the final time this season, the Massachusetts football team will suit up for a football game. Saying it was a tough year for everybody involved gently hints at the true strain this program has faced over the span of the previous 11 weeks.

From a 1-10 record to former head coach Walt Bell getting fired after a disappointing loss to Rhode Island, a Football Championship Subdivision (FCS) team. Bell being the coach whom many of which were recruited by. Along with the stresses of wondering if this team will find a home within a conference, these troubles have weighed heavily on the program, with one game of football splitting the troubling times and a fresh start, as Don Brown was announced as the Minutemen’s next head coach on Monday.

Interim head coach Alex Miller has emphasized having fun to close out the season, along with making sure the players feel like they are part of a family. Practices are shorter and starting 30 minutes later than normal, with Miller saying a prayer before the start of each one. Meetings during the day are slightly longer so players don’t have to come back for a second meeting at night.

The offensive linemen swapped and tried blitzing on defensive linemen earlier in the week at practice. Players also kept a tradition of swapping numbers with other players at practice. Brady Olson, who normally sports the number 12, swapped numbers with kicker Cam Carson, who wears number 91. Olson even kicked field goals to get into the spirit of the jersey number.

Brady Olson: what can’t he do? UMass had some fun swapping jerseys at practice, so he tried some kicks after practice pic.twitter.com/OZuq2tXVmF

Thanksgiving will also be a team-wide event, as there will be a turkey dinner after Thursday’s practice for the players that don’t live close enough to celebrate with their own families.

“When you get to the end of the year, especially if you’re not going to a bowl game or the playoffs in the FCS you just kind of make that last week fun and we’ve just been talking about doing stuff as a family,” Miller said. “So enjoying everybody for whatever days it is, that’s kind of what we’re doing right now and it does help. They get an extra half hour of sleep or little less practice like that is always good for the body.”

“Just changing some things up mentally tricks them… If you’ve played 11 games, there’s no tricks on the body. But tricks on the mind is definitely all we’re trying to do right now.”

The Aggies (1-10) have an identical record to the Minutemen this season. Their one win came against FCS team South Carolina State in week four. Though they have lost seven straight games since then, they have been far more competitive than UMass in their losses. With the exception a 59-3 loss against Alabama — who was placed in the No. 3 slot in the College Football Playoff rankings Tuesday and is far superior to any team the Minutemen have faced — NMSU has averaged 23.8 points per game in its other six games after the week four win, all against Football Bowl Subdivision (FBS) teams.

UMass averaged 13.8 points per game in the five games following its week six win over the University of Connecticut. They have also gone through a quarterback transition, with Brady Olson taking a seat for Garrett Dzuro, who made his first start against Army since November of 2020, when the Minutemen fell to Liberty 45-0.

The 5-foot-11 redshirt freshman threw for 78 yards along with a touchdown and two interceptions on 7-of-13 passing against the Black Knights. He also ran for 31 yards on 11 attempts and fumbled twice.

“I’m trying to really key in towards coverages and being able to protect the ball,” Dzuro said of what he looks to improve in the closing moments of the season.

While the passing situation has been subpar for UMass, the rushing attack has been the backbone of its offense. Ellis Merriweather has been the star of the show with 970 yards on the season after adding 110 yards to his total in the loss to Army, his fourth consecutive game over the century mark.

Other runners such as Josiah Johnson and Dzuro helped contribute 199 yards on the ground against a team in Army that is top-20 in rushing yards allowed, giving up 113.7 per game.

A week after facing one of the most run-heavy teams in the nation, the Minutemen have an opponent that attempts the fifth most passes per game in the country against the Aggies in Los Cruces at 3 p.m. on Saturday.