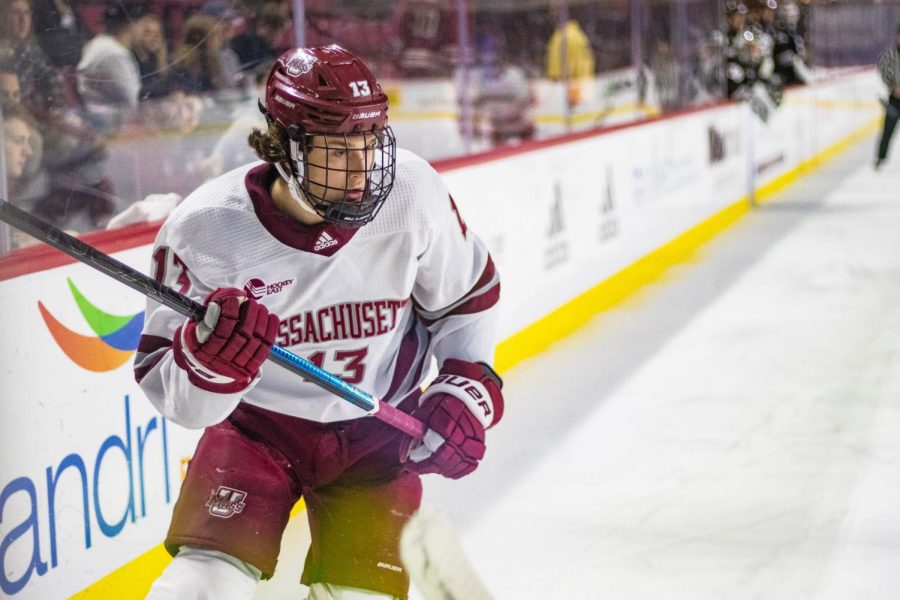 Cal Kiefiuk, Reed Lebster and Anthony Del Gaizo displayed teamwork and strength over the weekend against Providence, leading the Minutemen (6-2, 3-0 Hockey East) to two wins against the seventh seeded team. The second line was responsible for the three goals in Saturday’s matchup.

“I wanted to put [Del Gaizo] with [Lebster] and [Kiefiuk] because he gives them some toughness,” UMass coach Greg Carvel said. “I think that would help them be better players. I think [Kiefiuk] been really good and he’s quietly been a very good, effective player.”

Del Gaizo opened Friday night’s game taking the opening face-off and delivering a huge hit against a Friars (6-5, 3-3 HEA) player, setting the tone for his level of play throughout the weekend. His physicality carried over into Saturday.

“He’s as hard of a kid as we have, and he brings that every night,” Carvel said. “He usually is the guy we move up the line up to plug holes.”

Del Gaizo won 12 faceoffs on Saturday, one of which led to the Minutemen’s first goal of the night.

“[Del Gaizo] just adds a lot to our lineup,” Carvel said. “Not always on the score sheet but playing big strong heavy minutes.”

Kiefiuk opened the scoring in the first period and finished the night adding two assists to his total. Known for his ability with the puck, Kiefiuk was tasked with his movement off the puck to play better defense, and that has been a changing factor this season. He is a quiet player, but his importance to the second line and his contributions to the team are shown through his style of play and his work ethic.

Carvel expressed wanting to see more from Lebster after Friday’s game, despite a strong first period where he displayed his speed. On Saturday, Lebster registered an assist on the goal scored by Slava Demin in the third period. Minutes later, Lebster managed to get the puck past the hands of Providence’s goaltender Jaxson Stauber and give his team a comfortable lead with just under 14 minutes remaining in the game. It was here that the Friars would have a complete break down on defense, with UMass scoring two more goals to finish the game, winning 5-1.

“The reason I want to see more [from Lebster is]because I know he’s as good a goal scorer as we have,” Carvel said. “He can shoot the puck and I just wanted to see him be harder, better in battles, because I know when you start winning battles, you start scoring goals.”

Kiefiuk and Lebster are in their third season at UMass, and it is during this season that Carvel is starting to see the true impact they have on the team. Lebster took six shots over the 60 minutes of play, five of which were on goal. This was a considerable difference from Friday night, where he was unable to get a single shot off. Returning to the team, they are tasked with teaching the new players the style of play for the Minutemen and it is in the series against Providence that their true ability was showcased.

UMass will continue with Hockey East play on Friday, traveling to take on Boston University. Puck drop is set for 7:30 p.m.