Looking at UMass’ weekend down in St. Petersburg 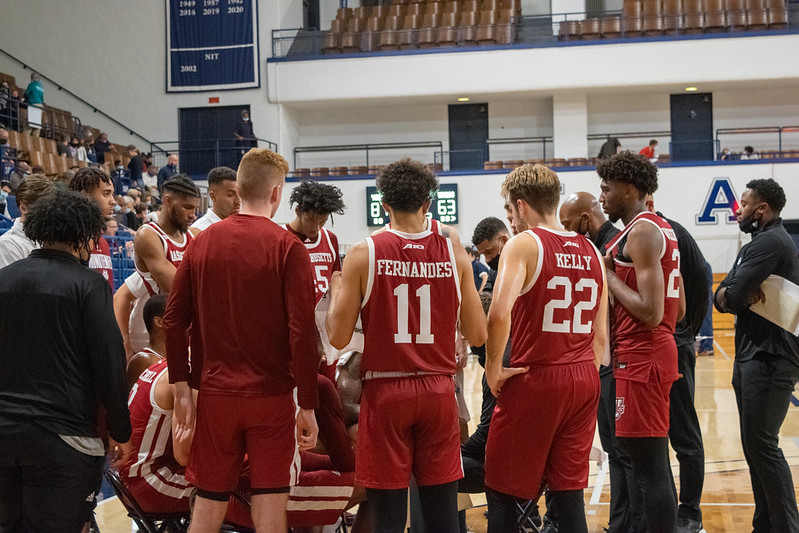 Welcome back to the return of Starting Five.

To put it mildly, it has been a rocky first couple of weeks for the Massachusetts men’s basketball team. The program has felt early season highs thanks to an opening night win over UMBC as well as a commanding victory against Penn State at home. Those highs have quickly vanished though. After a span of losses in the Jersey Mike’s Classic along with a blowout road loss to Yale, supporters of the team have been left questioning the true identity of the Minutemen this year.

Without rambling on more, let’s head into the film and break down where UMass has been successful and where the team has struggled.

It shouldn’t be a surprise that the first topic we are talking about is UMass’ perimeter defense. Opponents in the Jersey Mike’s Classic averaged a 51.9 shooting percentage from beyond the arc. The Minutemen’s two losses came against Weber State and Ball State. The two schools went a combined 20-of-36 from deep (54 percent) against UMass’ defense. The Minutemen didn’t shoot over 50 percent in the tournament in the three games.

Take this example where UMass is a 2-3 zone on defense. C.J. Kelly does a pretty good job getting himself in front out on the perimeter but then when the ball is passed to the elbow, he shifts his focus towards the free throw line where there is already three defenders in the area going for the trap. The ball is then kicked out to Jalen Windham in the corner who has the space he created with C.J. Kelly diverting his attention to the ball.

This next possession UMass is just completely lost on defense. The ball is quickly dished down into the paint and panic ensues after Tyler Cochran pivots and swings it back out to Demarius Jacobs at the top of the key. Noah Fernandes races over after seeing no one is on Jacobs, but before that there isn’t a defender within range outside of Buttrick who is five feet away at the free throw line.

I don’t think UMass’ 3-point defense will be fixed overnight. McCall has emphasized the point of needing improved energy and focus on defense which I think will progressively come as the season lingers on.

“Teams are shooting a ridiculous percentage from the 3-point line right now against our defense. We are going to have to come up with an identity and figured that out,” McCall said after the loss on Sunday to Ball State.

2. Dibaji Walker is coming for that four-spot

A lot has been talked about so far with the Minutemen losing three of their starters from last year’s squad, but rightfully so given how valuable Tre Mitchell, Ronnie DeGray and Carl Pierre were. Fernandes is the lone returning game-to-game starter, but aside from that McCall has mixed in some transfers along with returning sophomores into the starting five. The backcourt of Rich Kelly and Fernandes has been successful to start the season along with Buttrick down at the five-spot, but with Steadman still out, the three and four-spots have been interchangeable.

Currently with Steadman out, the lineup of Rich Kelly/Noah Fernandes/T.J. Weeks/Dibaji Walker /Trent Buttrick is an intriguing option and one that McCall should consider. Walker has an infectious energy off the bench which plays into whether its preferred to have him start or come off the bench. He brings a rebounding ability, can shoot the three ball at a respectable clip, can drive to the rim with confidence and aside from getting into foul trouble early, he’s one of UMass’ best defenders.

This play below is a testament to Buttrick’s ability to drive baseline and create an offensive opportunity but everything in this play is about Walker’s desire to get a shot off. He’s not going to consistently drop 15 points a night or get you five or more rebounds, but one thing is certain and that’s his effort when out on the court.

Walker’s shown he can be clutch too. He drained this 3-pointer with a minute and 17 seconds remaining in the game which at the time gave UMass the lead until UNC Greensboro followed it up with a three for itself. And this is another example of the offensive opportunities Rich Kelly creates. He drives to the free throw line drawing in two defenders on him which then opens up space for Walker at the top of the arc. Without even a dribble, Walker catches and shoots the open three ball. He definitely has one of the smoother looking strokes on the team.

When Steadman returns the chance for Walker slotting into the four-spot in the starting lineup will be slim but for now he is proving that he can be a difference maker off the bench.

TJ Weeks started the season with a 16-point performance against UMBC. He went 1-of-4 from deep, but it seemed like he found a different part of his game in driving to the rim and getting to the free throw line. Weeks had the most free throw attempts in the first game.

Freshman year T.J. Weeks would’ve taken the 3-pointer with the open space he had, but now, as a more experienced player, we see Weeks pass up the chance for the three to drive to the basket and draw the foul.

After the season opener, Weeks followed that game up with three points against Yale, and no points at Penn State. In the Jersey Mike’s Classic Weeks found his groove again. Maybe it came after he was replaced in the starting lineup by C.J. Kelly. He finished with eight points in the first two games and a season-high 19 points in the finale of the tournament.

Now check out these two plays by Weeks because they speak to the skillset he brings on the floor. UMass is down four, scrambling to get a shot off late in the game and a deflected pass goes into the area of two Ball State defenders. Weeks cuts over, beats out the defenders and secures the ball which forces McCall to call a timeout. I mean just look at how gassed he is. Weeks was the sole reason UMass within reach of the lead down the stretch.

This next one is just pure skill and physicality. Look at the point where Weeks is when Walker puts up the three. The ball is halfway in the air on the shot and Weeks is just starting to cut to the basket. He snags the rebound with his left hand and then sinks in the floater.

The three ball will eventually drop for Weeks as the season progresses, but right now he is displaying that he can be much more than just a threat from beyond the arc.

There is no denying the fact that Trent Buttrick has been UMass’ best player this season. He leads the team with 95 points through six games, has put up double digits in each of the teams six games and has provided somewhat of a defensive presence down low in the paint while the squad is without its forward Michael Steadman.

By no means can you say that Buttrick is a replacement to Tre Mitchell, but through six games it isn’t outlandish to say that he will be a serviceable big man for UMass this season.

As Buttrick put it earlier in preseason, “it’s a sense of freedom” in the role that head coach Matt McCall has given him on the court.

“I feel like I’m allowed to do more, allowed to showcase some more of my skills so I feel like that’s opened me up more as a player back to what I was like in high school,” Buttrick said.

We’ve seen that in his confidence with taking 3-point shots. He’s not afraid to stay outside on the perimeter and has shown that he can be a consistent threat from deep.

In two of the three games down in St. Petersburg, Buttrick tied his season high in points scored and fell just one point short of it in another outing.

The play above is exactly what McCall has mentioned this year: driving to the rim to create some offense and shake up the defense and then kicking the ball out for the open shot around the perimeter if it’s a viable option.

5. Fernandes putting the team on his back

What Fernandes brings to UMass on the court is unmatched. He’s a dominant ball handler who can facilitate and create offense, a player who can lead the team in scoring game after game and he’s a leader on the court.

At times it seems Fernandes can make something out of nothing. Here Buttrick misses the three but it’s a great find by Fernandes with a bullet of a pass from across the arc.

Outside of Fernandes’ passing game is his ability to take over a game. He’s the type of player a team can rely on down the stretch. In the game against UNC Greensboro he finished with a career high 25 points on 4-of-9 shooting from three and showed that he can be that clutch guy for UMass. With Mitchell gone, a lot of the weight in crunch time lays on the shoulders of Fernandes, but he is more than up for the challenge.

Fernandes is right behind Buttrick in total points scored this year with 91. The two are almost thirty points ahead of the rest of the team. A backcourt of Fernandes and Rich Kelly paired with Buttrick in the post will be successful if the pick-and-roll generates space and chances.

UMass may be still searching for that right lineup but one thing is known and that is Fernandes is the leader of this squad.