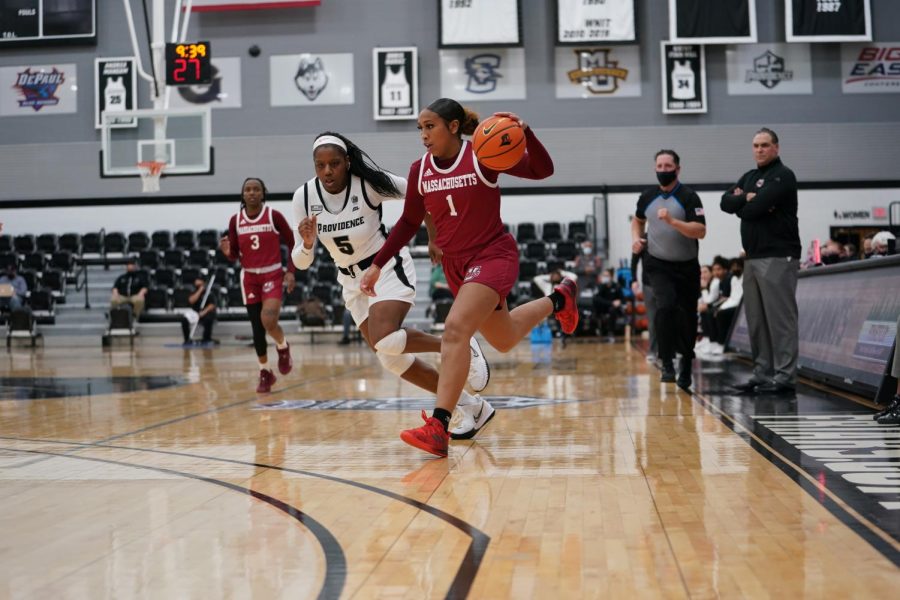 With four minutes remaining in the fourth quarter on Tuesday night, Sydney Taylor drove baseline and swiftly scooped the reverse layup securing her 26th point of the night, one short of her career-high.

Despite the personal statistic looming over the head of Taylor for the following minutes, Taylor never once forced a shot in attempt to secure point number 27. As she looked up briefly and eyed the net from behind the arc with two minutes to go, the ball was sent into the hands of another player on the Massachusetts’s women’s basketball team and not into the basket herself.

After sitting down with a warmup shirt on and water cup in hand, Taylor finished the battle against Providence (1-4) without a new career high. Even without the accomplishment, Taylor’s performance in UMass’ (5-0) fifth win of the season was the difference between a win and a loss.

“I thought defensively, [Taylor] had an outstanding game on Janai Crooms,” head coach Tory Verdi said. “She did a great job of staying in front of [Crooms.] Our goal was to contain her dribble penetration and not allow her to get to the basket and [Taylor] did a tremendous job [on defense.]”

Crooms, the 5-foot-10 guard for the Friars, has scored in double digits every game so far this season. Coming into Tuesday’s match up, Verdi knew it was crucial to lockdown on Providence’s lethal weapon. Taylor, with assistance from knowledgeable Minutewomen who knew to play help defense and clog the lane, prevented Crooms and her team to stop scoring for a valuable amount of time. Crooms finished Tuesday’s game with 10 points, going 4-of-11 from the field.

Taylor, whose rhythm tends to form from downtown, saw her game develop from not only both sides of the ball but multiple types of offense as well. An early layup was followed by two early missed 3-pointers until Taylor saw it go through the net from deep two minutes into the second quarter.

Once UMass began to find its identity, after looking lost when Providence pushed the tempo, Taylor’s defensive energy and momentum carried. To close the second quarter, Crooms was in the corner with Taylor playing high pressure defense. In attempt to beat her defender, Crooms displayed a tricky set of handles to skillfully pass Taylor’s swarming defense but failed. As the Minutewomen rose, while Crooms looked like she couldn’t get passed Taylor, screams echoed through Alumni Hall when Taylor poked the ball away. The mad scramble of maroon and white jerseys trying to gain possession eventually ended with the ball in Taylor’s hands.

“It makes me feel like we’re doing our job,” Verdi said of Taylor’s defensive performance. “We’ve been working with her for the last three years to play some good solid defense. She’s bought into our program … there is a reason why we are having success and it is because of what she is doing.”

As UMass began to gel in the latter half and play off each other, the lead expanded. After Taylor jumped out to pick off a pass from a Friar, Destiney Philoxy’s circus layup gave the Minutewomen a 44-36 lead. The play after, Ber’Nyah Mayo sunk a 3-pointer to push the lead to nine. Taylor finished with three steals.

To bookend her defensive clinic, on offense Taylor went 3-of-12 from behind the arc, 10-of-22 from the field and finished with two offensive rebounds. Knowing that Providence was looking to equalize the game in any way it could, Taylor continued to attack the post players and get herself to the line. Once she got there, she shot 75 percent. Taylor punched in her highest scoring night of the season thus far, after scoring 25 against Iona and 13 against Holy Cross on Friday.

“We have seen games where she hasn’t played that well offensively,” Verdi said. “Regardless, if you don’t play well offensively you can still affect the game defensively but tonight, she did that on both ends of the court. I’m super proud of her effort.”

UMass heads to Florida with an undefeated record to face South Dakota State on Friday. Tip-off is scheduled for 11 a.m.