The Curry Hicks Cage has a ghost problem

Exploring a gymnasium with the most elegiac of auras 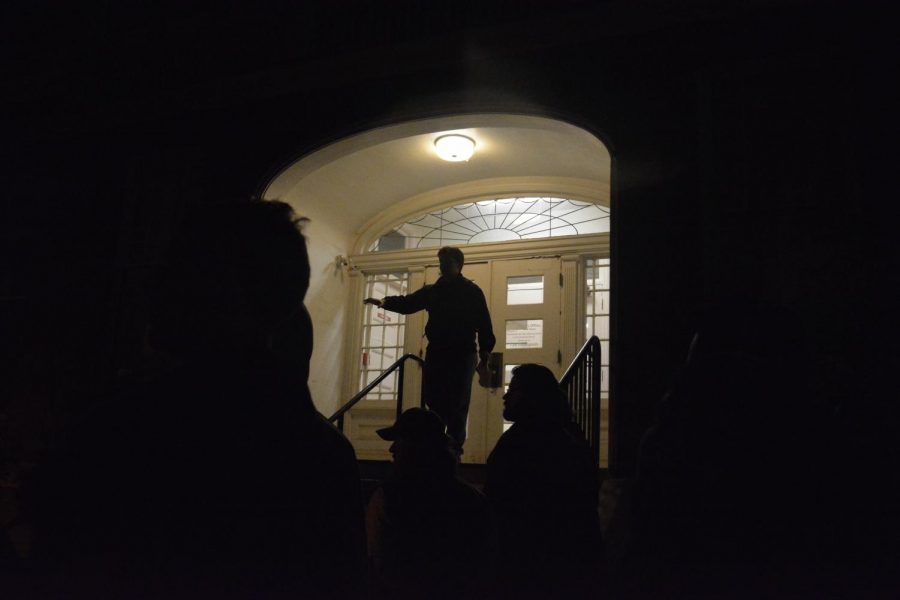 Thanks to the recent end of daylight savings time this year, dusk now settles in at 4:30 p.m. This increase in nighttime hours has caused an uptick of student reports of paranormal activity in our very own Curry Hicks Cage.

The Curry Hicks Cage, often referred to as “Curry Hicks,” “the cage,” or “the worst gym on campus,” is an athletic facility at the University of Massachusetts built in 1931. Like many pre-World War II era buildings on campus, Curry Hicks underwent a postmodernist renovation during the 1980s. This included laying actual hardwood onto the 50-year-old dirt floor and installing a skylight into a region of ceiling that lies directly in the shade.

Despite the University’s efforts to renovate the Cage and align it with ever popular “concrete-core” aesthetic of buildings across the campus, this gym remains shrouded in its own unique mysteries.

We spoke to Angela Bly, a senior color guard member who recalls practicing at the Curry Hicks basketball court. She was throwing a pop toss when she reported feeling a sudden chilly and ominous wind waft around her.

“Usually, I wouldn’t think anything of it, I mean, considering how drafty most of the buildings on campus are,” Bly explained. “But the air in Curry Hicks is nothing but stagnant and humid. Only something paranormal could cause any sort of air circulation here.”

Sandra Foxtrot, a junior member of the Reserve Officers’ Training Corp is often at Curry Hicks for 6:00 a.m. physical conditioning.

“We were playing dodgeball when all of a sudden everyone started dropping like flies,” Foxtrot said.

University Health Services claimed that they had fainted due to inhalation of noxious floor polish and paint chip fumes.

Foxtrot and other ROTC members recall seeing visions of shadowy figures and flashing colors moments before blacking out.

“UHS can tell us that we were just hallucinating from the inhalants, but I’m more willing to believe in ghosts than anything that Health Services tries to tell me,” Foxtrot said.

The basketball court isn’t the only section of Curry Hicks with haunted happenings — a majority of supernatural reports have occurred at the pool.

“I blinked and I swear that the black mold on the door sign for the women’s locker room spelled the word HELP,”says freshman swim club member Olympia Gould. “And are we even sure that all that dried reddish-brown stuff on the walls is actually rust? I mean, did anyone even try to shine a blacklight in there?”

“Legend has it that if you flush the toilet in the women’s bathroom three times at dusk, the spirit of the pre-Title IX-era swim team will grant you a wish,” Line stated.

Line attempted to flush three times but was forced to evacuate the lavatory when the toilet began to make sinister gurgling noises and overflowed after the first flush.

“I thought that bathroom ghosts were supposed to be benevolent, y’know, like Moaning Myrtle with Harry Potter at the opening to the chamber of secrets. There’s a ghost in that bathroom alright, but the only thing it wants to bestow is water damage and fear.”

“I don’t think it’s the ghosts we have to worry about. That’s no ordinary locker room. That’s a dark, liminal space,” shuddered Tide. “There’s something about the greenish fluorescent lights, the suspiciously slimy tiles, the nine-foot ceiling, the way the rusted, steel walls seem to stretch onwards towards some chlorinated oblivion that reminds me of the spiraling, eternal landscape of some sort of nightmarish fever dream.”

“Time is not what it seems in that room,” Tide said.

We sent in a private team of daytime television “ghost hunters” to take EMF readings of the Curry Hicks Pool. EMF readings consistently remained at zero throughout the entire building, but this could easily be due to the concrete slab walls that are so thick neither light nor electromagnetic frequencies of any kind can permeate them.

The ghost hunting team returned to Curry Hicks in the middle of the night for follow-up readings. We have neither seen nor heard from the team since then.

What has the UMass administration done to help?

Last week, the university building maintenance department encircled the building with a line of salt, which is said to keep spirits at bay according to Wiccan tradition. Unfortunately, New England ghosts have become quite accustomed to there being an excess amount of salt on roads and sidewalks, so this strategy had little effect.

In 1984, the university building maintenance department established the UMass Paranormal Investigation & Surveillance Squad (UPISS) in response to the Ghostbusterscraze. Although funding for UPISS was cut in 1985, it seems clear that UMass needs to bring this department back in order to effectively address the current hauntings.

The twenty or so students that go to Curry Hicks should not have to put up with these conditions. Unless the university takes action, the hauntings of Curry Hicks are expected to continue.

Kelly McMahan can be reached at [email protected]