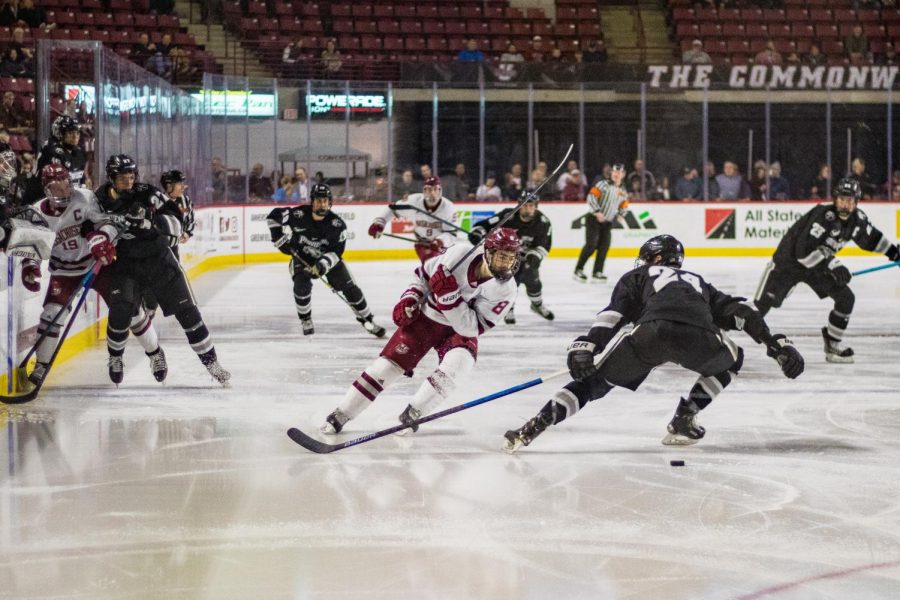 The Massachusetts hockey team knew coming into this weekend that the matchup against Providence was going to be a challenge, and the Minutemen (5-2, 3-0 Hockey East) were not mistaken. The game remained scoreless through 46 minutes of play, until freshman Scott Morrow’s goal gave UMass the 1-0 lead .

“You know when you play Providence it’s going to be a low scoring game,” head coach Greg Carvel said. “Two teams that try to defend really well, lot of integrity in both teams play so I would expect it would be low scoring tomorrow and hopefully we come out on the right side.”

On Jan. 22, 2021 a similar game was played between the two rivals, with a comparable outcome. In the first game of the weekend matchup, UMass and Providence battled throughout 65 minutes of play, but the game remained scoreless, forcing a shootout. The New York Rangers prospect Brett Berard was responsible for the extra point last season for the Friars, but struggled on Friday night, registering only three shots, with one on goal.

On Jan. 23, 2021, it was once again a long time before either team found the back of the net, and another shootout was needed to settle the 1-1 tie. UMass was determined coming off the loss from the previous night and came away with the extra point. On Friday night, the Minutemen were able to save the team stress with a goal in the third period, avoiding a shootout.

“When we play Providence, it’s going to be series like this,” captain Bobby Trivigno said. “The biggest difference is the rink. It’s way smaller than ours, so things are going to happen a lot faster. Just got to play our standard and everything should take care of itself.”

UMass’ scoring troubles in last season’s game was in part due to the amount of time it spent in the penalty box. However, tonight neither team spent any time in the penalty box until the third period, despite the physicality present. Tensions ran high and the obvious frustration from the Friars in the final 13 minutes of play resulted in Parker Ford being sent to the box for hooking, and Providence was unable to find the equalizer.

“It was prison rules,” Providence head coach Nate Leaman said. “We had a guy get cross checked and the stick broken over and it wasn’t a penalty. So, it’s prison rules out there and it is what it is, and you have to battle through it.”

The ability to continue play was something Trivigno enjoyed about Friday’s matchup, with the referees letting the level of physicality continue. Trivigno hopes this will continue through Hockey East matchups. With all the teams in the conference having played each other so many times, the rivalries allow for many competitive games with each team battling it out.

UMass will continue its series against Providence with a 7 p.m. matchup on Saturday night. With a game on the road in a smaller rink, the Minutemen will have to make adjustments and come out of the gate strong, as the Friars will be hungry and determined to fight back and get one win on the weekend.

“[Saturday] night will be the next challenge in the smaller rink,” Carvel said. “This is the tough part of our league, you often play the same team and it’s tough to beat the same team twice.”

Sophie Weller can be reached at [email protected] and followed on Twitter @SophieeWeller.