Minutewomen record their first win over the Friars since 2004 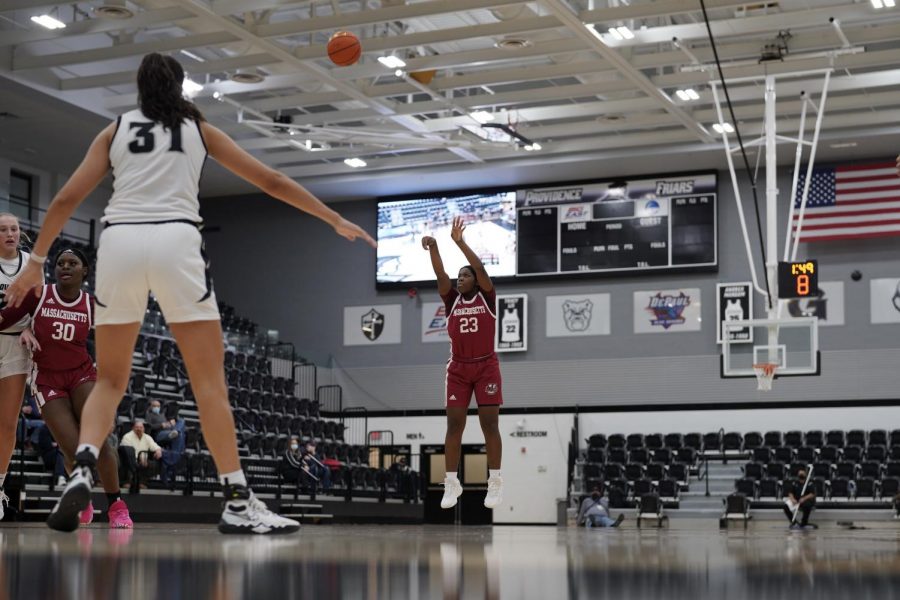 Coming off an unpleasant, nail-biting win against Holy Cross, the Massachusetts women’s basketball team turned it around against Providence on Tuesday night.

A big part of its success was the Minutewomen’s (5-0) ability to dominate the glass and out-rebound the Friars (1-4) 49-33, with 19 being offensive boards.

Sydney Taylor stuffed the stat sheet and was the game’s leading scorer, as she finished with 26 points, five rebounds, three assists and threesteals. Angelique Ngalakulondi and Makennah White also played a vital role in UMass’ success on the boards. Ngalakulondi had a double-double off the bench with 17 points and 11 rebounds, while White finished with 12 points and seven rebounds.

“[Ngalakulondi] did it all for us tonight,” head coach Tory Verdi said. “Both her and [White] on the boards did a great job for us. They gave us not only defensive rebounds, but they gave us offensive rebounds and put backs.”

UMass took an early 6-0 lead, but faced adversity when Providence responded by going on a 20-6 run to end the first quarter. The Minutewomen struggled to get points on the board, going a combined 6-of-20 in the first quarter.

The Friars had a clear grip on the game early on, scoring in the paint with ease, and knocking down triples at a high rate. They were also very skilled at drawing fouls, which UMass has had difficulty preventing so far this season. Providence was awarded several trips to the free throw line in the first half and converted 7-of-10 attempts.

Late in the second quarter, the Minutewomen were able to string together a couple of crucial stops and knock down some big shots. The run had Taylor’s fingerprints all over it, as she proved she can contribute to various areas of the game. Taylor had two 3-pointers in the quarter, and contributed on the defensive end, giving her defender no space to shoot, and clamping up when they attempted to drive to the basket.

Momentum carried over in the second half, as UMass continued to play stellar defense. The Minutewomen gave the Friars no room to operate in the paint, and successfully closed out on the perimeter. Their solid defense also converted into good offense, as Taylor perfectly timed a steal on an inbound pass, then outraced two defenders for the easy bucket.

While the game seemed like a runaway towards the end, Verdi did not treat it as such. He could be heard audibly yelling in the huddle, encouraging the Minutewomen to finish strong. Sure enough, it was all gas and no brakes, as their first possession to start the fourth quarter lasted 50 seconds. They snagged three offensive boards during the extended play and Ngalakulondi was able to knock down both of her free throw attempts after being fouled.

To start Tuesday’s game, minimal smiles were shared but the Minutewomen could be seen exchanging smiles with each other early in the fourth quarter. The entire team showed up and showed out in opposing territory and were rewarded with a big win.

“We need everyone,” Verdi said. “If you’re not in the game and it’s not your night, you’re still involved. You’re cheering and you’re bringing energy because energy is infectious …  Regardless of your situation, you can still impact the game somehow, someway.”

This win keeps the Minutewomen’s unbeaten season alive as they travel to Southwest Florida for the Gulf Coast Showcase.

“Regardless of who we’re playing and when we’re playing, we just need to play UMass basketball,” Verdi said. “When we do that, we’re pretty good.”

UMass is set to take on South Dakota State on Nov. 26. Tip-off is scheduled for 11 a.m.

Michael Araujo can be reached at [email protected] and followed on Twitter @araujo_michael_.