UMass defenders shine in A-10 tournament despite 4-1 defeat

Jouvenel and Kane selected to A-10 tournament team for defense 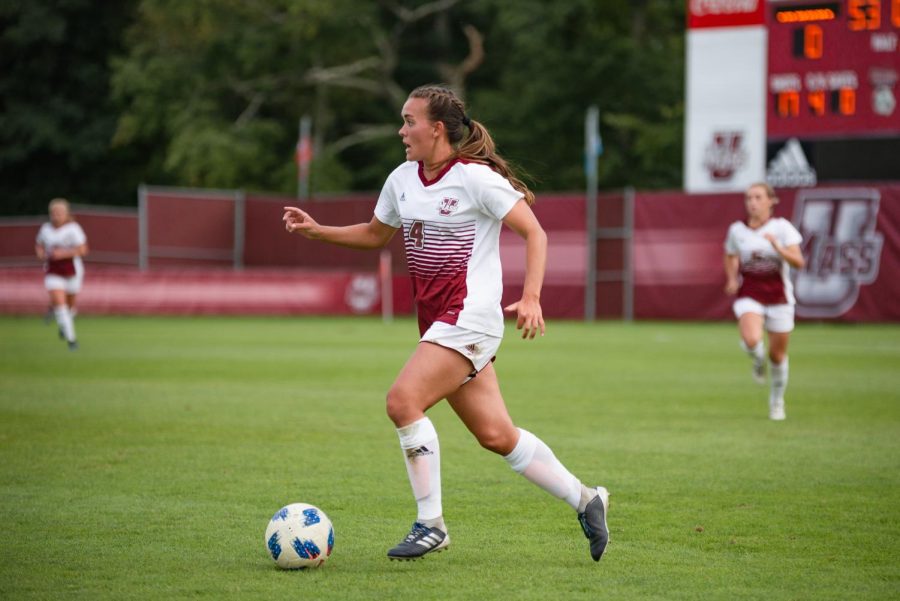 Despite a 4-1 loss to Saint Louis in the championship match of the Atlantic 10 tournament, the level of defensive intensity the Massachusetts women’s soccer team came out with during the match put pressure on an offensively potent Billikens (12-8-1, 7-3-0 A-10) team.

“You have to be good defensively against a team like Saint Louis, that is very offensively focused, they get forward fast, they put pressure on teams,” head coach Jason Dowiak said.

UMass’ (11-6-4, 5-3-2 A-10) success this season was due in large part due to its  ability to consistently come out with strong defensive performances. Such performances have often been led by co-captain Ava Jouvenel and Fiona Kane, who were both named to the all A-10 tournament team.

“When you have two defenders that get selected by the media in the conference, as two of the best players in out of the entire tournament, even though we gave up four goals today, I think that says a lot about what our group achieved early on in this game,” Dowiak said.

In Sunday’s 4-1 loss, the Minutewomen came out early with strong defensive pressure towards the attacking Saint Louis team who only managed to score one goal in the first 60 minutes of the match. Unfortunately, that pressure was not sustained for the rest of the match where the Billikens managed to put three goals past the Minutewomen.

“I think we put the pieces on offense and defense together really well for the majority of the game until the last about 30 minutes when they got that second goal and then we had to make adjustments,” said Dowiak. “You play a team that’s been here four years in a row, they know what it takes, they’ve got a lot of upperclassmen that have won in every year that they’ve been here.”

However, UMass displayed its character by still providing maximum effort regardless of how many goals it was down by. Senior Ava Jouvenel catalyzed many of the Minutewomen’s efforts by not letting up for the entirety of the 90 minutes she played on the field. Jouvenel not only made composed and smart defensive decisions to protect her goalkeepers but also provided opportunities in the attack when necessary.

“[Jouvenel], similar to Dani [Sclafani] last year, set an example of being willing, able, and capable of putting the game onto her back at times, in how she advanced up the field and how she set that competitive example,” Dowiak said. “It’s amazing to have leadership on the team like that. They understand what they have to do but to be able to also produce in a different way than they’ve been called upon in the previous games, I think just says a lot about what [Jouvenel]’s IQ and ability really is.”

Although the Minutewomen would have liked to have won the tournament, the season can be considered a success for the young team, who made its first A-10 appearance in 10 years. This success can be attributed not only to the overall talent of the team but also to the level of leadership shown by the few more experienced players. Jouvenel’s impact on the Minutewomen this year has been an undeniable fact that has drawn the team together and brought them many victories.

“[Jouvenel] is probably one of the most competitive players I’ve ever coached, she is in the greatest way stubborn and dominant and commanding,” Dowiak said. “She doesn’t allow people to take breaks and she holds people accountable. When you think about our level and at the professional levels of soccer, when you think about a captain and what their job is on the field- [Jouvenel] embodies that.”

“She holds people accountable, she says the tough things when they need to be said and she’s continued to hold that role really close to her heart because it matters so much to her. That’s a special quality to have in a player and that’s why she was our captain this year.”

Batanai Dhliwayo can be reached at [email protected]