UMass escapes with a 1-0 win over Providence 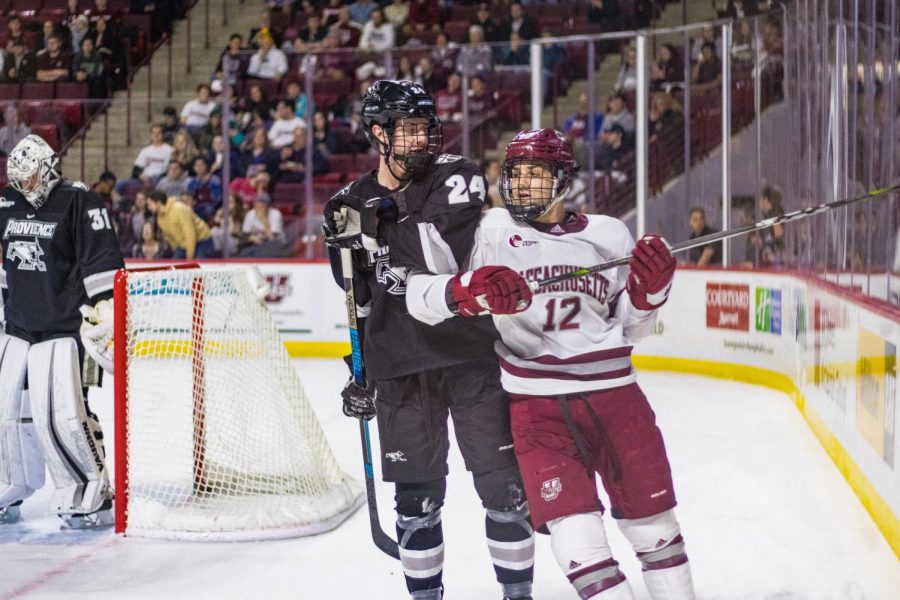 The Massachusetts hockey team edged out Providence, 1-0, on Friday night in a tightly contested battle between two of the best teams in Hockey East.

Physicality has been par for the course in HEA so far this season and that didn’t change on Friday night. Despite moving Eric Faith up to the first line center spot, No. 12 UMass (5-2, 3-0 HEA) coach Greg Carvel sent Anthony Del Gaizo to center ice for the opening draw to set the tone for the Minutemen. Del Gaizo delivered, leveling a Friars (6-4, 3-2 HEA) skater the first shift.

“It’s what [Del Gaizo] brings,” Carvel said of the senior’s physicality. “He is as hard of a kid that we have, and he brings that every night, and that’s why he’s usually the guy that we move up the lineup to plug holes.”

That physicality led to over 45 minutes of scoreless action before Scott Morrow broke the ice, taking a rebound shot into the wide-open top portion of the net. The freshman defenseman scored his first career goal to give UMass an overtime win over Merrimack, and he quickly added another one in a crucial moment.

“We’ve had a lot of good offensive defenseman here and he’s going to be near the top,” Carvel said. “He’s a tremendous offensive player and he needed about four games to figure out what he can do at this level, and you see he’s got tremendous confidence and his game is getting better without the puck too. So, that’s a pretty good combination.”

Grinding out a win required Matt Murray and the Minutemen defense to step up and hold firm on the scoresheet. UMass’ identity is built on strong defense but a new crop of talent in the backend needed time to get acclimated to that identity. Friday night was a step forward, with the Minutemen being very active and calculated with their sticks in the defensive zone to prevent high danger scoring chances against them.

UMass held the Friars to two shots on goal through the first period, preventing a fast start against it. And even when Providence began breaking through the defense and putting pucks towards the net, Matt Murray swallowed them all up, finishing with 27 saves and earning his first shutout of the season.

“It’s important just to get that confidence that we’re a good defensive team,” Carvel said. “I see our structure and details defensively are getting better, we still gave up a 3-on-1 with a minute to go in a one goal game which is inexcusable, but I’m seeing a lot more things that I like.”

Friday was the first game since 2014 and the first under Carvel’s tenure as head coach that the Minutemen were not called for a single penalty through 60 minutes. Only one penalty was called the entire game, but that final stat line was not indicative of the level of physicality before and after the whistle.

“There were a lot of things they could have called but the standard was at a point where it was going to have to be blatant, and I’m fine with that,” Carvel said.

UMass will refocus after the game heading into its second battle with the Friars on Saturday knowing that the physicality and competitiveness will only be amplified in the second meeting. Puck drop is set for 7 p.m. in Providence.