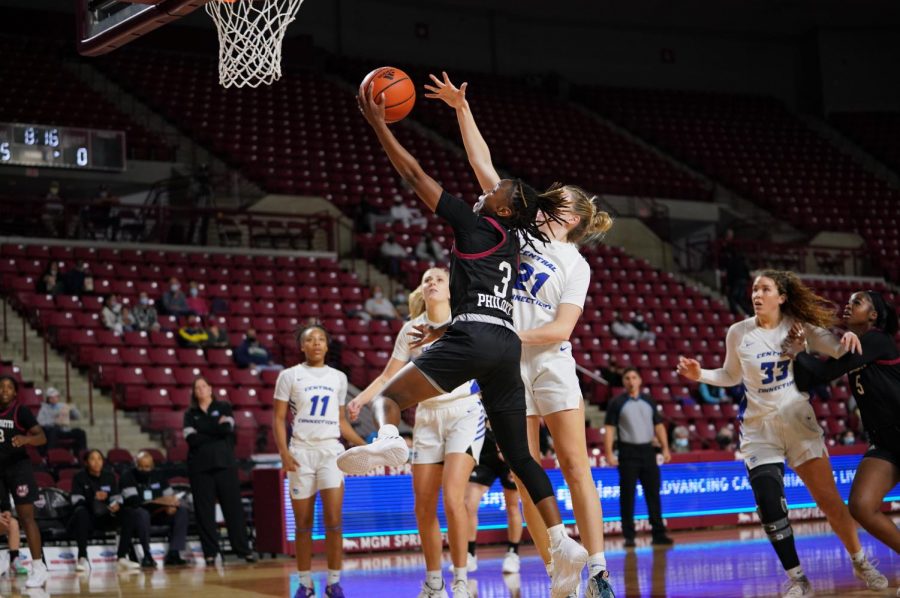 Sydney Taylor shot 64 percent from the field and led all Minutewomen in scoring with 16 points. Meanwhile, Sam Breen, Angelique Ngalakulondi, Destiney Philoxy and Ber’Nyah Mayo all had 15, 14, 13 and 12 points, respectively.

Last year, Philoxy totaled 156 assists, good enough to be ranked No. 8 in the nation, and first in the Atlantic 10 conference. Her flashy playmaking was on full display tonight, as she recorded a double-double with 13 points and 10 assists.

“Destiney’s our catalyst,” head coach Tory Verdi said of Philoxy’s contribution to the team. “She’s dynamic and the fact that she had 10 assists is unbelievable.”

Sophomore guard Mayo notched her first career double-double, tallying 10 rebounds to go along with her 12 points. Mayo played a key factor in the team’s success in the postseason last year, and she showed signs of taking another big leap forward tonight.

“I think her best basketball is ahead of her,” Verdi said. “The fact that she had 10 rebounds just shows you how competitive of a player she is. Both [Mayo] and [Philoxy] were terrific here tonight.”

While it was the starters who shined, the bench made a huge impact on the flow of the game. UMass had 29 bench points to the Blue Devils’ eight, and were led by freshman Stefanie Kulesza, who rattled home two three-pointers in the game’s final minutes.

“That’s the best part about having a bench,” Philoxy said of the bench’s big performance. “We can relax and have no worries when we sit down. As for last year, it was different because we had no subs and COVID-19 and all that stuff.”

UMass jumped out to an early lead in the contest, going on a 13-2 run to start the game. This was a result of excellent perimeter defense and closing out shots, as the Blue Devils shot 0-4 from 3-point land. The Minutewomen took the opposite approach on offense, as 22 of their 23 first quarter points came in the paint, with the lone point coming from a free throw.

Coming out of the half, the Minutewomen struggled. They lost two turnovers, and the Blue Devils got a wide open 3-pointer off a blown switch. Despite the early woes, Philoxy was able to get the wheels turning for her team. She nailed a moving mid-ranger from the elbow, then converted a tough and-one with a defender draped all over her. Philoxy followed it up with a terrific touch pass to Breen off an offensive rebound. From there on out, it was smooth sailing for the Minutewomen as they coasted to a dominating victory.

“We played as a team,” Philoxy said. “In the middle it was a little shaky… but we knew that wasn’t us. So, we just tried our best to play our basketball.”

Tonight was the Minutewomen’s first game with fans at the Mullins Center since March 2020. If this game was any indication, good things are ahead for the program.

“Coming back, getting on the floor and doing the things we did here tonight kind of shows you the type of team we can be this year,” Verdi said. “It wasn’t perfect. There’s a lot of things that we’re gonna continue to work on, but it’s a journey. This is our first stop, game one. And I thought it was a great stop for us here today.”

The Minutewomen will be back at the Mullins Center this Friday at 5 p.m. when they take on Harvard University.

Michael Araujo can be reached at [email protected] and followed  on Twitter at @araujo_michael_.