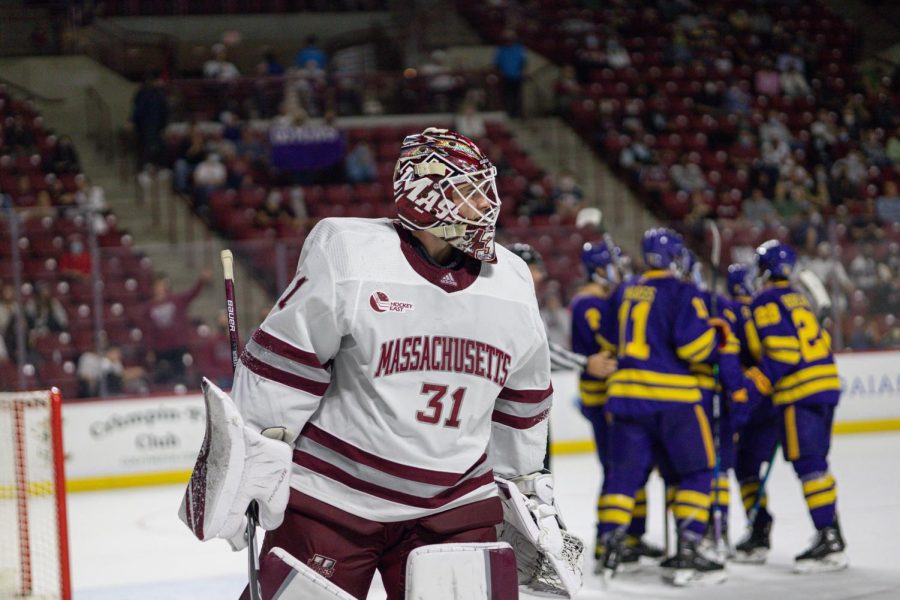 Coming off a successful weekend, the No. 8 Massachusetts hockey team will look to continue its six-game win streak with a series against Boston University beginning on Friday. Despite a slow start to their season, the Terriers (3-7, 2-4 Hockey East) are expected to provide UMass (6-2, 4-0 HEA) with a battle this weekend.

“BU will be the most talented team we’ve played so far,” head coach Greg Carvel said. “So, our defensive game is going to have to be really solid.”

In its opening series this season, UMass gave up eight goals over the course of two games. Since then, the defensive performance has improved with back-to-back wins against Providence, showcasing the skills of the defensemen and Matt Murray in goal. Carvel praised Murray’s efforts with him earning HEA goalie of the week after the series against the Friars, while also explaining that he has better structure in front of him with the defense able to prevent pucks from getting into his reach.

Despite Carvel expecting the Terriers to be the toughest matchup of the season thus far, he still wants the players to focus on their own skills and what the team can do better as a whole.

“For us, it’s just continuing to play to our standard,” junior forward Cal Kiefiuk said. “Not worrying about who we’re playing or who the opponent is, but focusing on ourselves, and I think if we do that, we’ll be fine.”

UMass has been able to generate many offensive opportunities. Bobby Trivigno and Garrett Wait work well together on the ice in the first line, with Eric Faith stepping up in place of Josh Lopina, who is sidelined with an injury and is expected to be out long term.

However, it was the efforts of the second line over the weekend that generated the most chances. Kiefiuk recorded one goal and two assists in Saturday’s game, Reed Lebster scored one goal and one assist and Anthony Del Gaizo added a level of physicality and earned two assists.

“They are just the next team,” Carvel said. “We got to continue to get better. We’re taking steps every weekend since opening weekend and we’re starting to see our defensive game come around which is great to see.”

Carvel expressed that offense was not a concern this season, but that he still sees room for improvement on the defensive side of the puck. Assistant captain Matthew Kessel has been a staple in the back line, skating with freshman Ryan Ufko. Fellow captain Colin Felix has been skating alongside Slava Demin, who transferred to UMass from Denver for his senior year. With two new skaters, they are learning the Minutemen’s style of play and continue to show improvement.

“We were really happy with the way we played last week against Providence,” Demin said. “Now shifting the focus to BU, the biggest thing is focusing on playing UMass hockey, which is playing hard, playing fast, being responsible defensively. I think last week we really took a step in the right direction, only giving up one goal in two games.”

The series begins with a 7:30 p.m. puck drop in Boston before the Minutemen return to the Mullins Center for their second game against the Terriers at 7 p.m. on Saturday.