The Minutewomen average a conference leading 45.3 rebounds per game 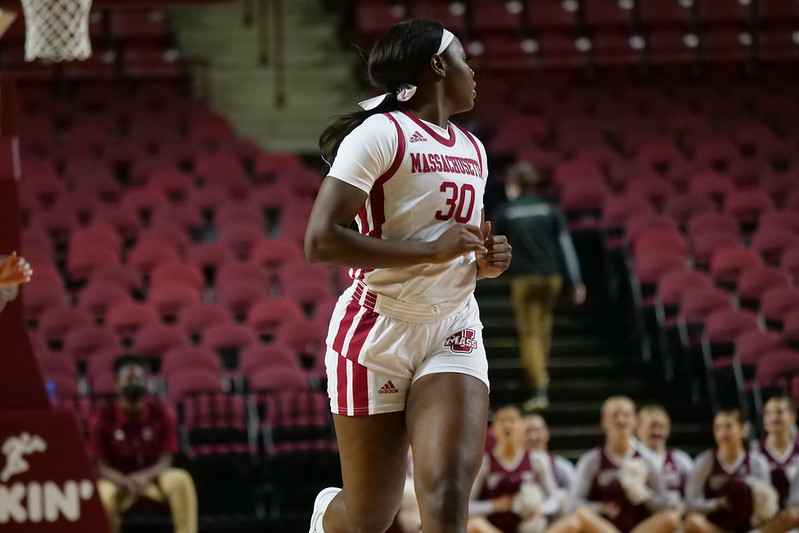 The Massachusetts women’s basketball team is at the top of the Atlantic 10 when it comes to rebounding the basketball. It showcased that ability Friday afternoon, out-rebounding South Dakota State 39-22 in the 81-63 victory.

The numbers also stand far above the number two and three ranked rebounding team, Rhode Island and Davidson, whose margins sit at 10.8 and 4.8 per game, respectively.

“From day one this year, we wanted to address rebounding,” head coach Tory Verdi said. “It’s something that we pride ourselves on and something that we’ve worked on each and every single day.”

The large part of the rebounding success can be attributed to the Minutewomen’s three-headed monster in Sam Breen (11.2 per game), Makennah White (7.2)  and Angelique Ngalakulondi (5.5). The forwards are constantly on the boards, and being aggressive down low. They compete for rebounds on both sides of the court, giving UMass second chance opportunities after offensive rebounds, as well as getting the ball out in transition after defensive rebounds.

All three have made improvements from their rebounding marks from a season ago. Breen averaged 10 per game, while White averaged 4.1 and Ngalakulondi hauled in 3.3 on average in the 2020-2021 season.

White is the tallest starter at 6-foot-2, leaving the Minutewomen without a true center. UMass hasn’t skipped a beat battling for boards regardless. The energy the frontcourt brings to the glass every game is infectious, and has begun to rub off on the backcourt.

Against South Dakota State on Friday, the aforementioned trio combined for 23 rebounds, while Sydney Taylor, Ber’Nyah Mayo and Shavonne Smith contributed 13 rebounds. Smith, the senior transfer from Towson University was praised by Verdi for her rebounding abilities, on both offense and defense. She had four rebounds of her own on Friday.

“You look at the things we’re doing, like [Ngalakulondi] doing an unbelievable job gobbling up rebounds for us,” Verdi said. “In the past, [our guards] had a tendency to hang out on the perimeter and just watch. It’s so important to get a piece of the paint when a shot goes up. That’s an instinct thing we have taught and we’ve gotten better at it… If you wanna be special [those] are things you need to do, and now we’re finally doing them.”

The Minutewomen’s rebounding totals have vastly improved this year, and helped establish this squad as an offensive juggernaut. While Breen is often looked at as the go-to scorer, several other players have made their mark on offense. Taylor, who finished with a game-high 23 points against South Dakota, has established herself as a perimeter threat who can finish at the rim. Starting guards Mayo and Destiney Philoxy had 12 and 11 points, shooting a combined 5-for-7 from three and 7-of-16 from the field.

UMass will take on the winner of the UCLA-Kent State game on Saturday in the semifinals of the Gulf Coast Showcase.

Michael Araujo can be reached at [email protected] and followed on Twitter @araujo_michael_.