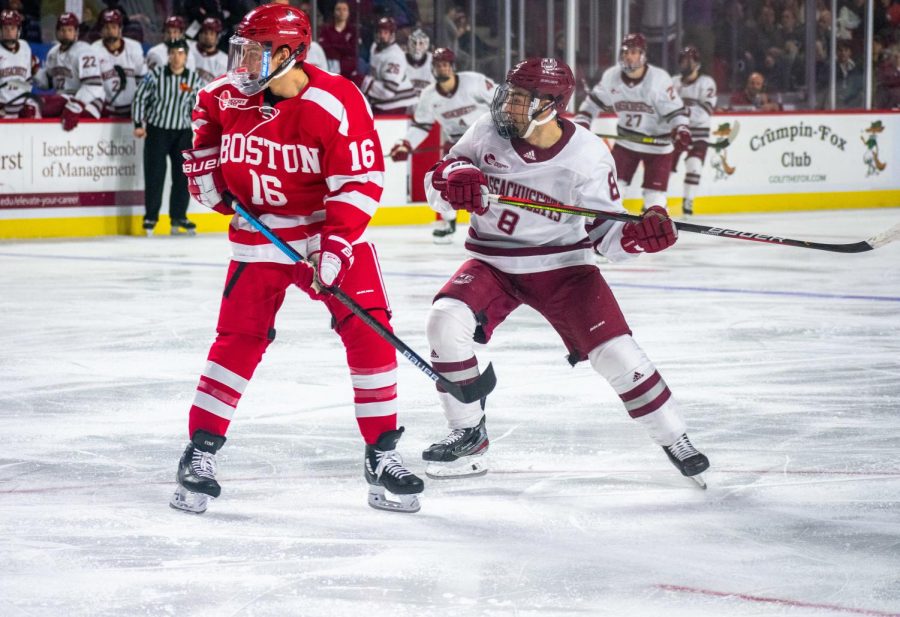 Physicality was the theme in the Massachusetts hockey team’s series against Boston University, with Saturday’s contest showing consistent battles, however it was the Terriers (4-7-1, 3-4-1 Hockey East) who came away with the win after a goal by Case McCarthy in overtime.

“BU owned the first period,” head coach Greg Carvel said. “We found a way to take the lead, but unfortunate overtime. I thought we gave up possession of the puck too easily in the zone there and gave them too much space.”

Senior captain Bobby Trivigno was a leading force for the Minutemen (6-3-1, 4-1-1 HEA), providing a spark after the initial three minutes where the Terriers dominated play. He registered the first shot for UMass and followed it up with a second that bounced off the pads of Drew Commesso. Trivigno’s work on defense was unmatched, limiting BU opportunities during the power kill and fighting his way back to block shots and knock the puck away.

The equalizer came from Trivigno with less than a minute remaining in the second period after Terriers Jamie Armstrong was sent to the box for tripping, tying the game at two goals apiece.

Five minutes into the third period, Ryan Ufko provided UMass with its first lead of the night in the third period off an assist from Trivigno. The Minutemen’s lead didn’t last long with Ty Gallagher tying it up for BU only a minute later.

“He’s a spark plug, and he finds ways to win battles,” Carvel said when asked about Trivigno’s contributions on the ice. “He’s our most important player and continues to be.”

The first period saw possession and opportunities controlled by BU, with the Terriers ending the first 20 minutes with 12 shots on net, one of which provided them with the lead. Jay O’Brien took a shot, with a fellow teammate screening Murray and finding the top left corner.

“Our compete wasn’t there in the first,” Trivigno said. “When you start a game like that and give them some life and take some tough penalties in the second, you are going to be chasing the game a lot.”

Matthew Kessel was sent to the box for tripping in the second period, with BU getting its second point of the night on the powerplay with a goal from Wilmer Skoog, assisted by O’Brien. However, it was Kessel that narrowed the deficit less than two minutes later giving the Minutemen their first goal of the night.

Making his return to the ice Friday night after being sidelined with an injury, Bohlinger moved up the line, skating alongside Morrow. However, more injuries plagued the Minutemen after Eric Faith was seen leaving the ice and did not return. Josh Lopina is expected to be out long-term, with fellow forward Cal Kiefiuk seen leaving the game Friday and left off Saturday’s lineup.

“The guys who usually don’t put the puck in the net, are definitely going to have to contribute offensively,” Trivigno said. “It’s a team game and we’ve never relied on one person to score so injuries are part of the game, and we just need some more guys to step up and be willing to take the opportunity in front of them.”

Matt Baker slotted in with the first line following the injury, however as the game continued Lucas Mercuri was seen also getting time alongside Trivigno and Garret Wait.

“Every team we play, they are going to give us the best,” Trivigno said. “We just have to be ready to play.”

UMass returns to the Mullins Center on Friday, Nov. 19 for a 7 p.m. puck drop against University of New Hampshire.