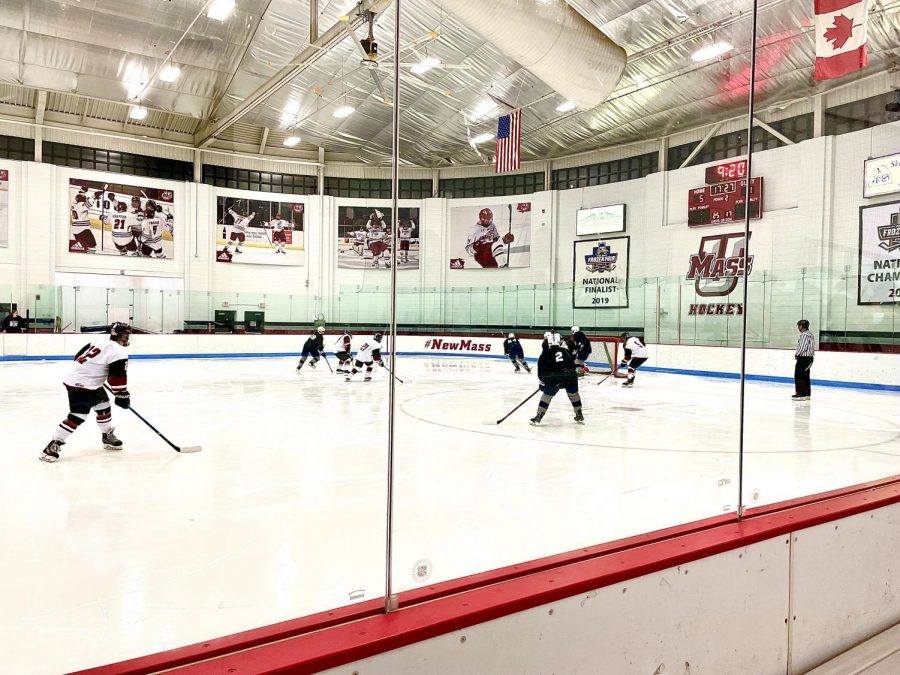 The Massachusetts women’s hockey team went 2-0 on the weekend against Penn State, crushing the Nittany Lions 7-0 in its first game Friday and ending the weekend with a 1-0 win on Saturday morning.

“Right now, we are strong in [the net], we have good goaltending and a lot of experience,” Wright said. “Those are probably our two biggest things right now.”

Both were factors held true, senior captain Holly Russell lead the charge with strong possession of the puck among others – with UMass in the offensive zone for the better half of the first. This production led to a saucer pass from Olivia Jordan on the powerplay, to Russell to find forward, Katerina Nikolopoulos at the net for the first Minutewomen goal with just under nine minutes remaining in the first quarter.

This spark led way for three more goals before the end of the period, from Ragan Paterson, Maya Borden and Nikki Herz who all had big games structuring plays and getting to the back of the net.

The second period proved more of a puck battle, 12 of the ultimately 20 shots UMass starting goaltender Casey Marshall saved on the night coming over the course of that frame.

“The team did a great job defensively,” Marshall said. “Lifting sticks, and not letting them come inside the box in the middle of the ice.”

The night came with four penalties for the Minutewomen, one of which a hooking call on Rachel Difraia during the second. Nonetheless, the penalty kill for the team was strong– the one-man advantage for Penn State during these situations still resulting in a scoreless game for the visiting team.

“We just need to keep the pedal down and not let up,” Wright said of his discontent with his team’s performance during that stretch. “Our second period needs work, it’s not strong for us. It’s a long change and we need to shorten our shifts.”

With two minutes left in the second period, Nicole Maimonis found the spark, lighting the lamp to add a fifth goal for UMass off of a pass from Regan Paterson.

The Minutewomen continued their strong play throughout the third period. Katherine Paradis kept the scoring going for UMass early in the final period. Paradis caught a pass from Maya Borden and skated around a defender creating separation for herself as she drove towards the front of the net and roofed a shot into the top corner to give the Minutewomen a six-goal lead.

“[Borden] kept saying, ‘Drive, drive drive’ and no one was coming to me, so she yelled, ‘shoot’ so I got it around the corner,” Paradis said.

Another late goal in the third from UMass put the final dagger in the Nittany Lions. Patterson sent a pass across to Marissa Gregory who buried the puck in the back of the net, making it 7-0 as Minutewomen were in full control.

“I thought it was a good momentum to have a good game like that, winning 7-0,” Russell said. “Going into a tough next two weekends, that was really helpful for our team to get some goals under our feet.”

The Saturday morning contest between UMass and Penn State was much closer than the night before. The Minutewomen won with the narrowest of margins– defeating the Nittany Lions 1-0.

“From both sides, I think they played a little bit better … I thought that we worked hard but just didn’t execute like we did [Friday],” Wright said.

The lone goal came in the beginning of the second period, coming from the stick of Brianna O’Neill, assisted by Russell and Nikolopoulos. It was a defensive battle with Minutewomen goalie, Mary Honan stopping all 15 shots that came her way.

Despite being in the beginning stages of the season, Wright expressed his high hopes for this group – one that parallels expectations for long-awaited consistent coverage on the women’s side of the game.

“It’s early to tell yet, but we got a good nucleus so we are expecting big things… we should make Nationals and we will see what happens then,” Wright said.

Carson Depp can be reached at [email protected] and followed on Twitter @carsondepp.

Johnny Depin can be reached at [email protected] and followed on Twitter @jdepin101.

Shanti Furtado can be reached at [email protected] and followed on Twitter @shantifurtado.