Defense is emphasized in practice for UMass leading up to Harvard 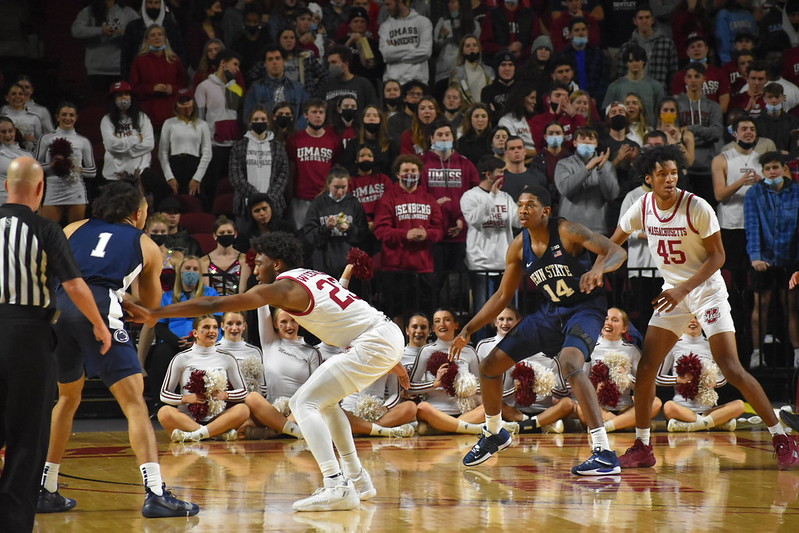 For the first time this season, the Massachusetts basketball team won back-to-back games, and even that feat took until the last shot of the game against Rutgers. Defensive consistency has handicapped UMass (5-3) from putting a collection of wins together early in the season.

“We’ve got to be better defensively, that’s the bottom line,” Minutemen coach Matt McCall said. “Our offensive numbers are through the roof right now… but defensively we’ve been pretty bad.”

A given night likely presents one of two defensive problems: poor perimeter defense or a lack of interior presence.

Despite the win, UMass was outscored 50-12 in the paint by Rutgers. It also had a world of trouble guarding the deep ball in Florida at the Jersey Mike’s Classic against its three opponents, allowing them to shoot a combined 51.8 percent. Yale was able to accomplish both, outscoring the Minutemen 42-16 in the paint while also shooting 9-of-21 (43 percent) from three.

“When you watch us play defense, there’s such a lack of aggressiveness,” McCall said. “The ball is just able to be hopped and moved around the perimeter and there’s no tenacity… We need to increase our tenacity and effort on defense and try to take teams out of things.”

An adjustment has been made in practice, as Noah Fernandes told media that McCall is emphasizing defense “three times, four times” more than offense in practice. This is the longest stretch UMass has had to rest in between games this season, giving the team almost a week to recover and try to fix its defensive struggles.

“Watching the film, we’re pretty locked in on the defensive end,” Fernandes said. “Our first effort will be good and another guy will help another teammate and after that the third and the fourth effort is where we’re messing up, later in the shot clock and stuff like that… We come in here, we guard the team’s actions, we’re prepared the coaches get us ready.”

“So we sort of know all that stuff when we’re in the game. It’s after that, the extra efforts is just what we need to make. And sometimes it happens, us messing up communicating, stuff like that. So we just go to do a better job communicating stuff like that when it gets late in the shot clock after that initial action.”

UMass is hosting Harvard Saturday at noon. The Crimson (5-3) are a team without a true center, but also a team that presents length at the guard position. Of the four guards who average over 20 minutes per game for Harvard, three are listed at 6-foot-6 or taller and the fourth is 6-foot-4.

Noah Kirkwood is the lead guard for the Crimson, averaging 16.4 points, 5.1 boards 2.8 assists and 2.8 steals per contest this season. The 6-foot-7 senior has scored in double figures in all eight games this season and shoots 90 percent from the free throw line this season.

The leading scorer for Harvard is forward Chris Ledlum, who averages 16.6 points, 9.6 rebounds and 2.1 steals. Ledlum has three-straight games with a double-double.

This will be a test to see if the Minutemen have improved in their ability to defend 3-pointers. The Crimson average 9.7 made threes a game and shoot the deep ball at 36.9 percent, both are top-70 marks in the country.

The game will be played at the Mullins Center and streamed on NESN.