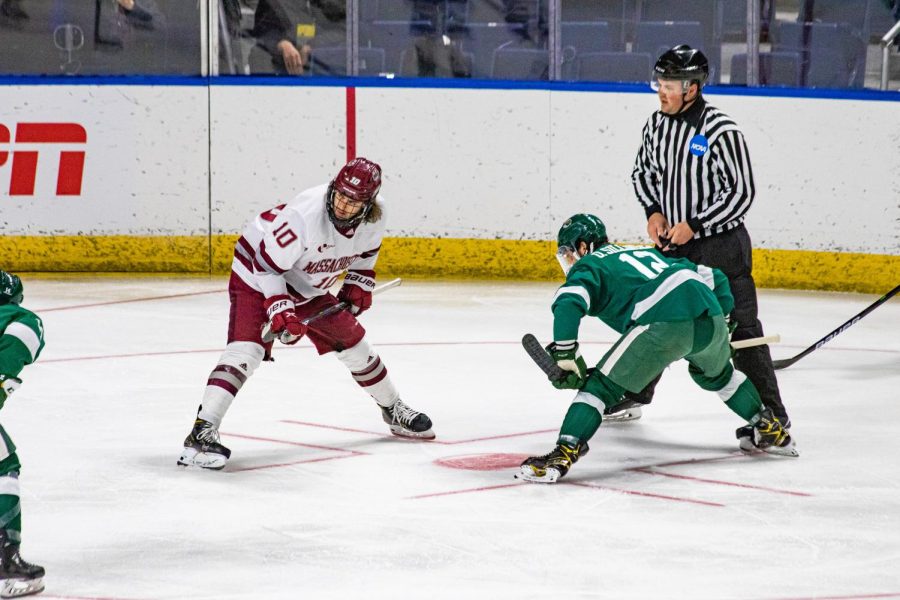 Updated Dec. 30 2021: UMass hockey’s series against Union originally set for Dec. 31 and Jan. 1 has been postponed.

The Massachusetts hockey team has massive amounts of potential in the 2021-22 season. Arguably even more than it had at this point last year. But potential only gets you so far in college hockey, and with big names returning to the lineup, it’s time for No. 12 UMass (9-4-2, 7-2-2 Hockey East) to hit its stride and start dominating teams the way it did down the stretch last year.

The point streak that the Minutemen gathered over the first half of the season is impressive. Any team whose last regulation loss came at the beginning of October must be doing something right, and UMass certainly has done a lot right. Even with a patch-work lineup with top forwards missing and a defenseman taking on a third line winger role, the Minutemen still have an active 13-game point streak.

But taking a closer look at UMass’ season game by game paints a much more underwhelming picture than what would be expected of a team riding such a streak. The Minutemen failed to beat Boston University in a pair of games against it, one ended in a shootout and the other an overtime loss. UMass also lost in overtime to New Hampshire, and all three games it played against Merrimack were wins, but only decided by one goal, with two of the three extending past regulation.

It’s safe to say that those performances aren’t indicative of a defending national champion squad. BU isn’t having a great year so far and it isn’t likely that either UNH or Merrimack will be ranked inside the top-20 at any point this season. The Minutemen have struggled to live up to their sky-high expectations so far, and head coach Greg Carvel showed some frustration with the team’s play going into the holiday break, even after picking up another overtime win.

The good news for UMass is that despite all that, it is still riding a lot of momentum, and its refusal to lose has never been more apparent. And now that Josh Lopina, Garrett Wait and Oliver MacDonald are returning – joining Eric Faith and Cal Kiefiuk who made their way back into the lineup a few games before the break – the Minutemen have one of the deepest lineups they ever have.

Ryan Lautenbach and Lucas Mercuri both played big time minutes on the top line for UMass, and they will be even more lethal when moved down to the bottom-6 forward group. The top line of Lopina, Wait and Bobby Trivigno, the Minutemen’s most dominant offensive line last season, will take the ice again as a trio. Kiefiuk, Anthony Del Gaizo and Reed Lebster have proven to be a solid second line. And now MacDonald, Lautenbach, Faith, Mercuri, Cam Donaldson and Matt Baker will likely fill out the third and fourth lines, with Taylor Makar, Ryan Sullivan and Jerry Harding all vying for those spots as well.

In the span of 23 days, UMass has gone from possibly needing to play multiple defensemen at forward to having an entire extra line of formidable skaters at its disposal, and that depth is vital, especially given the uncertainty surrounding COVID-19 and what affect it may have on the college hockey season.

Add on the seven strong Minutemen defenders and Matt Murray anchoring the net, and UMass becomes a very dangerous team capable of making another long postseason run. But in order to do that, the Minutemen have to start getting in games with this lineup. Lopina in particular hasn’t taken shifts in a game in two months, and he’ll need to get up to speed.

That’s what makes UMass’ series against Union so important. The Minutemen have a tough schedule upcoming, including a looming matchup against No. 3 ranked powerhouse Michigan. But that schedule begins with a series UMass has historically dominated, and two games against the Dutchmen (5-9-3, 3-4-1 ECAC) should be a perfect opportunity to pick up a pair of confidence-boosting wins and get the legs back under every skater returning to the lineup from their respective injuries.

The Minutemen played well, but not up to their standard during the first half of the season. Now is the time for them to return to their brand of hockey and build momentum towards the HEA and NCAA tournaments. The outcomes of their next few games will prove how much potential UMass really has this year.