The importance of ‘Scream’ 25 years later 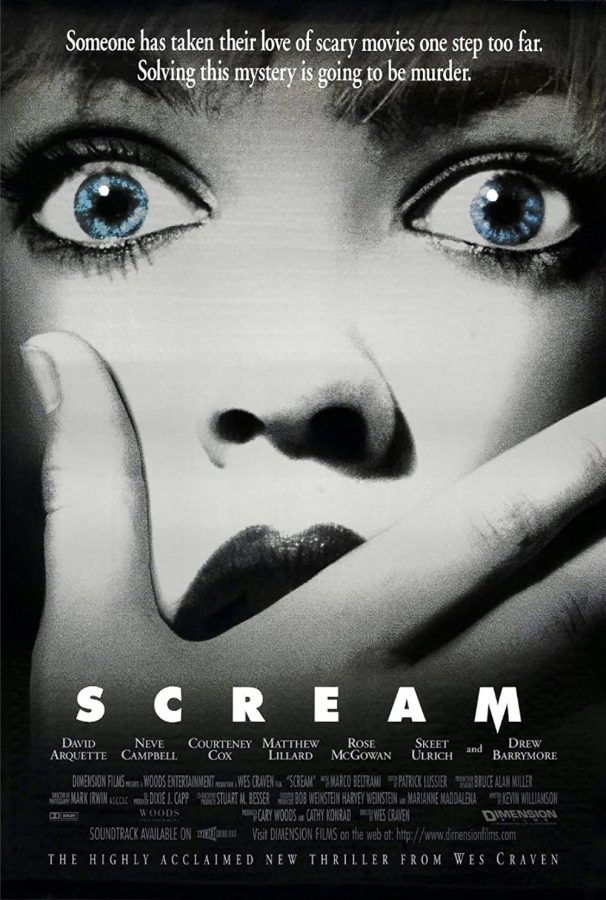 The 1990s were not stellar in terms of filmmaking. This was true for all genres of cinema, yet one genre suffered the most of all: horror. Horror movies of this era were grossing extremely low numbers, as the lack of original productions drew people away from theaters. The genre relied solely on what was produced prior, with campy sequels and franchises releasing left and right. Audiences weren’t excited to go to the movies anymore, and horror movies needed to be revitalized and brought back to life. Enter Wes Craven, American film director and mastermind behind the 1977 production “The Hills Have Eyes.” The film solidified Craven as a horror director, and he only continued to prove worthy of this title with other notable works, such as the “A Nightmare on Elm Street” franchise. Twelve years later, Craven directed a film that would blend the horror and comedy genre together, creating a film experience so unique that it was immediately deemed a classic.

Released in 1996, “Scream” is a typical slasher film, even drawing comparisons to John Carpenter’s “Halloween.” Its plot is fairly simple, centered around a teenage girl named Sidney and her friends in the fictional town of Woodsboro. The film opens with a gruesome scene involving the murder of two Woodsboro high schoolers, and sooner rather than later, their killer – a masked man dubbed “Ghostface” – is after Sidney and her friends, as well. The film employs a basic storyline, with even more surface-level characters, yet it does so in an almost-perfect way. The success of this film gave way to three sequels, with one releasing the year after the first film, and a spin-off TV show. There was something extremely appealing about characters that were easy to relate to, and audiences wanted more – even if the story was overdone and unoriginal.

Looking past everything this film has to offer in terms of plotlines and underdeveloped characters, the entirety of “Scream” plays like a satire. The film pokes fun at the very genre it changed forever. It’s extremely self-aware and employs overplayed tropes, coming to life once again. Sidney, the final girl, is coincidentally a virgin. This idea is seen in several other horror movies, signifying that only the “pure” characters stand a chance at survival. Furthermore, her friend, Randy, adds to the self-awareness this film possesses. During a scene at Stu’s house party, Randy is seen teaching his friends what to do and not to do when a killer strikes. His sudden analysis (of the film that the characters are watching) is perfectly timed, as things start to go awry shortly after Stu’s party clears out.

Many of the characters throughout this film fit into tropes we know and sometimes love, but the character that stands out the most is the killer. At the end of it all, the audience comes to find out that “Ghostface” is not a scary, big, burly killer, but instead, he’s just the product of two silly teenagers who were heavily inspired by horror movies. He dresses up in a mask and a cheap cloak that can be found at a dollar store, thus appearing as an intimidating figure. In reality, “Scream” is quite a comedic movie, as it balances satire with well-placed references to prior slasher films. However, instead of placing too much focus on its comedic elements, such as films like “Shaun of the Dead,” it homes in on being a scary film with some witty elements. This style is still seen today, with films such as “Ready or Not” and “Happy Death Day.”

However, many argue that the post-“Scream” era is just as bad as the pre-“Scream” era. Early 2000s horror movies were just as bad, if not worse. Films such as “Final Destination” and “Paranormal Activity” dominated movie theaters, along with the occasional cheap teen slasher film. So, was “Scream” really that different if it didn’t change anything? It didn’t change the world of cinema forever, but it did do one thing: it made audiences excited about horror movies again. Even though horrible movies followed its release, it brought a breath of fresh air to the genre once more. Its real success lies in how it influenced horror films for the better, especially satirical ones. Most importantly, it grabbed the attention of audiences everywhere, sparking excitement for a genre that was beaten to death before this film. If this movie were never made, we might not have seen some of the best recent horror films of our time.

Ashviny Kaur can be reached at [email protected]