Back-to-back losses for the Minutemen 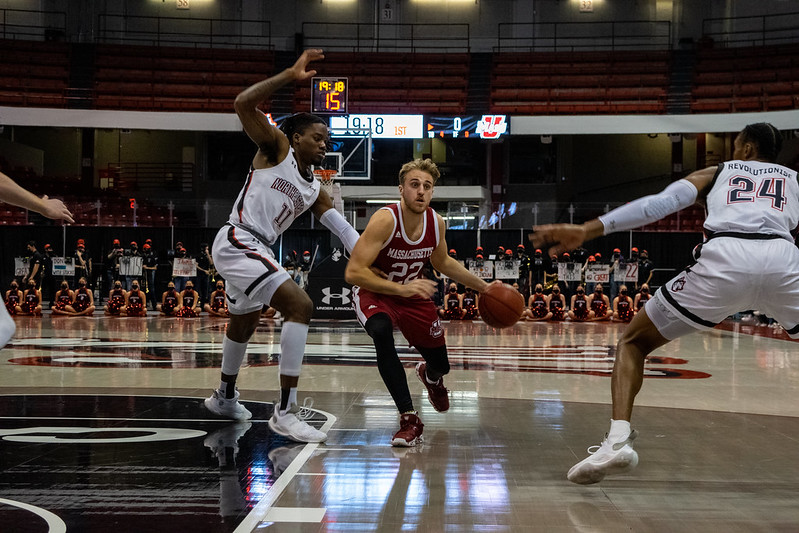 The Massachusetts men’s basketball team fell to North Texas 66-57 Saturday night in a neutral site game that was a part of the Hall of Fame Classic. The team crawled back from an 18-point deficit but in the end the Mean Green’s stout defense was too much to handle for the Minutemen.

UMass (6-5) showed encouraging signs on defense, especially in the second half with its press, but North Texas (5-3) limited the Minutemen to 25 points less than their average per game.

“I’m pleased with our defense, but I thought our effort from certain guys in the first wasn’t where it needed to be,” UMass head coach Matt McCall said. “We need to be better. We get off to good starts and we sub [players], and all of a sudden our seven or five-point lead is relinquished and we’re down eight in a short amount of time, I think we have to be better in those situations.”

Noah Fernandes and C.J. Kelly led a balanced scoring game for the Minutemen offense with 13 points each, followed by Greg Jones with 12 and Rich Kelly with 10 points. Fernandes led all players with an eight-assist performance, and Jones led all players in rebounds with eight.

Forwards Trent Buttrick and Michael Steadman along with guard T.J. Weeks, combined for just two points and 32 minutes totaled amongst the three. Steadman only got to see step on the hardwood for five minutes, recording no scoring but picked up one personal foul.

“Obviously [Michael] Steadman has been battling, trying to get out there fully healthy,” McCall said. “When he brings in that energy and that effort, almost the same level of intensity that Greg [Jones] brings, he changes our team, and we need to continue to challenge him to do that.”

North Texas found success attacking the paint from the get-go and were able to get any look they wanted under the basket, especially through pick-and-roll actions. Forward Abou Ousmane and guard Rubin Jones looked unstoppable at times, leading the Mean Green in points with 13 each.

Ousmane was a force down low for North Texas while and R. Jones went 3-for-5 from three. Thomas Bell, whom McCall praised before the game, was mostly handled by UMass’ G. Jones, but still had a solid outing and finished with 11 points, five rebounds and four assists. Bell picked up his fourth foul early in the second half and didn’t do as much damage as the Mean Green are used to seeing from him.

Coming into the game, pace of play was one of the biggest factors that would determine the outcome, and North Texas was able to establish its game, forcing UMass to play on its terms for much of the contest. There was a total of just 10 fast break points in the entire game.

“[North Texas] controlled the pace, no question about it,” McCall said. “When we wanted to play a little bit faster, we started to press … and we were kind of able to chip away and cut back into it to where I think we had the ball down five and we turned it over on back-to-back possessions. …They were able to get that lead because they dictated the pace.”

When UMass was able to break that barrier and speed the game up, that’s when it cut the deficit and brought the game within reach, but erratic shooting and careless turnovers negated its chance of taking any sort of lead since the 15:33 mark in the first half.

“[North Texas] sped us up a little bit, but they just were tougher to start the game off,” G. Jones said. “We got together in the second half, but we can start in a hole coming against good defensive teams that can also score the ball well, so we’ve just got to be better on defense.”

Next, the Minutemen will begin a stretch of three home games, two final non-conference games before it gears up for the start of conference play.

“We’re going to focus on finding the eight or nine guys that are going to make us better,” McCall said. “We’ve got to find the right combinations going forward, and again, holding the guys to that standard of playing with that energy and that effort.”

UMass next takes on Fairfield at home on December 19th. Tip-off is set for 1 p.m.

Pedro Gray Soares can be reached at [email protected] and followed on Twitter @P_GraySoares.