The film is decent, yet not a must see 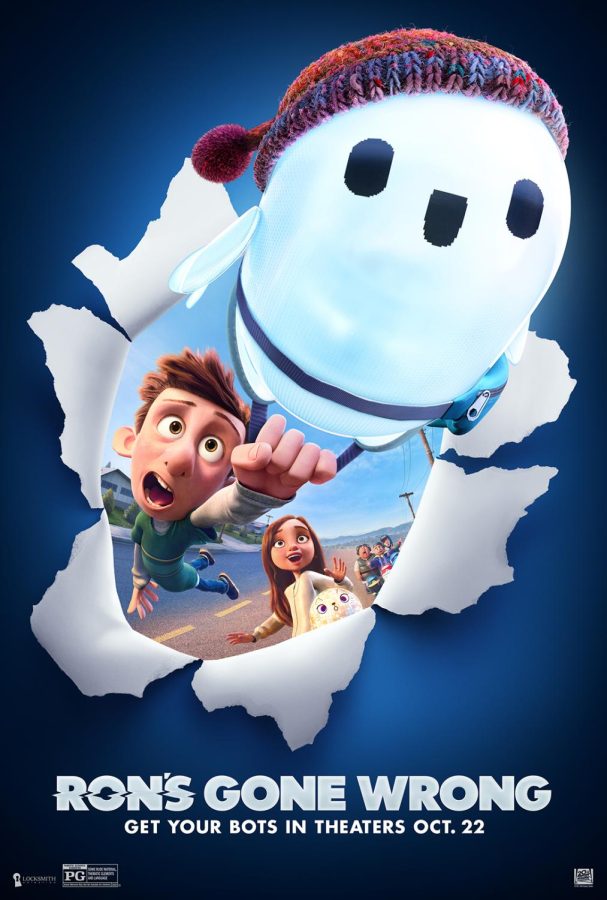 “Ron’s Gone Wrong” was released in theaters in 2021 and is now available for streaming on HBO, HBO Max and Disney +. It is a 3D computer animated film about technology – specifically examining how social media and technology affect teens. The animation houses solid 3D animation, yet is nothing I felt wowed by. Directing credits are given to Sarah Smith and Jean-Phillippe Vine, with Octavio E. Rodriquez having co-directed the film.

The film begins with a tech company named Bubble, clearly modeled off companies such as Apple and Facebook. They announce their new product: a little robot named the B*Bot that can connect you with others as well as the internet. It serves as essentially a more advanced iPhone that can move by itself. The B*Bots are very popular in the film and it appears as though every kid has them.

The film then moves on to a child named Barney (voiced by Jack Dylan Grazer.) Barney lives with his father and grandmother in a suburb. The dad tries to sell different trinkets over calls and serves as yet another common animation trope of chucklesome dads. The grandmother’s personality seems to be enveloped in the facts that she is from the Soviet Union and likes to cook.

When Barney goes to his middle school, he feels as though everybody has a B*Bot except for himself. This leads to Barney feeling isolated, which the adults make even worse by making Barney sit alone at a bench to get people to come to him. That same day is Barney’s birthday, he goes home to a party his grandmother organized for him, yet he has no friends to bring. He hopes to get a B*Bot for his birthday yet does not receive one. His family realizes his social life is suffering without a B*Bot, so they venture to the store to purchase one for him. Unfortunately, the store is sold out of B*Bots and they are only available for preorder. The family ends up buying him a damaged one off the street.

Barney is excited to get the present, but the B*Bot is defective. Barney later calls the robot Ron (voiced by Zach Galifianakis.) The film makes good use of Ron’s defects for comedy about the frustrations that come with dealing with technology. The robot does not work properly and does not have safety features installed. One day, it beats up a group of bullies who are mocking Barney, this leads the Bubble corporation to go after the defective robot. The company does not want its public reputation to be damaged by footage of the robot harming people . The programmer behind the B*Bots also wants to capture the robot to understand it.

The children, and most of the film’s characters are essentially just stereotypes with little complexity: the wimp with no friends, the self-obsessed social media star, the bully with a backwards hat…etc. Additionally, the main character seems to have no interests of his own or anything substantial to him. He used to like rocks when he was younger and characters joke about that, yet he does not seem to have any current passions. It is not that his passions have been sucked away by a depressing middle school environment or his loneliness, there just seems to be nothing there.

The film’s commentary on social media is probably nothing you have not heard before. Social media and technology are obviously a matter of large social debate -the film does not feel like it is adding much to that debate. However, there are some good laughs the film gives on the motivations behind tech companies and the abuse done by tech companies – including jokes about how tech companies invade people’s privacy. There is also a humorous bit where Barney’s dad talks about kids being too focused on technology – then, proceeds to check his phone.

The ending feels very unsatisfactory considering the ideas the film is attempting to unravel. The ending, presented as happy, does not really solve the issues of technology and social media for anybody except a few kids at one middle school. Not much has really changed either by the end of the film, and the changes that do happen don’t fix any of the central issues with social media and the internet. Perhaps it would be arrogant for the film to propose a solution to society’s trouble with social media, however, the ending feels too optimistic and not ambivalent enough.

The film is decent. The story is generally competent, though the characters lack depth. It does however receive points for being willing to tackle relevant social issues. Despite its flaws, I never found myself bored or appalled by anything. I have seen worse animated films, there are laughs and it is fairly entertaining.

Scott Lerer can be reached at [email protected]