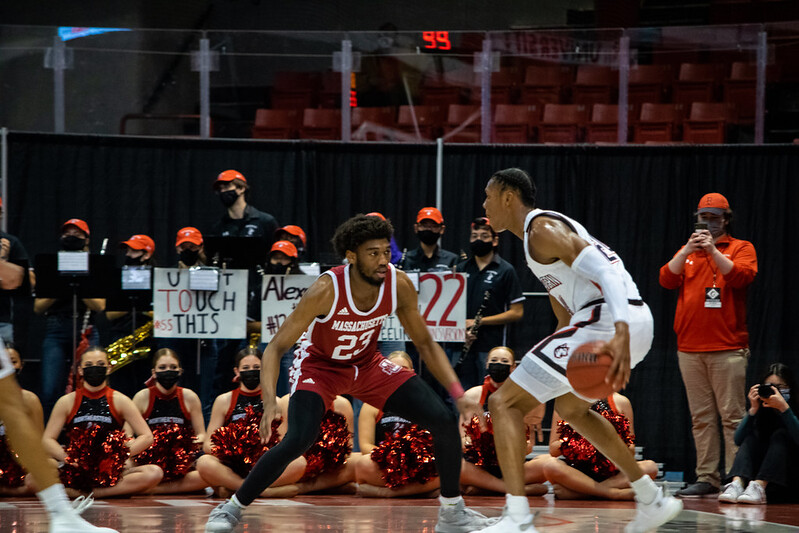 The Massachusetts men’s basketball team started off hot and built an early double-digit advantage but couldn’t hold onto it as Duquesne adjusted and went into the half with a lead, which it never lost.

The Minutemen were able to make it a one-point game in the final two minutes; however, the Dukes shut down their comeback attempt with two clutch shots to hand UMass its first home loss of the season, 78-74.

“I thought [Duquesne’s] intensity, they raised their level and we didn’t really match that in the first half,” UMass coach Matt McCall said. “And then, you know, I thought defensively in the second half we got whipped off the bounce a bunch, they kept getting down the lane, give them credit, they made some difficult, tough shots.”

Minuteman (7-7, 0-2 Atlantic 10) big man Michael Steadman, who started his first game of the season, was the biggest reason behind his team’s hot start. Early on, Steadman knocked down a late shot clock midrange jumper, grabbed an offensive board in the following possession and put back the layup for the and-one, making the free throw afterwards. He scored nine of UMass’ first 14 points and had a block that forced an early timeout by the Dukes (6-7, 1-0 A-10).

C.J. Kelly led the way for UMass, scoring 19 points on 7-of-18 shooting. Rich Kelly followed him with 16 points and Noah Fernandes finished with 14 points, six rebounds and four assists after a two-point first half.

Steadman racked up 13 points, six rebounds and two blocks, and even though he had a quiet second half due to facing double-teams when he caught the ball in the post, his first half performance showed that he could be capable of holding a starting position.

“I just wanted to come out and be aggressive as possible, give my team the best chance to win, get early duck-ins and seals and try to score around the basket…,” Steadman said.

Duquesne freshman guards Jackie Johnson III and Primo Spears did most of the damage for the Dukes. Both had standout performances and finished with 27 and 21 points, respectively, combining for over half of their team’s points. To put the cherry on the cake, each of them hit a difficult clutch shot in the last minute of the game to seal the win.

Duquesne’s starting five consisted of three transfers and two freshmen, all in their first year for the team. Additionally, the Dukes hadn’t played a game in three weeks, so their offense was all over the place at the start with just two points in the first five minutes, but throughout the rest of the game they quickly adjusted.

Defensively, they began to push the Minutemen away from the basket, picking up opponent guards very high up the court and doing a great job of neutralizing the pick and roll by hedging. This defense helped Duquesne take their first lead in the game with a 15-2 run, erasing the 12-point lead UMass once held.

While they’ve been able to come back from large deficits throughout the season, the Minutemen offense has also struggled to hold on to leads, and it showed once again due to  Duquesne’s suffocating defense. But once again the defense of UMass proved to be a bigger issue.

“I think one of the biggest mistakes I made in the game was that, and we probably needed it when we started getting hurt so bad off the bounce in the second half, we probably needed to look to go zone more,” McCall said. “… I’m kicking myself right now, I wish we would’ve played zone on that last possession just to give them a different look and catch them by surprise…”

The Minutemen also continued to have some turnover problems, which killed their momentum and contributed to them both losing leads and struggling to cut deficits. UMass had 17 turnovers compared to Duquesne’s nine and finished with more turnovers than assists (14).

Foul trouble for UMass guards was also an issue. Fernandes and Rich Kelly continued to suffer from it, both finishing the game with four fouls on their tab. But, even in foul trouble, Fernandes was one of the biggest reasons the Minutemen were able to make it a one-point game in the final two minutes.

“No game’s guaranteed. You got to go out there and play, and hats off to Duquesne, but just got to learn from it. That’s all you can really do,” C.J. Kelly said. “Of course, McCall is a mastermind so he’s going to come in [and help]. After every game I think we’ve always gotten better at something. So, he’s going to make a good adjustment.”

UMass will travel to Davidson on Tuesday for its next conference matchup. Tip-off is set for 7pm.