Minutemen have more depth than ever after getting back injured players 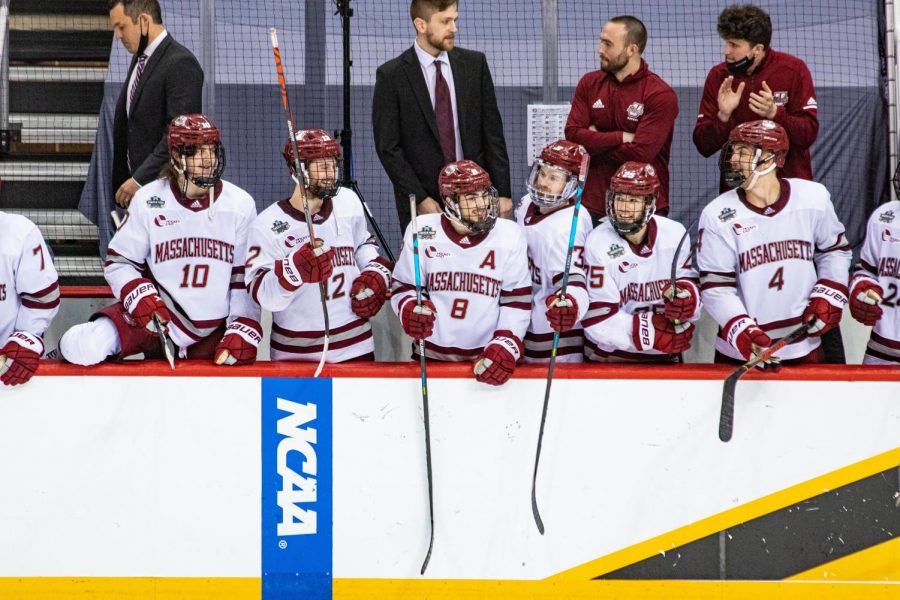 With COVID-19 derailing sports at every level across the country, we’re heading into blurry lines as far as the Massachusetts hockey team’s schedule is concerned. After having its series against Union postponed, No. 12 UMass (9-4-2, 7-2-2 Hockey East) is instead gearing up for a non-conference matchup against Merrimack on Monday at 6 p.m.

When the Minutemen do take the ice again, they will have a much different lineup than the one that suited up against the Warriors (6-9-1, 3-7-0 HEA) before the holiday break. There are likely many changes coming, and I tried to make some sense of all the moving parts and predict what I think UMass’ lineup could look like on Monday.

Pretty obvious choice here, This has been the Minutemen’s top offensive line since the trio was put together last season. Trivigno and Wait have a great connection spanning back to their days in the USHL, and that was on display in the Frozen Four last season when the pair connected on a game winning goal to send UMass to the national championship game.

Lopina is the perfect center for that line; he has size, skill, is good in the faceoff circle and a true offensive threat — especially on the power play — and he is a capable player in the defensive zone as well. Having those three back together as the top even strength line and first power play unit should provide a significant boost to the Minutemen’s overall offensive production.

Another relatively easy choice here with the same logic as before: Kiefiuk and Lebster know each other very well, they’ve been skating together since they were freshmen, and I don’t expect that to change anytime soon. And just like Lopina was the perfect top-line center, Del Gaizo is perfectly suited between Kiefiuk and Lebster on the second line. He brings toughness to the line and as of late has come alive in the offensive zone. If Del Gaizo keeps rolling the way he has this line could score a lot of goals down the stretch.

Now we get into some interesting combinations. I firmly believe that Donaldson, Faith and Lautenbach are all third-line players right now, so I followed my gut and made them a trio. Donaldson has shown flashes since transferring to UMass and he should get better and better as the year goes on. He had an entire year away from college hockey but has a lot of potential and should excel in this role.

Faith is a talented center who could easily be on the second line had Del Gaizo not come alive in his absence. Given his ability to win faceoffs at a high percentage, he should be able to anchor this line and get it some good looks in the offensive zone. Meanwhile Lautenbach can create opportunities with his legs. He is the fastest skater on this Minutemen squad and uses that to his advantage on the breakout. Lautenbach has also shown a lot of potential as a goal scorer and taking on third line players should be a major advantage for him considering he lined up on the top line for a few games during the first half of the season.

Mercuri’s solid performance on the first line before the break should easily earn him a spot anchoring the fourth line now with players back from injury. He’s another big, physical center who can establish a presence in front of opposing goaltenders and use that to create scoring chances. Baker has been relatively quiet so far this year, but like Donaldson, I expect him to find a groove soon and make some noise on the fourth line.

MacDonald was tough to pin down because he wasn’t a staple in the lineup for very long before his injury but seemed to gain some confidence during his last few games. I could see him re-establishing a spot in the lineup right away, but I wouldn’t be surprised if Ryan Sullivan slots into this spot instead. This was my toughest pick to make but based on his play prior to injury I’ve got MacDonald here for now. Keep in mind the fourth line will never be completely set in stone, as forwards like Sullivan, Jerry Harding and Taylor Makar will compete in practice for a spot in the lineup as well.

Kessel hasn’t had as much success in his third year as he did in his first two seasons at UMass, but he’s still a top-pair defenseman and at his best is probably the best offensive and defensive player the Minutemen have at the blue line. He and Ufko make for a great duo, and I don’t expect that pair to change anytime soon, although Scott Morrow has a lot of chemistry with Ufko as well.

And speaking of Morrow, this of course depends on if the freshman is able to play or not. He was a member of team USA in the World Junior tournament that was cancelled by the IIHF due to COVID-19 concerns. If Morrow does play Monday, I like his pairing with Bohlinger. These are two offensively capable defensemen who match each other’s play styles perfectly. Bohlinger has great vision and always makes the extra pass, and Morrow has quickly become UMass’ most lethal finisher at the blue line, if not across the entire lineup.

This is a tricky one because at their best Felix and Demin could be a shutdown pair together and they proved that against UNH, where they were easily the best two defenders on the ice. But last time out against Merrimack they underperformed, and UMass coach Greg Carvel was unhappy about their performance afterwards. I could see Ty Farmer taking one of these spots instead, but for now I’ll stick with this duo, as they have an incredibly high ceiling together.

Like I said, this was a tough call, and I wouldn’t at all be surprised if Farmer was in a defensive pairing in place of Demin or Felix, or even Bohlinger for that matter. I’ve got him listed as the extra skater because he’s already proven that if either a forward or defender goes down mid-game he can step into their place. Not only that but I think the pairings listed above mesh well together having gotten to know each other while Farmer was skating with the forwards, so this made the most sense to me.

And of course, Matt Murray will be in net for every game this season unless he is unable to play. Luke Pavicich’s time will come, but he certainly isn’t ready to step into a starting role yet.