UMass preparing for tough series against Michigan on the road 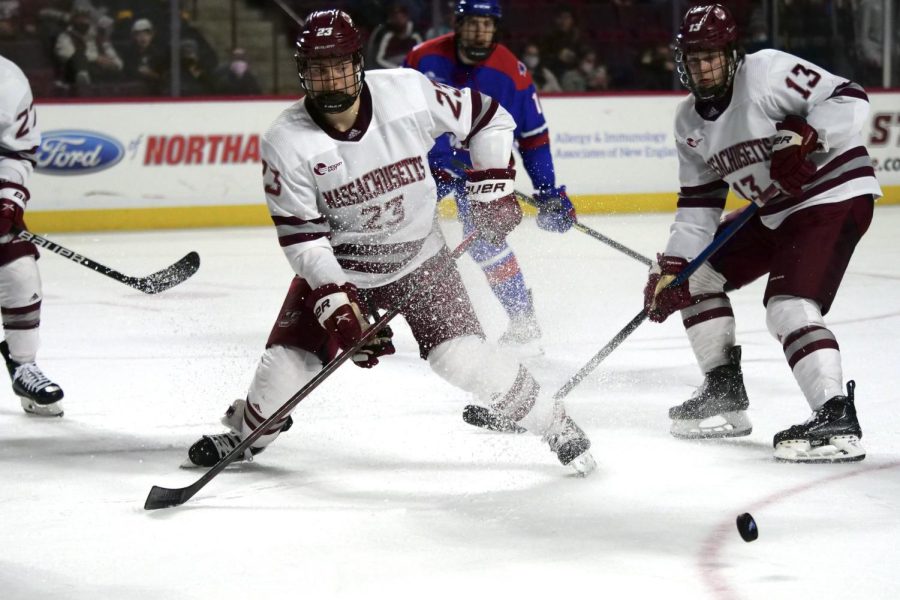 Coming off a successful win over Merrimack on Monday, the Massachusetts hockey team will travel to take on No. 3 Michigan in one of its toughest matchups of the season.

“This is game that a lot of people circled on their calendar before the season started,” head coach Greg Carvel said. “It’ll be good hockey. I’m sure they are excited, and we are excited.”

Carvel emphasized how well the team played against Merrimack and already sees growth in the program. In the first three matchups against the Warriors (7-10-1, 3-7-0 Hockey East), he believed he stole a few games from them, but on Monday he saw UMass as a stronger, more dominant team overall.

“We have a lot of new kids and a lot of injuries,” Carvel said. “Second half of the year, I think we’re going to be a really good hockey team. I think things are coming together.”

The Minutemen (10-4-2, 7-2-2 HEA) started the season with two losses, but Carvel believes that aids the program, with teams believing they are not as strong as last year. However, he thinks differently. This challenged UMass to get better, and he continues to see growth from the returning players along with the younger members.

“I’m at a point now where I don’t accept losing,” Carvel said. “I’ll never say, ‘oh that was one game’. Screw that. We finished last year 14 in a row without a loss. We had the two games against Minnesota State and now we’ve gone, I don’t know, 12 more games without a [regulation] loss. It’s pretty damn good and we’ve fought through a lot of adversity to get there.”

After a long holiday break, the Minutemen were set to face off against Union on Dec. 31 and Jan 1, but the surge in COVID-19 cases forced the series to be cancelled. Knowing that they were set to take on Michigan in early January, UMass looked to get one more game on the schedule, and the Warriors — who also had one of their games postponed — stepped up to the plate.

On Monday night, The Minutemen battled against Merrimack with multiple players returning from injury and the offense displaying greater cohesion. Josh Lopina, Garrett Wait, and Oliver McDonald were back in the lineup, but Anthony Del Gaizo and Eric Faith did not play.

Lopina put on a strong performance, winning 12 out of 20 faceoffs and taking a total of 10 shots on goal. While his time on the sidelines was tough, his return couldn’t come soon enough as he is aware of the challenge the Wolverines will face him with.

“Obviously they are a really high-end skill team,” Lopina said about Michigan. “We are going to try and outcompete them and use our culture to our advantage.”

During the break, Carvel challenged assistant captain Matthew Kessel, and the junior stepped up, with his skill and leadership on full display against the Warriors. He believes that Kessel is a top defenseman, playing physical as a key member of the power play and penalty kill units.

Despite there being moments of struggle present on defense, Kessel helped UMass remain in the lead and helped it earn a win heading into the series against Michigan.

“Two good hockey teams are going to play each other,” Carvel said. “This will be just another step on the ladder here. Playing a good team on the road. Hostile environment. It’ll be good experience for us, win or lose, it’ll make us a better team.”