UMass set for top-15 showdown against Northeastern on Friday

The Minutemen are coming off two losses against Michigan 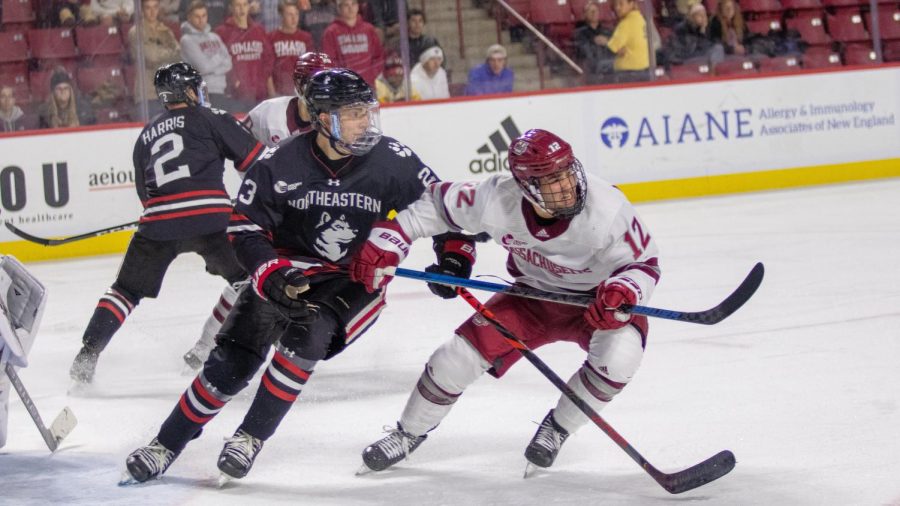 The Massachusetts hockey team will return to the Mullins Center and face off against  Northeastern in a series beginning Friday night. The Minutemen (10-6-2, 7-2-2 Hockey East) moved down in rankings to No. 14 following their series against Michigan.

“They’re at the top of the league right now with us and we’re looking at this as a playoff type of game,” head coach Greg Carvel said. “I’m expecting a very, very good weekend of hockey. Excited for our guys. Didn’t play last weekend and [we’re] pretty close to healthy again.”

Despite getting swept by Michigan, a positive for UMass was getting more game action for its players that recently returned to the lineup. It was important for forwards like Josh Lopina, Garrett Wait and Oliver MacDonald to get shifts under their belt after long layoffs. The Minutemen’s injury bug isn’t done quite done yet, but UMass is still preparing to suit up one of its deepest lineups of the season against Northeastern.

During the break, captain Bobby Trivigno, who has continued to shine and generate consistent scoring for the Minutemen, was nominated for the Hobey Baker award by coach Carvel. Trivigno has 18 points on the season, including an assist and a goal against the Wolverines.

“That’s a guy that makes an impact and so he was our nomination,” Carvel said. “You should know who your best players is, and Bobby has been that and continues to be, and I think he’s got a good chance to be in that top-10 group.”

Friday will be the first game for UMass in front of its home crowd at the Mullins Center in 18 days. However, Saturday’s game at Northeastern will be closed to spectators due to concerns with the surge in COVID-19 cases across the nation that have caused games to be cancelled and postponed. But after spending so much time on an empty campus during winter break, Friday night brings a lot of excitement for the Minutemen.

UMass has no easy task ahead of it when it gets back into game action against the Huskies. Northeastern is not only the top team in Hockey East but also has a well-rounded lineup that the Minutemen will have to play sound hockey against on Friday and Saturday.

“Their goaltender I think has the best stats in the league and that means he’s a good goalie, but it also means they’re playing good defense in front of him,” Carvel said. “My assistants feel that they [the Huskies] have one of the most talented forward groups in the league too. That’s a good combination, good forwards, good goaltending and good defense.”

UMass’ schedule picks up heading into the second half of the season, with no long breaks and four games in the next week. The remaining games are all within the conference except for a series against LIU beginning Feb 4.

Friday’s matchup against Northeastern will begin at 7 p.m. in the Mullins Center, before the Minutemen travel to Matthews Arena for a 7:30 p.m. game.