“[Wait] heats up at the end of the year” 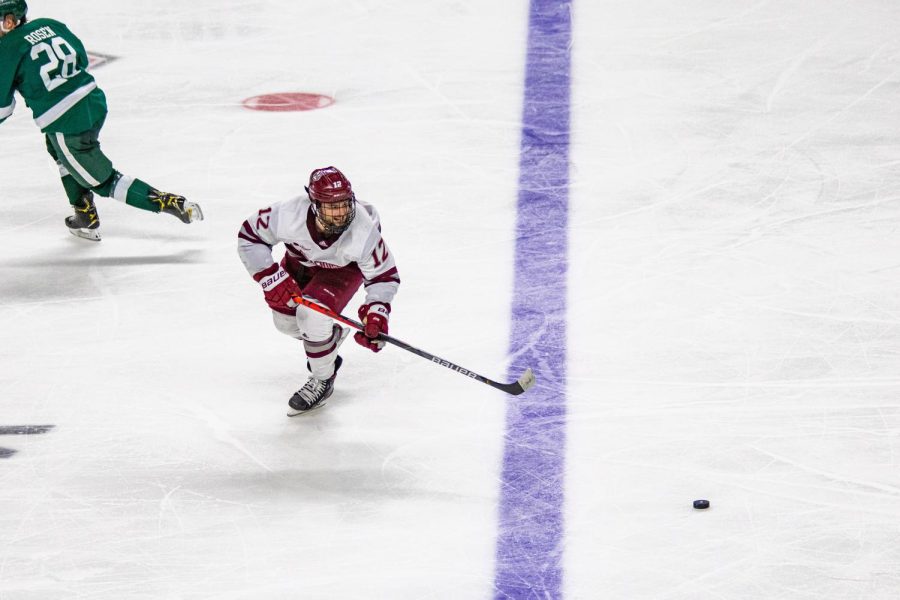 “The usual,” head coach Greg Carvel said when asked about Wait’s performance. “He’s around the net. Thought he could have been a little better with the puck.”

Despite a slow start for the Minutemen (15-9-2, 10-5-2 A-10), Wait remained a solid force on offense working to create opportunities and moving the puck forward. Halfway through the first period, Wait charged towards the net with only one defender standing in front of him, but with a wave of Black Bear (5-16-4, 3-12-2) players rushing back. While Trivigno was pushing forward with him, he was covered and Wait took a shot that soared out wide and off the boards but worked and got to the rebound. His success in the opening 20 minutes would continue.

When Maine’s Jakub Sirota was sent to the box for interference 11 minutes into the game, it only took Wait and the Minutemen five seconds before they found the equalizing goal on the power play. Josh Lopina won the faceoff backwards to the stick of Ryan Ufko. The freshman then found Wait skating by the side of the net who was able to tuck the puck away. That goal marked Wait’s fourth in the last three games.

In the second period, Sirota was sent back to the penalty box, giving UMass the advantage once again, but it was unable to capitalize. There were many quality chances during the two minutes, including a quick slap shot by Wait, but it went out wide and Maine was able to clear.

Wait is coming off a successful performance against LIU on Saturday, having scored two goals in the 3-1 win. That marked his third career game with two goals and his second goal was the third time he has scored a game winner. He currently sits in fourth place in points for the season at 15, with Ufko, who recorded the assist, sitting in front of him at 18. Fellow line-mate Bobby Trivigno leads the team with 31 points.

“I think [Josh Lopina] and [Trivigno] kind of carried me a little bit,” Wait said. “Those two definitely do a lot of the heavy lifting.”

The partnership between Wait and Trivigno was showcased on Friday. Late in the third period, with the score tied up at two, Wait sent the puck towards the goal, finding Trivigno stationed in front, but his shot was saved by Maine’s Victor Ostman.

Wait’s success at UMass began last season after transferring from Minnesota. He ended the season with nine goals and eight assists, including the game-winning goal in the Minutemen’s 3-2 victory over Minnesota Duluth in the NCAA National Semifinal. Having already recorded eight goals on the season and with more regular season and post season hockey left to play, Wait is on track to build on his point total from last season and surpass it. On Friday, he recorded five shots along with his goal.

“[Wait] heats up at the end of the year,” Carvel said. “Just like last year. He really came on and started to come on for us now.”

Before coming to UMass, Wait had a total of 10 points combined from his freshman and sophomore year, but since putting on the Minutemen jersey, he has more than doubled that number with 31 points over the course of the last two seasons.

Wait and the Minutemen will return to action on Saturday night to complete the series against Maine. Puck drop is set for 7 p.m.