The anxieties of war

War between Russia and Ukraine has begun. We have never seen anything like it in our lives. 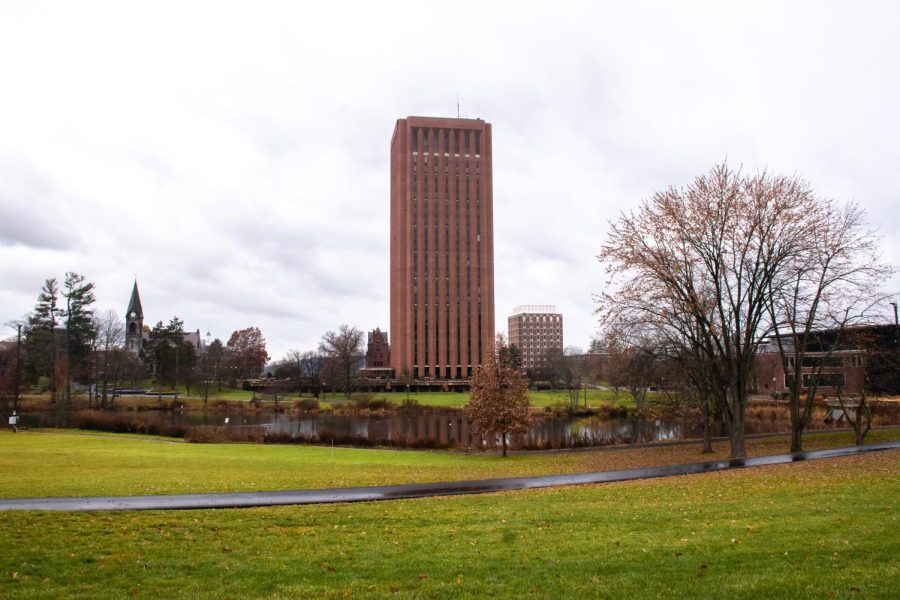 It all feels so surreal.

For the last month, the United States and its North Atlantic Treaty Organization (NATO) allies passionately and straightforwardly warned the world that Russia was planning an invasion of Ukraine. So much talk was made about battle positions, troops at the border, false flag operations, cyberattacks, 100,000, 150,000 and then almost 200,000 soldiers ready for war. The response was tepid; some questioned the authenticity of U.S. intelligence, especially after past blunders in Iraq and Afghanistan. Russia repeatedly denied the existence of any invasion plans. And many Ukrainians themselves felt that the reports of impending war were overblown.

Beyond this, my generation has never seen such a massive conflict. At most, some of us here at the University of Massachusetts were one or two years old when the 9/11 terrorist attacks unfolded, and the resulting War on Terror. Many of us were too young to recognize the gravity of the situation. The same applies to the Russo-Georgian War in 2008 and the Russian annexation of Crimea in 2014. A combination of factors can explain this naivety.

Living on a geographically isolated continent, far from the European conflicts that we learned about in our history books, as well as our lack of social media usage at our younger ages, are just some of the reasons why military conflicts in Europe are not top of mind.

So, when warned repeatedly that Russia was imminently invading Ukraine, it is not unbelievable that we would not consider it much. After all, we’re college students. We have our own responsibilities. Ukraine and Russia are so far away. Where is Ukraine even on a map? No one is invading the United States anyway. The idea that the two largest countries in Europe by area could be involved in the biggest military conflict in decades was not of paramount concern. After all, the last two weeks were filled with U.S. warnings of imminent invasion, only for an invasion to never begin. Maybe it wouldn’t even happen.

And then it did.

In the middle of the night in Ukraine, and during daytime in the U.S., Russia invaded Ukraine. Days prior, Russian president Vladimir Putin had signaled he would be sending in “peacekeeping” forces to the Donbas region of Ukraine; some felt this was the beginning of an invasion. How we were mistaken.

What occurred Wednesday night was unequivocally the start of a war. The warnings grew more dire throughout the day, as the U.S. Secretary of State Antony Blinken remarked that he believed war would begin before the day ended. And he was correct. Blasts were heard around Kyiv, Ukraine’s capital, among other cities across the country. The U.N. Security Council was frantically convening in an emergency meeting to discuss the crisis. As this was going on, Putin gave a speech announcing a “special military operation” was to begin in Ukraine; in layman’s terms, war was declared.

War is a horrible thing. Even if you don’t think you will be affected by war, everyone is in the long run. The idea that one country can use military power to take over another is an idea that should have been left in the 1940s, along with dictators and imperialism. And yet, Russia is in the process of taking over a country. But it isn’t just a country. It is people’s homes and their livelihoods. These are mothers, fathers, teachers, doctors, nurses and children. They didn’t ask for war.

Many Ukrainians have recounted going about their daily routines the day before war began, until they were woken up in the middle of the night by the sound of missiles whistling through the air or explosions rumbling the ground like an earthquake. Many Russians did not ask for war, either. Thousands of people have protested in the streets of Moscow and Saint Petersburg, and hundreds were arrested doing so. No one ever seemed to want war–except Putin. And if Putin wanted it, war was inevitable.

As battles in Ukrainian cities began, videos and updates began circulating like wildfire about the invasion. Videos showed Russian missiles being launched outside Ukrainian cities and hitting military targets. Images showed the capital city of Kyiv with smoke billowing on its skyline. Videos recorded by citizens and news reports featured audible shelling and gunfire in the background, and some reporters like CNN’s Matthew Chance reported live while firefights took place between Russians and Ukrainians mere feet away from him. In many videos taken across the country, air raid sirens rung out over deserted cities. Russian tanks were shown riding into northern Ukraine over the Belarusian border.

The documentation of the human side of the war was also not hard to come by. Videos showed hundreds of people gathered in underground subway stations to avoid Russian air raids in Kyiv. Some photos showed wounded civilians after Russian attacks. Photos showed some Ukrainians huddled and praying in the town square of Kharkiv. The reporting of the conflict has been besieged by misinformation, with many photos and videos being found to have been from earlier time periods. And reports filed in of casualties and wounded civilians, of which there have been hundreds of each.

Obviously, no one at UMass can even fathom what ordinary Ukrainians are going through right now. The thought of having your country invaded by a force that triples your own army is impossible for us to imagine. Nor is going on Twitter and seeing maps of your country with little red icons indicating where battles are taking place. It is all unfathomable and will likely never happen to us in the United States. And yet, I still feel an overwhelming sense of anxiety and dread. War is occurring in Europe. A massive invasion from one state to the other is something we have not seen in many years, and it is happening during our lifetime.

Why do I care so much for people I do not know from a country I have never been to? Is it a human’s inherent ability to care for other people who are being oppressed? Is it the overwhelming amount of noise from the battlefield that we have all been bombarded with on social media? Or is it the fear of Russia not stopping at Ukraine and possibly attempting to expand into NATO states like Poland or Finland, which would surely trigger U.S. involvement. Perhaps it is a combination of all three.

There is no way to sugarcoat this: what is happening in Ukraine right now is wildly out of our control.

There is no way any of us can influence Mr. Putin to stop his assault. But as Max Schwartz said in his recent column, we can talk about it with each other. If you’re feeling anxious, overwhelmed or just plain confused about the situation, talk about it with a peer or a loved one.

Have hope that Ukraine continues to fight back. Have hope that sanctions against Russia deter Putin. Have hope that war will be over soon. No war lasts forever. Whatever side you may be on in this war, we can agree that war is hell, and little is improved by it. If you’re feeling overwhelmed by all of this information, maybe take a break from watching the news or going on social media.

One final thing: keep the Ukrainian citizens in your thoughts. No matter how you feel about the conflict, Ukrainian citizens do not deserve to suffer in a war they did not ask for. They will get through this, and we should stand in solidarity against the war together.

Luke Halpern can be reached at [email protected] and followed on Twitter at @lukehalpern.