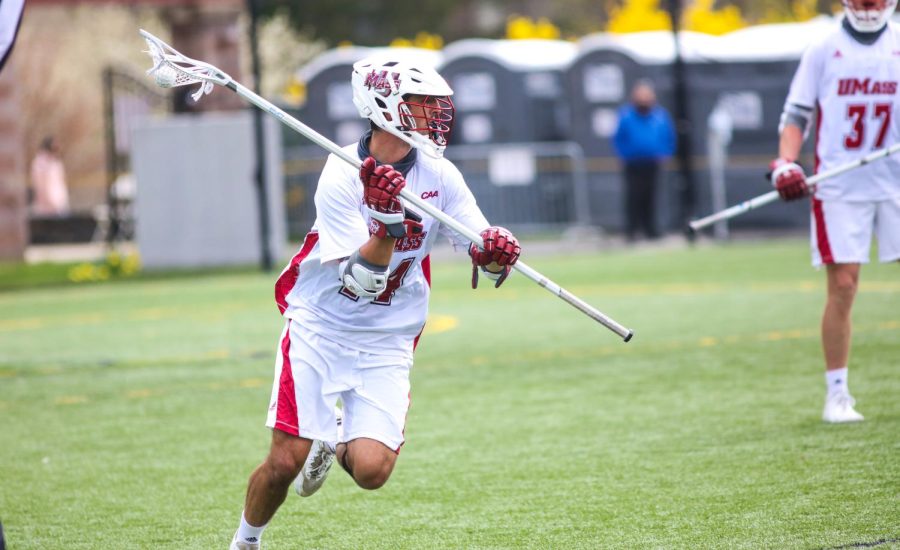 The Massachusetts men’s lacrosse team defeated UMass Lowell by a wide margin, 19-9, on Saturday in Amherst.

The Minutemen (1-1) came off a tough 14-13 loss to Army West Point a week prior in New York. The Riverhawks (0-2) similarly came off a heartbreaking loss to Quinnipiac, after falling to the Bobcats on a game winning goal with 12 seconds left.

It was a cold and snowy afternoon at Garber Field when the game began and throughout the first half.

“Fortunately for us, it stayed pretty light and right around freezing so a lot of it melted on the surface. It was a little slippery for a little bit,” UMass head coach Greg Cannella said after the game.

The Riverhawks scored the first two goals of the game, but the Minutemen exploded with a 7-0 run in the first quarter and finished the frame with a 8-3 advantage over the Riverhawks.

In the second quarter, UMass continued to score well, winning the quarter 3-1 and heading into halftime with a 11-4 lead over UMass Lowell. Senior attacker Gabriel Procyk scored two of his three total goals in the second quarter, which gave him a hat trick for the game.

The man-up conversions were a great improvement over last week’s performance as UMass went only one for four on man-up advantages in the game vs. Army.

“Obviously we were disappointed last week … we shot the ball fairly well, we made some pretty good looks. Overall, [big] improvement which is good to see and everyone got to play which is fantastic,” Cannella said.

Even though the snow dissipated as the second half began, the Minutemen’s dominance did not as they won the second half 8-5 to win the game. In what was a blowout win for UMass, everyone got an opportunity to play, and a wide range of players scored goals.

“I would say it’s a team win, you see how many people got on the board. Then you look at all the guys that played well defensively, we let up three goals in the 2nd quarter and 3rd quarter combined, that’s pretty good,” Cannella said.

The leaders in points for the game were the Tobin brothers, M. Tobin had two assists in addition to his three goals for a total of five total points. K. Tobin also had five points with his two goals and three assists in the game.

In face offs, sophomore face off specialist Caleb Hammett had a strong performance, winning 13 of 20 face offs in the game. Junior goalie Matt Knote played for 54 minutes and was also strong for the Minutemen, allowing only seven goals against him and recording 12 saves on the afternoon.

The Minutemen are now looking forward to their next game on the road against Boston University.

“Never played them [BU] so we have to familiarize ourselves with them,” Cannella said. “We have to continue to prepare the right way each week, that’s our job. I mentioned the scout group preparing our guys did a good job this week, we have to be ready to play.”