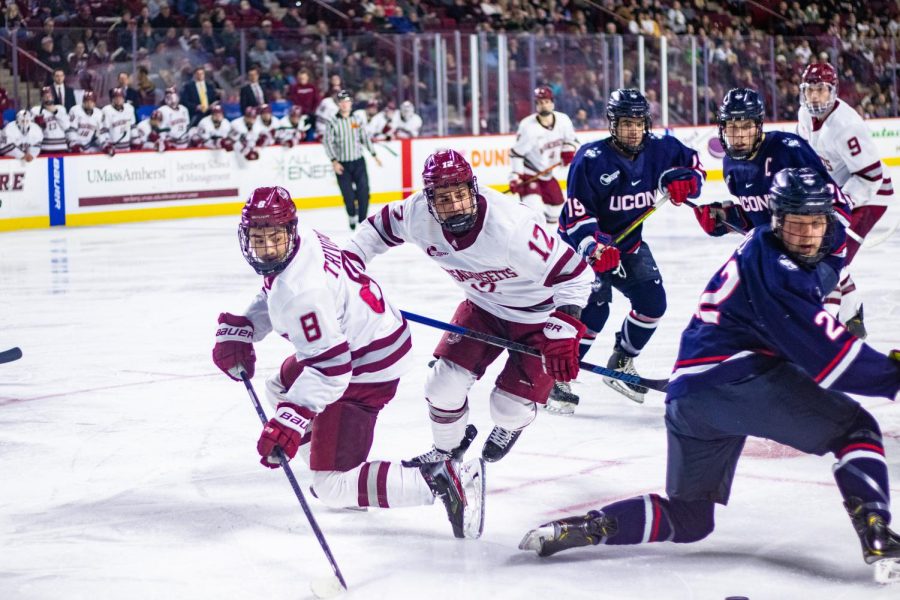 HARTFORD, Conn. —  A game of quantity versus quality in the offensive zone played out in favor of the Massachusetts hockey team on Friday against Connecticut.

“Preparing for this game I watched how well UConn had been playing and knew this was going to be a low-scoring, heavy game,” UMass coach Greg Carvel said after the game. “I thought our guys were outstanding tonight … real solid 60 minutes, I thought we deserved to win.”

UMass was chipping away at UConn goaltender Darion Hanson for two and a half periods before it finally got a goal past the netminder. A relentless 14 shot effort in the first period wasn’t enough to faze Hanson despite a few quality chances mixed in. The second frame saw a downtick in total Minutemen shots, but Hanson still needed to stand on his head a few times to keep the puck from slipping across the goal line. Hanson played with desperation and didn’t look like he would break at any moment.

That changed when UMass went to work on the power play halfway through the third period.

The Minutemen have seen consistent success on the man advantage this season but had a few power play chances nullified early on by taking penalties of their own and having to skate 4-on-4. Their second true power play of the game showed itself as one of the top units in hockey east. Ryan Ufko came away with the goal but from the time Josh Lopina won the offensive zone face off until Ufko attempted his one timer, all five UMass skaters on the ice had a hand in creating the scoring chance.

“That play from behind the net is a set play, we got good players who can execute,” Carvel said. “Ufko is a real good player, he’s going to score a lot of goals from the blue line, he’s got a skill at getting the puck to the net and getting it through.”

The Huskies played an entirely different game from the Minutemen offensively. They had difficulty maintaining offensive zone time and developing 5-on-5 chances but took advantage of unsettled opportunities and nearly made UMass pay for its slip-ups on defense. UConn had two of its shots ring off the post in the first period, mere inches away from finding the back of the net. It also found two breakaway chances through the first 40 minutes, but Minutemen goaltender Matt Murray turned both shots away without allowing a goal.

Murray made 19 saves on the night including the key breakaway stops and shut out the Huskies for almost 59 minutes before allowing a goal past him while UConn skated with a 6-on-4 advantage. Murray had solid defense in front of him from UMass and outside of the few mental mistakes, the Minutemen held strong in their own zone with a strong forecheck presence to limit the Huskies’ chances.

“[Murray] looked very confident tonight, we need him to be,” Carvel said. “This was exactly what we need from him, we need him to make a couple big saves and he did, he came up huge.”

Lopina helped secure the game late with a goal in transition to make the score 2-0, so even when UConn scored its first empty net goal it still needed more offensive fireworks to send the game into overtime. Though he struggled to win face offs early in the night, Lopina’s all-around third period performance made up for the slow start. The sophomore finished 14-25 on draws and was on the ice for both Minutemen goals.

UMass hasn’t played well on the road against the Huskies during Carvel’s tenure as head coach but picked up a decisive win on Friday. Now the Minutemen look to duplicate their success on Saturday night in the Mullins Center.

“This is the best we’ve ever played in this building since I’ve been at UMass,” Carvel said. “We won once here but we almost stole that game, tonight I felt like we deserved to win. Very proud of the team.”