The Minutemen are currently tied for No.1 in Hockey East standings 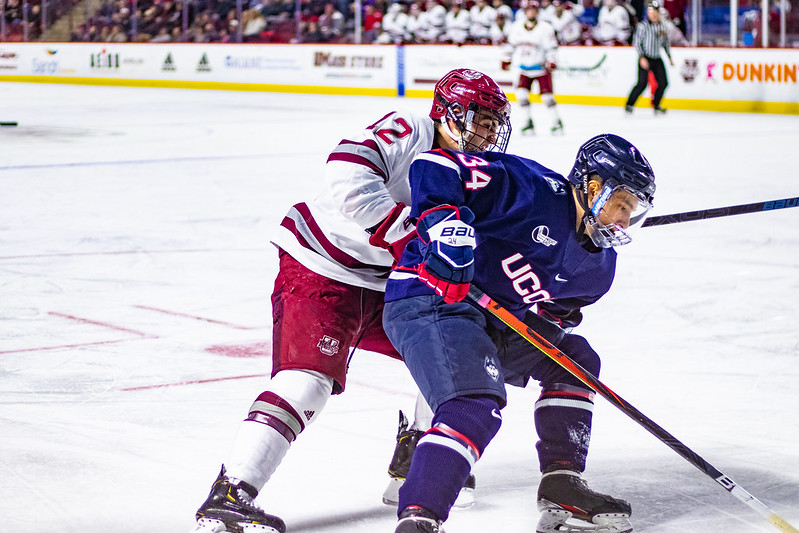 The Massachusetts hockey team goes into its series against UConn tied for No. 1 in Hockey East standings, but UConn tails only two points behind the Minutemen (16-9-2, 11-5-2 Hockey East).

The No. 10 Minutemen come off a four-game homestand heading into their series with the No. 20 Huskies (16-11-0, 12-6-0 HEA). UMass won three of four in that stretch, while tying a game to the University of Maine and losing in overtime.

Some of the lowest student turnouts at the Mullins Center this season occurred over the past four games. Chants have been quieter for the Minutemen, and the lack of a full student section is a major reason why.

Without being asked on Tuesday UMass head coach Greg Carvel talked about how the Minutemen need fans to turnout for their last two home games of the season, one being on Saturday night against the Huskies.

“It makes a huge factor,” Carvel said about student turnout to games, “The last couple games haven’t been a great turnout and I hope that we can count on the student body and the community to come out and cheer the team on.”

Carvel urged people to talk about the need for students to come to the games and how important students are to the team.

The Minutemen know going into the series that they need to put up a fight against the Huskies to add six more points in the standings. The HEA standings are close, and every point will count for UMass.

“We need to sweep this weekend,” senior Anthony Del Gaizo said. “It puts us in good shape. We want to win every single game. That’s our standard and we expect to win every game the rest of the year.”

The players that Carvel need to see more consistency out of are the bottom six players in this series. During recent games the bottom lines are taken out of the game all together if they are not playing to Carvel’s standards. During the third period the lines are sometimes cut to two or three lines instead of the usual four.

The UMass lineup has a lot more consistency compared to the start of the season due to the chemistry each line has built. The first and second lines especially, as they typically stay the same. The bottom two are constantly rotated and adjusted.

“Our top two lines have been pretty productive and to me they’ve been playing great hockey,” Carvel said. “But the bottom six can be difference makers and we really haven’t gotten much offense out of the bottom six forwards.”

The Minutemen have a strong third line, led by Lucas Mercuri and Ryan Lautenbach. But Lautenbach hasn’t added to the goal or assist column since the Northeastern series on Jan. 21 and 22 but has been able to use his speed to battle for pucks. Taylor Makar and Jerry Harding have seen more time on the fourth line due to the need of big bodies.

With only six games left in the regular season, there has been a lot of talk about the playoffs. UMass wants to focus on its six games at hand, starting with their series against the Huskies.

“It’s pretty crazy how we have only six games left,” defenseman Matthew Kessel said. “It’s just important that we keep just focusing on getting better each day knowing that there’s probably not too many of them left.”

The Minutemen travels to Connecticut for their first game of the series on Feb. 18 to take on the Huskies at 7:05 PM. Their second game will be home at the Mullins Center on Feb. 19 with puck drop at 7:30 PM.