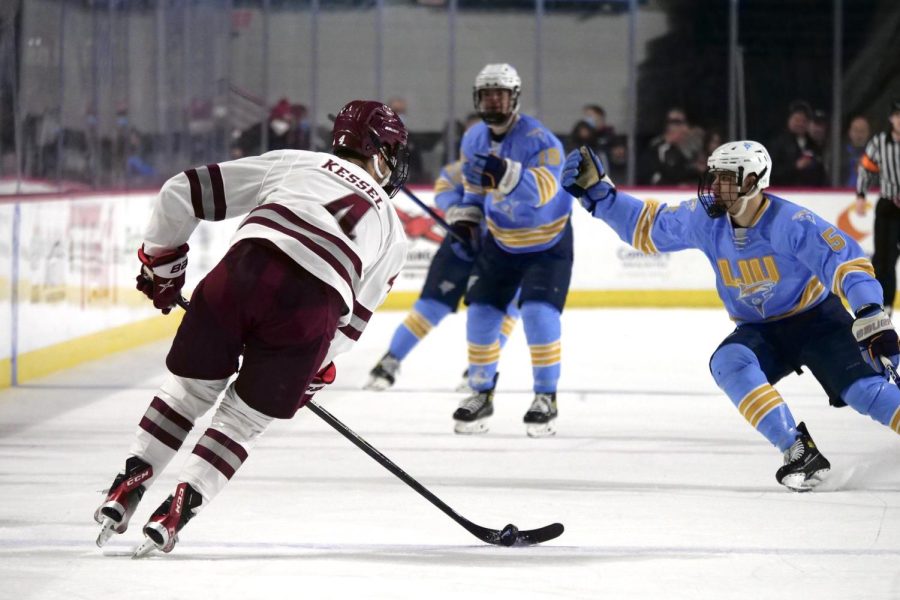 The Massachusetts hockey team’s offensive success Friday night spilled over into Saturday’s contest, guiding the No. 10 Minutemen (19-10-2, 14-6-2 Hockey East) to a dominant 8-2 win over Vermont on the road.

After splitting its past two series against Maine and Connecticut, UMass left no doubt during its weekend stay in Burlington, coming up with 13 goals in two games for its highest scoring weekend of the season.

“Another solid game by the team, I thought Vermont came out ready to play and it took us a little while to get out feet under us but once we got it going the kids played really well,” head coach Greg Carvel said after the game. “Special teams were outstanding tonight, and we got a lot of scoring up and down the lineup.”

Unlike Friday’s matchup, the Minutemen got off to a slow start against the Catamounts (6-23-2, 4-15-2 HEA) on Saturday. Both teams were getting quality offensive chances turned away by their respective goaltenders in the first period. Matt Murray finished the frame with six saves while Vermont netminder Gabe Carriere stopped seven. But over 18 minutes into the period, UMass finally got a chance that was too good not to capitalize on.

A successful trap in the neutral zone with under two minutes to play in the period allowed Cal Kiefiuk and Reed Lebster to skate down the ice on an odd-man rush against one Catamount defender. Kiefiuk held the puck and went all the way in tight on Carriere before dishing a pass to Lebster for an easy goal.

The Kiefiuk-Lebster connection didn’t stop after the breakaway goal. In the second period Lebster returned the favor, tossing a pass to Kiefiuk’s stick and allowing Kiefiuk to score a goal of his own. The duo had a bounce back weekend offensively after a few relatively quiet games in a row.

Vermont showed no signs of slowing down through 30 minutes of play, though. Despite not finding a goal in the first period the Catamounts applied significant pressure to Murray but could not slip a puck past the graduate student. At that time UMass only had a 2-0 lead and was on its heels at times, but that quickly changed towards the end of the middle frame.

The Minutemen opened the flood gates and potted four straight goals in the final five minutes of the second period to take a 6-0 lead and put the game far out of reach even with 20 minutes still to play. Josh Lopina started the five minute stretch of dominance and it ended with a Ryan Ufko buzzer beater goal. The highlight of that time came from Scott Morrow who showed off his hands and dangled the puck past Carriere for a slick goal.

The confidence that UMass built in its special teams on Friday took an even larger step forward on Saturday. The Minutemen finished a perfect 4-4 on the power play and their penalty killing unit blanked Vermont as well, clearing pucks down the ice without giving the Catamounts many scoring opportunities on the man advantage.

“We were opportunistic,” Carvel said of the power play success. “Kessel shooting from the point was effective … we end up scoring seven power play goals on the weekend, which is pretty impressive. The guys did a good job executing.”

UMass scored a pair of third period goals that didn’t matter towards the outcome of the game, but Aaron Bohlinger’s lamp lighter was a personal highlight for the sophomore defenseman. Bohlinger has had an up-and-down year with injuries but has gotten increasingly better as the season moves along, and he earned his first goal of the season in the final frame of the contest.

“I teased him before the game that he was the only guy in our lineup that hadn’t scored a goal this year and I tried to give him some karma so when he scored, he came back to the bench and thanked me for it,” Carvel said. “He’s been trending that way, he’s finally feeling healthy, he’s finally feeling good on the ice and he’s a very good player when he’s moving and using his head. I thought he did a good job this weekend.”

With the sweep the Minutemen have given themselves a good chance at finishing in first place in the HEA. They close out their regular season with a home-and-home series against Boston College starting on March 4.

“This team is starting to round out, starting to understand its identity and playing good defensive hockey, and that leads to good offense,” Carvel said. “It’s great that we scored a lot … but it really has no effect on anything going forward.”