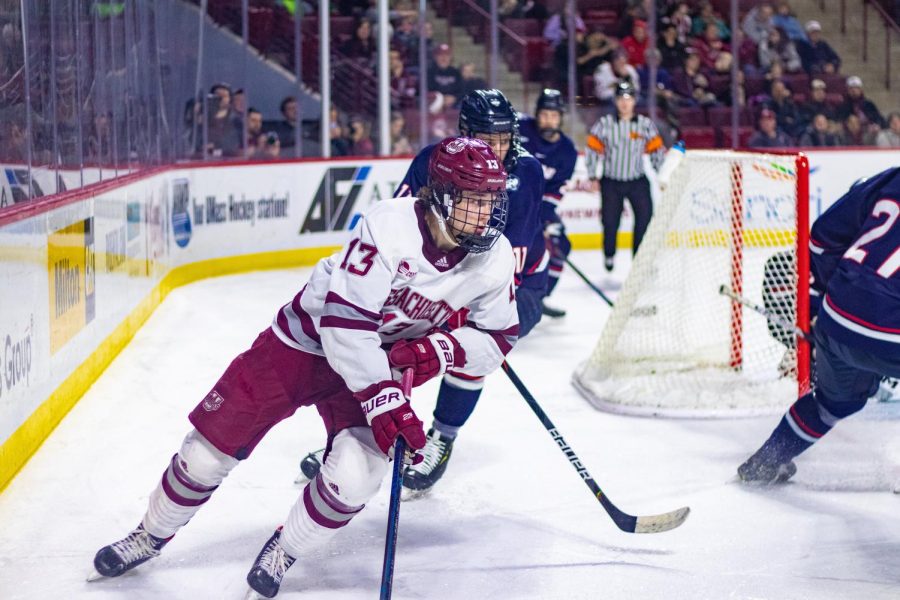 HARTFORD, Conn. — The Massachusetts hockey team’s head coach Greg Carvel relied heavily on the first two lines throughout games. The second line was one of the lines to make an impact against the University of Connecticut on Friday night.

Carvel stressed during media availability on Tuesday that he needs offense from a line like the second line when the bottom six players cannot deliver for the Minutemen. The line in the game against the Huskies on Friday was getting shots on goal to deliver what Carvel wanted from them.

Eric Faith slotted into Anthony Del Gaizo’s usually spot as center on the second line, moving Del Gaizo down to the third.

Going into the game Carvel had said that left wing Cal Kiefiuk was 90 percent but he was still able to make his presence known in the game despite not being fully 100 percent.

“Moved [Faith] there. [Kiefiuk] came back earlier than we thought so that was a bonus for us. They played a solid game. I don’t remember them having a lot of scoring chances or them being responsible. I thought they had a pretty neutral game,” Carvel said.

Kiefiuk ended the first period with the most shots in the Minutemen lineup with a total of three shots and continues to lead the team going into the second period with four shots. One of his shots, on a breakaway after Faith took a defensive zone faceoff when Kiefiuk got the puck on his stick. Though Kiefiuk had a solid shot on goal, the puck was blocked away. He ended Friday night with the most shots, with five shots.

The Minutemen were put on a 4-on-4 when Huskies player Harrison Rees and UMass’ Bobby Trivigno were whistled for roughing at the end of the first period. Heading into the second, Reed Lebster was put on the special team’s unit. During his shift he had a breakaway but came up short when he fell close to the goal and could only tap the puck weakly.

UMass had two 4-on-4 in the game, Lebster and Kiefiuk were put on them both times. During the 4-on-4 in the second frame, Kiefiuk used his speed in the defensive zone to pass the puck to Lebster to have break cleanly into the offensive zone.

Multiple times in the game the line had scoring chances but would come up short. There were many times when the line would have a solid chance but would fall when attempting to shoot the puck.

Later in the second frame, Faith had a shot on net when he was speeding down the ice, but also fell before he could get a quality shot on goal.

Due to the line’s neutral game, Taylor Makar slotted into Lebster’s spot at one point during the game, but Lebster went back to his original spot in his next shift

An area where the line was not up to standard was face offs, which typically is an important part of offense for the Minutemen. Faith had six wins and seven face off losses, while Lebster had one win and one loss.

In the third, Faith was a crucial part to the penalty kill on Trivigno’s penalty. When the Huskies were rushing the net during the penalty kill, Faith stayed in front of Matt Murray and slapped away a shot from a Husky to keep Murray from having to cover the puck.

The second line and the Minutemen will travel back to the Mullins Center Feb. 18th to attempt a sweep of the Huskies. Puck drop will be at 7:30 PM.

Kayla Gregoire can be reached at [email protected] and followed on Twitter @Kaygregoire.