Weller: Analyzing the ups and downs in UMass’ series against Maine

The Minutemen allow three powerplay goals over the weekend 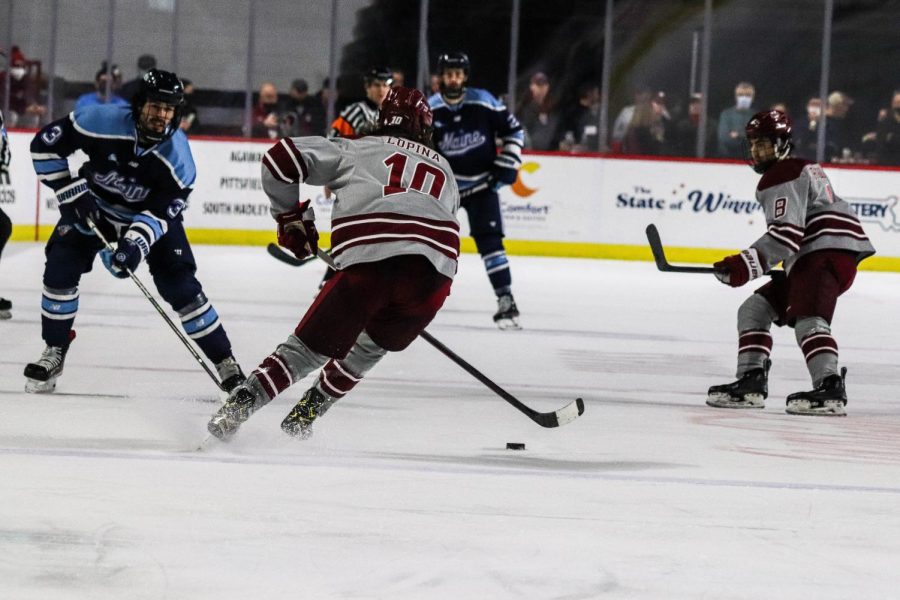 The Massachusetts hockey team took the ice on Saturday night looking to redeem itself after a 3-2 overtime defeat to Maine on Friday and did so successfully, picking up a 4-2 win to cap off its weekend series on a high note.

Slow starts have been a problem for UMass this season, and its first game against the Black Bears (5-17-4, 3-13-2 HEA) was no different. Greg Carvel admitted that Maine came out prepared to play and were the better team in the first period. With the return of Ben Barr to the Mullins Center and his style being similar to Carvel’s, the Minutemen knew that they had a tough battle ahead. Throughout many moments of the weekend, it was clear that UMass was the more cohesive and experienced team, but on Friday UMass did not step out onto the ice ready to play from the first whistle and was unable to produce a dominate performance in all periods.

That led the game to overtime, and even though the Minutemen should have had a skill advantage skating 3-on-3, Maine quickly generated a break away and Donovan Villeneuve-Houle provided the Black Bears with the win. Carvel said it was inexcusable to allow Maine to score both its second and third goal on odd-man-rushes. The odd-man rushes have been a trend this season, but with more protection and less give always in the neutral zone, there would be less pressure on Matt Murray to come up with tough saves.

Saturday night saw a different start for UMass, with Garrett Wait getting an early goal, followed by Josh Lopina, and Eric Faith to put the Minutemen up by three. However, despite UMass dominating possession for most of the time, sloppy plays and penalty minutes allowed Maine to narrow the deficit to one.

The Minutemen are averaging 3.8 penalties a game and have had 13 power play goals scored against them in 207 minutes of penalty killing.

Many of these penalties are unnecessary and force UMass to play a more defensive game rather than working to get the puck forward. This was an issue on Feb 5. in the second game against LIU, with Carvel saying that it was a main cause for the lost momentum. In the first quarter, the Minutemen were able to get numbers forward and control the puck in the offensive game, but the moment the penalties began, the shots became fewer and far between.

Switching gears to the positives throughout the weekend, Garrett Wait has started to light up on offense. The senior has six goals in the last four games, with a total of 23 points this season. Carvel compared his current level of play to last year, saying that he seems to step up towards the end of the year.

With Lopina controlling face-offs and Wait along with Trivigno recording multiple points a night, the first line deserves the recognition and reward for its positive impact.

Despite not showing it on the scoresheet as much over the weekend, UMass displays depth down the line chart to the younger members of the team. Lucas Mercuri and Ryan Lautenbach make their presence known on the ice and are critical in creating opportunities. Their current success bodes well for a bright future under the direction of Carvel.

The Minutemen have the skills to compete against every team they face, however the slows starts and multiple penalties will continue to leave them scrambling, especially as games become more important and competitive heading into the end of regular season play.

After a four-game homestand, the Minutemen will travel to Storrs, Conn. to take on UConn at 7:05 p.m. on Friday.