UMass is one of the favorites to win the conference championship 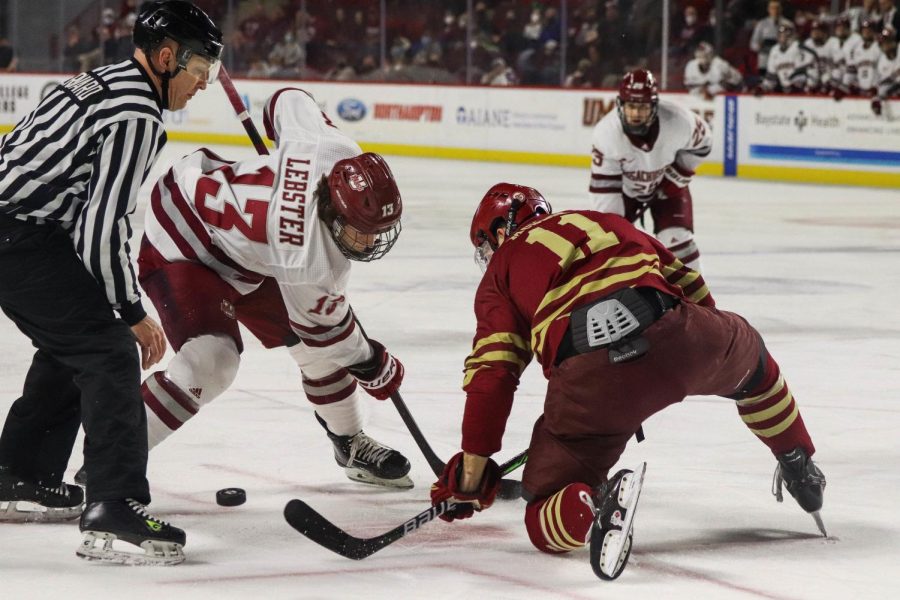 Hockey East has been weird this season.

Teams like Boston College and Boston University that historically dominated conference play saw periods of struggle at different times throughout the year. Meanwhile, other teams like Merrimack and UMass Lowell are exceeding expectations. And the Massachusetts hockey team has been difficult to read, fluctuating up and down the national USCHO poll from as high as a No. 1 ranking to as low as No. 14.

What does that mean for the conference tournament? This year’s crop is much harder to judge than in years past. It seems like all eight remaining teams have a legitimate shot at winning the title and earning an automatic qualifier to the NCAA tournament. I’m here to break down each team’s chances at winning the Lou Lamoriello trophy in 2022.

Despite missing out on the No. 1 seed heading into the conference tournament, the Minutemen should still be considered favorites to win the HEA title at the TD Garden. They’re defending national champions and have some of the best talent in the conference including Bobby Trivigno, Matthew Kessel, Ryan Ufko and Scott Morrow.

The only thing that could hold back the Minutemen is mental mistakes. It isn’t often that a team downright outplays UMass but giving up multiple odd-man rushes per game hurts the Minutemen and they need to clean up that aspect of the game. Head coach Greg Carvel is trying to get UMass to find the line between the aggressive play that wins it games and the reckless style that loses them. If the Minutemen can land in the sweet spot between the two, they could win back-to-back conference titles.

One of the most important factors to making a deep playoff push is having a hot goaltender and Devon Levi is one of the hottest in college hockey. Levi has a .953 save percentage and can take the Huskies far in the HEA tournament. There’s enough talent around him to help make the push, too, including Aidan McDonough, the third leading scorer in the conference.

Northeastern’s only true area of weakness is in the total offense it generates compared to its opponents. The Huskies average under 27 shots on goal per game while opponents average over 31 shots against them. In most cases Levi covers this up, but on a rare off night like he had against UMass on Jan. 22, those extra offensive chances can harm Northeastern.

Don’t let the blowout loss to Maine fool you, the Terriers are still red hot having won nine of their last 11 games to close out the regular season. They’re travelling to Hartford, Conn. for their quarterfinal matchup, the same arena they’ve already beaten UConn twice this year. Behind Drew Commesso in net and two 30-point scorers in Wilmer Skoog and Domenick Fensore, BU can extend its dominant stretch into the postseason.

The chink in the Terriers’ armor is their ability to close out one-score games. BU is 6-5 in games decided by a single score so if opponents can keep the contest within reach, they have a chance to knock the Terriers out of the tournament.

The River Hawks are a simple and consistent team this season. There isn’t a win that jumps out in their record and although they have a few bright spots in the lineup, there isn’t one person that wows fans in the arena with his crafty skills. UMass Lowell grinds out hockey games and wins them. It created magic in last season’s tournament, making it all the way to the HEA championship as the No. 7 seed. Now it has an opportunity to make another run as less of an underdog.

The one weakness that could cause the River Hawks to struggle is their penalty kill unit, which is only operating around 80 percent. If UMass Lowell starts taking too many penalties in the playoffs it can put them in a really tough spot.

Forget the seeding next to their name, the Eagles are a flat out good hockey team. They have a really tough first round matchup against Northeastern but if they can escape that game with a win, they have a sneaky shot at capturing the conference title. Goaltender Eric Dop is playing his best hockey and the talent on BC’s roster still runs deep, even outside of Jack McBain and Marc McLaughlin. The Eagles will also be playing with intensity knowing that they likely need to lock up an automatic qualifier to advance to the NCAA tournament.

There is one glaring problem that BC needs to fix, though: it cannot self-destruct in key moments. The Eagles have lost plenty of games this year by a wide scoring margin and they have a difficult time chasing games. They need to control the pace and force teams to play into their style of hockey if they want to be successful this season.

I’ve got the Warriors as my other dark horse candidate because they just don’t seem to go away against anybody. Their conference record isn’t anything to write home about, but Max Newton is flying under the radar in point scoring and his big-play ability can help Merrimack win playoff games. The Warriors also have a 25 percent power play unit so they can make opposing teams pay for their reckless play.

If Merrimack wants to shake up the HEA postseason, the biggest thing holding it back is not having a clear starting netminder. Hugo Ollas and Zachary Borgiel have split time in net this season, but the Warriors need to choose one and stick with him the rest of the way. I think the answer is Ollas, who has a .927 save percentage in 17 games this year, but whichever goaltender they choose needs to play lights out for Merrimack.

The Friars have decisively won enough non-conference games to significantly bolster their team and individual player statistics this season, but it’s difficult to judge just how good this Providence squad really is. Its season has mainly consisted of dominant stretches over the low end HEA teams and major struggles against the cream of the crop.

The Friars have the coaching, systems and players in place to win postseason matchups, but they have to put those things together against the best teams, and their quarterfinal matchup against UMass should be very telling of what Providence is capable of this year.

The Huskies have played very well in 2021-22 and based on the quality of some of their conference wins alone they could be considered serious contenders. With that being said, I have some concerns about their offense which makes me hesitant to pick them to make it past the quarterfinal round.

UConn doesn’t have much depth scoring. Ryan Tverberg and Jachym Kondelik are the only two players with over 20 points in conference games, and the Huskies’ power play unit is operating at an abysmal 14 percent. Those two shortcomings mean a potential early exit for the No. 4 seed in the conference tournament.