Minutewomen outscore Commodores 18-7 on the road 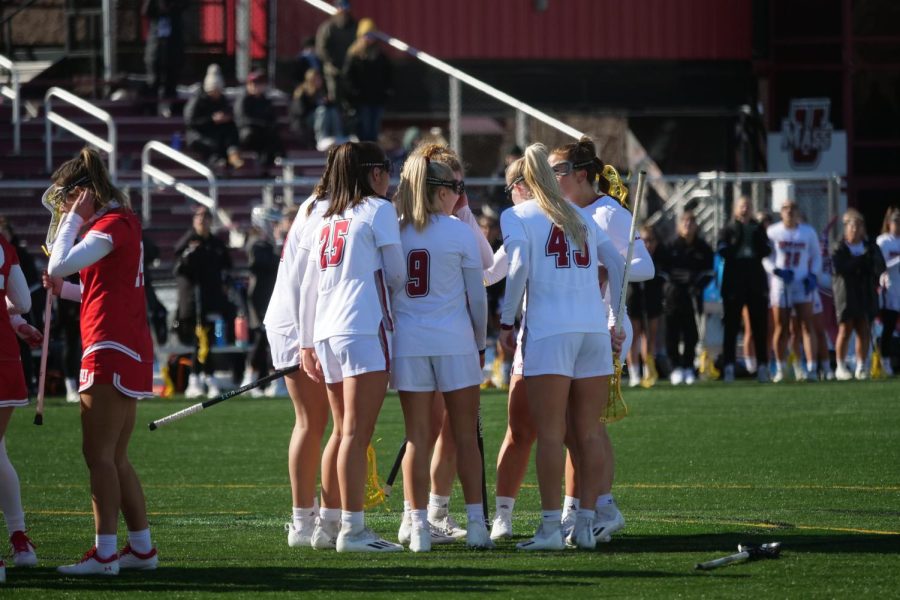 Another day, another dominant victory for the Massachusetts women’s lacrosse team.

UMass (4-2) lost a tight game against Connecticut on March 5 but hit the road and got back to its game on Friday night, controlling the pace of play and routing Vanderbilt 18-7. The victory showed the Minutewomen’s ability to pull away from tight contests and they can take away a lot of positives from the game.

Not much else needs to be said about an 18 goal performance, but the offensive production went far beyond that number. UMass attempted 39 shots in the contest and wasn’t afraid to let the ball fly even when the game was close. In the first half the Minutewomen only scored six goals but took 24 shots. They turned that high pressure into high efficiency in the second half, scoring 12 goals on their last 15 shots.

UMass began carving up the middle of the offensive zone in the third quarter, finding openings on the crease and giving the No. 19 Commodores (3-3) goalkeeper Paige Gunning no chance to make saves. Alex Finn, Kendra Harbinger, Kelly Marra and Olivia Muscella all notched hat tricks, and there was simply too much fire power for Vanderbilt to handle.

Finn is here to win

It seemed like every time UMass needed something offensively, Finn was there to provide that spark. She finished with a team-high six points, tallying four goals and two assists. Harbinger has been the primary offensive contributor for the Minutewomen, but that meant that Finn got a more favorable matchup against the Commodores’ No. 2 defender while their primary lockdown player guarded Harbinger. Finn exploited that matchup on Friday and stepped up big in the attacking zone.

Winning the battle in transition allows teams to control the pace of the game; they can push the ball up the field with speed to create unsettled situations or they can slow down and get into their systems. On Friday UMass did a little bit of both, and they were able to dictate that thanks to its dominance in transition.

The Minutewomen had 23 successful clears and only failed one over the course of the game. They had no difficulty getting into their offense however they desired. And on top of that, Vanderbilt had a difficult time getting the ball into the offensive zone which compounded its issues. UMass forced the Commodores into eight failed clears, eating away any momentum Vanderbilt generated from its defensive stops.

Stifling defense was difficult to solve

Only letting up seven goals can be indicative of an impressive performance in net, but UMass goalkeeper Gina Carroll only needed to make eight saves against Vanderbilt. The Minutewomen defense was constantly swarming the ball, forcing the Commodores to make mistakes and come up empty on possessions.

Vanderbilt only scored two goals in the second and third quarter combined and had one stretch of nearly 15 minutes without a score. As soon as UMass’ offense got clicking, its defense was holding down the fort on the other side of the field and the Commodores stood no chance at staging a comeback.

In a game full of highs, draw controls were a low

Gone are the days of Caitlyn Petro dominating the draw control circle for the Minutewomen.

Just about everything went UMass’ way on Saturday except the battle on draws where Vanderbilt won 17 and the Minutewomen only won 12. Petro was the best draw control player in UMass history and her absence has been felt this season. The Minutewomen can’t expect to replicate Petro’s success, but they need to find somebody capable of winning over 50 percent of their draws, because that area of the field is the only thing holding UMass back from winning games against the top teams in the country.

Expect the Minutewomen to run through the Atlantic 10 on their way to an automatic qualifier in the NCAA tournament, but without a go-to draw control specialist, they will struggle when it matters most.