‘We’ve been in the rooms where the action happens’ 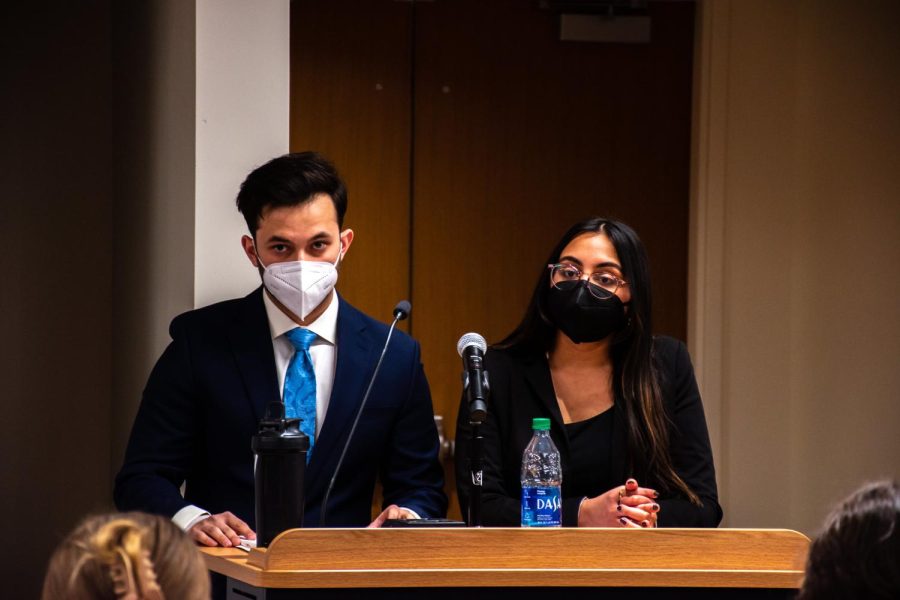 Shayan Raza and Meher Gandhi announced their campaign for president and vice president of the University of Massachusetts Student Government Association on a platform of transparency, equity and assisting UMass student groups.

As the current secretary of the registry, Raza has a close relationship with Registered Student Organizations, but feels as if he could be doing more within the SGA to help students.

“A lot of problems existed that were above my role as secretary of the registry. I could push for some ground, but there was a bigger gap that needed to be filled,” Raza said.

“[Gandhi] and I both have put in a lot of work on our projects in the past, but the scope of them is reaching a point where we know that it’s beyond our roles,” the junior economics and legal studies student continued.

Gandhi agreed and expressed her desire to use her experience as associate speaker of the senate and deputy secretary of the registry in a position that can allow her to make a bigger impact. “I want to take the accumulation of the knowledge that I’ve learned the past three years and put that towards being vice president,” she said.

“Something I’ve really wanted to see from the executive branch is for them to lay out what their goals are and keep track of what progress has been made,” said Gandhi, speaking on their campaign promise of transparency.

“We’ve talked about making a page on the SGA website to show what we promise you from our campaign platform and check in on the progress that’s been made,” Gandhi continued.

Furthermore, Gandhi plans to fill the cabinet positions with students possessing the “highest level of expertise” in their fields to help facilitate their projects.

“The executive branch is a lot bigger than the two of us. Some of the promises we made, we know we can’t do by ourselves, so we want to prioritize this big move in a productive fashion with really good people,” Raza said.

As secretary of the registry, Raza has worked as a liaison between student groups and administrations and seeks to expand communication between the two in his role as president.

“Administrators and RSOs have been pretty disconnected,” he observed. He plans to create a round table with student group leaders and administrators to properly address the needs of RSOs.

“We’re also looking to audit the current process of budgeting within the Student Activity Trust Fund,” Raza continued. The SATF directly funds student groups and has been cut consistently over the past few years. By auditing the budgeting process, Raza hopes to more accurately allocate funds so student groups are better equipped.

As the two pilots of the Equity Fund —an SGA-sponsored account that grants $60,000 of emergency finance money to assist any group that plans to support diversity equity and inclusion— Raza and Gandhi aim to further increase equity in terms of accessibility and racial justice at UMass.

“We are not ADA compliant,” said Raza, referencing the lack of push-button doors and other accessibility features that students with disabilities need to navigate campus. He plans to “create a position within the executive branch related to accessibility” and to “make sure that the students that have a stake in this fight are at the proper conversations.”

Gandhi plans to improve catering services from businesses outside of UMass for cultural RSOs that require food for their events specific to their culture and to expand “anti-racist training” across campus in accordance with UMass NAACP’s recent demands.

Raza and Gandhi believe that their combined experience in the SGA and established connections with administration provide them with a strong bid for the presidency and vice presidency.

“We’ve been in the rooms where the action happens,” Raza said. “We’ve done the work, we’ve shown that we’ve been productive and we’re good on our promises.”

Voting for the 2022 SGA Spring Election opens on March 1 at midnight and closes on March 4 at 5 p.m. on Campus Pulse.

Lucas Ruud can be reached by [email protected] and followed on Twitter @LukeRuud.