The SGA also swore in the new President and Vice President 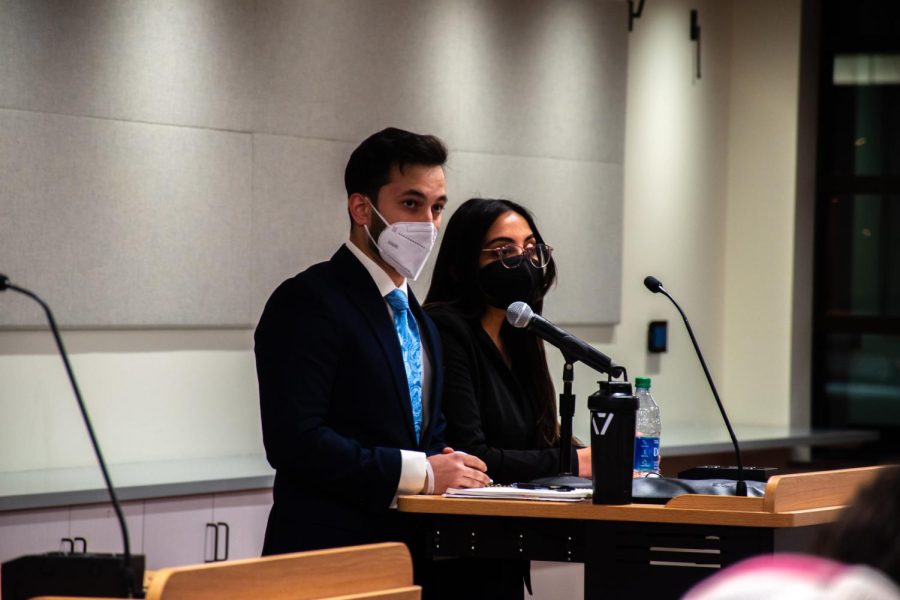 By George Prodanas and Sophie Hauck

The University of Massachusetts Student Government Association met on Wednesday evening to review three motions and usher in a new era of SGA leadership.

Chair of the Finance Subcommittee Ian Harvey sponsored a motion requiring the SGA Elections Commission to record and publish minutes from every meeting they hold. Eight senators and the Administrative Affairs Committee co-sponsored this motion.

“There’s always this cloud of uncertainty,” he said. “The point of this is simply just to clear that up.”

Harvey proposed the Commission not only take and release minutes within 48 hours of the meeting, but they must also announce all their meetings and publish the meeting agenda 48 hours in advance.

Multiple senators expressed issues with the proposed bylaws, citing concerns that the instructions for taking and publishing minutes were unclear. The senate voted to table Harvey’s motion until the April 6 senate meeting, and Harvey intends to edit the proposed bylaws based on senators’ concerns.

Senator Kenny Wright sponsored a motion to reconsider defeated motions in the SGA.

“Motion to reconsider just means that, at the same meeting, motions can be redone [or] reviewed,” Wright explained.

“This essentially is a safeguard to ensure that when mistakes are made, and yes, they are made, that we have a way to rectify them,” Senator Ed York, who co-sponsored this motion, added.

“We cannot accurately state that we represent the will of our constituents if we one, cannot admit we make mistakes and two, not have a way that can fix a mistake when it is made,” York said.

Multiple senators expressed excitement for the motion, referencing their struggle to find research positions without the help of a resource such as the proposed database.

“Students are really frustrated about not being able to find research opportunities,” Carino said.

“There are a lot of structural inequities that make it harder for students to further their academics and potentially careers,” the academic oversight committee chair added. “If we have a chance to level that playing field, I would like to do that.”

York was the senator who brought this idea to Carino, working closely together to write the proposed bylaws.

The senate unanimously voted to pass Carino’s proposed motion. Carino and York will next seek approval for the registry from UMass faculty.

“It’s with a heavy heart that I will be stepping down tonight,” Collins said. “I’d like to think that in some capacity, I was able to make progress toward a goal that I had […] to bridge the gap between the two branches of the SGA.”

“People around campus laugh at us and say that we take this way too seriously,” Marcosa noted. “What they don’t realize is that it is serious. We can and do make actual change in this very room.”

The senate gave a standing ovation to Collins and Marcosa for their dedication to the SGA. President-elect Shayan Raza and Vice President Meher Gandhi then swore in as the next executive leadership team of the SGA.