Amherst residents, Five College students and professors gathered in the Amherst center to show their support for Ukraine 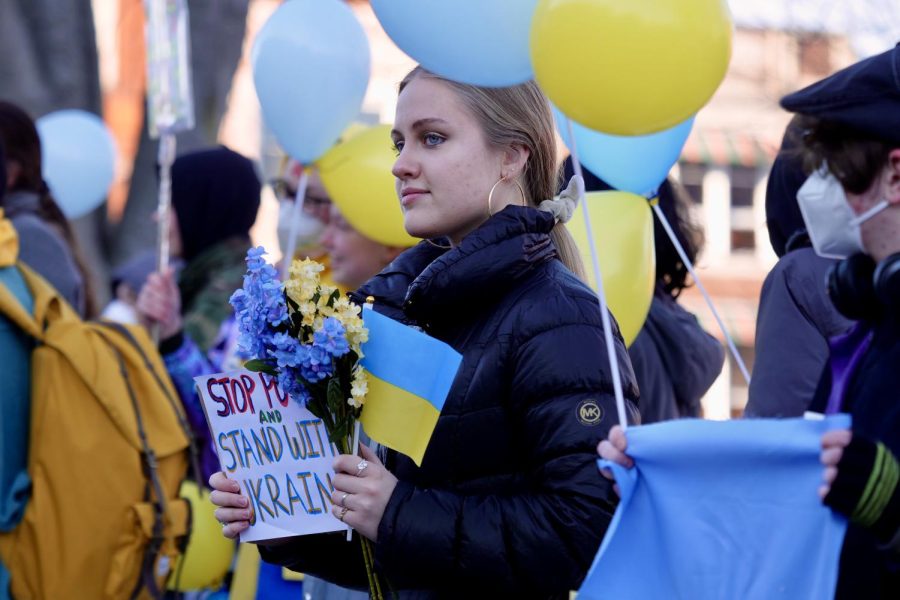 In the wake of the Russian invasion of Ukraine, support for the country sprang to life in Amherst center on Friday. Around 50 protesters showed up in 34-degree weather waving vibrant blue and yellow flags, holding sunflowers and colorful signs.

Amherst residents, both adults and children, Five College students and professors came together facing their signs at passing cars, many of which honked their horns throughout the afternoon to show their support. Throughout the duration of the demonstration, participants handed out flags, sunflowers, blue and yellow balloons and even materials to make their own signs.

On February 24, after months of prolonged tension between Russia and Ukraine, Russian President Vladimir Putin launched an assault on Ukraine. Over the past week, Russian troops have mainly pressed towards and attacked three of Ukraine’s cities: Kharkiv, Kerson and Kyiv, the capital city. Putin claims that Ukraine has presented a threat to the development and existence of Russia, though critics argue that Ukrainian President ​​Volodymyr Zelensky’s democracy does not present any threats to its neighbor.

While Russian troops invade, Ukrainian refugees are seeking shelter in Poland, Romania and other close-by countries. Some are fleeing to the US. In total, over a million citizens have left Ukraine since the invasion began.

“I want to support my country, to support people who are fighting to protect my country. All the soldiers, all the people that live there and experience all the terrors of war,” Mariia Klymenko, a Mount Holyoke student from Kyiv studying physics and math, said.

Klymenko was handing out Ukrainian flags she made herself. She explained that the blue on top of the Ukrainian flag represents the sky, while the yellow on the bottom symbolizes fields of wheat which Ukraine is known for.

Klymenko is still in touch with friends back home in Kyiv, including one friend who is 21 and an active Ukrainian soldier. “I am in contact with all of my classmates,” she explained. “One of my classmates is actually in war. He went to the military college and now he is fighting alongside soldiers.”

Also from Ukraine and present at the demonstration was University of Massachusetts professor Bogdan Prokopovych. With a blue Ukrainian scarf around his neck and multiple signs shared between him and his wife, Ina Ganguli, Prokopovych explained that he thinks every small action countering Russian propaganda and supporting Ukraine counts in aiding his home country at this time.

“As long as we can amplify the message that it’s wrong to invade a country, to show people, children, that it’s wrong in this day and age, that one deranged dictator can create so much pain, that it’s unacceptable. I have family back in Ukraine so it’s very worrisome, it is for many people,” Prokopovych said.

“I think there’s a lot that can be done on this end for those Ukrainians that just got stranded here. The reports [estimate] about a million refugees, my sister just became a refugee here,” he continued. “So, there will be so many people that will be looking for a place, like for short term and medium term, to stay until this madness ends.”

He explained the meaning behind his hand-drawn sign that illustrated a military tank with a sunflower blooming from it. The sunflower has become a symbol for Ukraine amid the invasion, as the country is known for its sunflower seeds.

Ina Ganguli, a professor of economics at UMass and Prokopovych’s wife, recalled the personal symbolism behind Prokopovych’s sign. “His father was a tank driver in World War II and he’s Ukrainian, so he’s got a special place in his heart for tanks, but then the [sunflower shows] the idea that it should be peaceful,” she said.

Prokopovych and Ganguli referenced a viral video that recently surfaced of a Ukrainian woman urging a Russian soldier to carry sunflower seeds in their pockets, so that when they die a sunflower will grow, sustaining the memory of Ukraine.

“And actually, in Kyiv, there’s a tank we used to go to, that is painted over with flowers,” Ganguli added. “It’s supposed to represent peace, and you never thought you’d see tanks in Kyiv shooting for war.”

A group of students from Amherst Middle School also showed up in support of Ukraine. Thirteen-year-old Nat Auerbach said his civics class has been discussing the role of social media and its impact on Ukrainian and Russian people. “In our civics class, we were actually learning about some of the people in Ukraine and even some people in Russia who were using social media as a way to get out a lot of information about what was happening,” Auerbach said. “And the media is being controlled in Ukraine and Russia, so it’s hard to get that information.”

Mar Gubrium, who is also thirteen, felt that social media is the best way to “spread the word” about ways in which people can support Ukraine. “Do what is in your realm of possibility,” Gubrium suggested.

Presley Forest, a UMass student studying political science and Russian was an organizer of the protest. Forest lived in Ukraine for most of her life and still has family there today. She was touched that so many people came to the demonstration. “I hope that people don’t see this as purely a political thing, and also think about all of the people who are being affected by this right now in Ukraine and out of Ukraine,” Forest said.

“Basically everything I have is over there [in Ukraine],” she said. “It’s very emotional, actually, because I didn’t expect this many people to come when we organized this.” Forest called on Americans and all those watching the bloodshed from the outside to not only continue to gather, but to donate supplies to Ukrainians in need. She referenced her friends who go to school in Europe, who are organizing donations of medical equipment, clothing and food to send to Ukraine. She acknowledged that while it is expensive to do so from the United States, finding an organization doing the work would still “help a lot of people out in Ukraine who are going through a lot of hardship.”

“Slava Ukraini,” Forest stated. “That’s all I have to say.” The phrase translates to “Glory to Ukraine.”

U.S. troops have yet to act, although the U.S. and U.K. are imposing sanctions on Russia to stagnate its economy. Central to this conflict is the North Atlantic Treaty Organization, or NATO, an international military alliance made of thirty countries, which was created after World War II. Some believe Russian troops might move to invade Poland—a country that is a member of NATO. Article five of the Treaty states, “An attack against one Ally is considered as an attackagainst all Allies,” and means that the status of U.S. involvement could change if spurred by further invasions by Putin.

“I think that America is supporting Ukraine a lot, it’s sending some ammunition there, it’s sending some people who want to fight for Ukraine,” Amherst resident Irina Yekuv said. Yekuv is originally from Western Ukraine and still has friends living there.

“Russia destroyed many cities in Ukraine and my friends live in Kyiv and in Western Ukraine and they’re hiding from bombs and I worry about them a lot, about their lives. I think that Russia should immediately stop what it’s doing,” Yekuv continued. While concerned about her country and her friends, Yekuv still hasn’t given up hope.

“So far, Ukrainians have not given up and they’re fighting. And I believe that Ukrainians will prevail and that it will end, maybe not soon, but end as a victory for Ukraine. That’s my belief.”