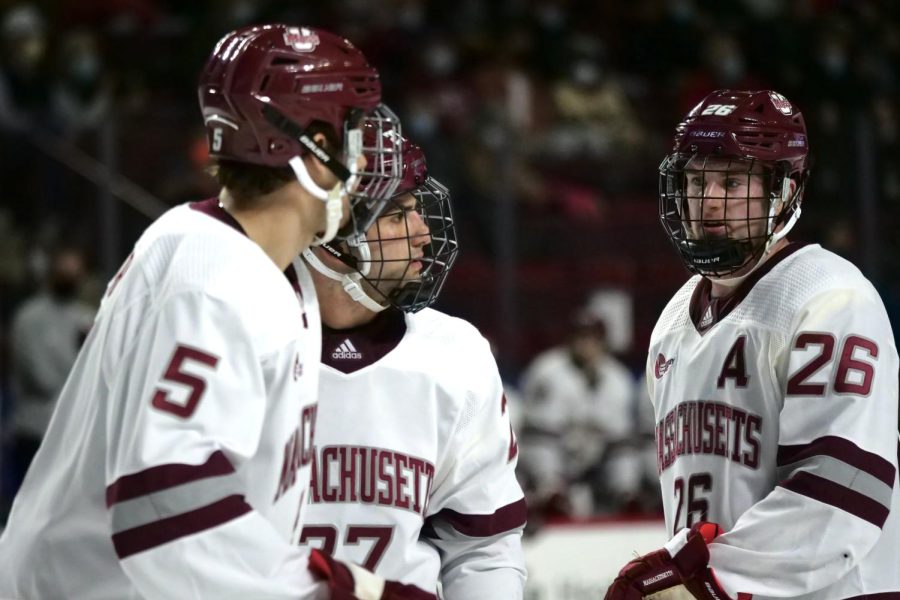 The Massachusetts hockey team hasn’t forgotten the last time it took the ice at the TD Garden.

In the 2018-19 season, UMass (20-12-2, 14-8-2 Hockey East) reached the HEA semifinals and matched up against Boston College. That night, it left the Boston Bruins’ home rink with a 3-0 loss to the Eagles. Only five current Minutemen were on that roster, but they never let that loss go, even after everything they’ve accomplished since.

“It still leaves a little sour taste in our mouth,” assistant captain Colin Felix said when reflecting on UMass’ last time in the TD Garden.

Felix, Bobby Trivigno, Ty Farmer and Anthony Del Gaizo all played minutes in that game and experienced the defeat, and UMass coach Greg Carvel cited a lack of experience on that stage as a contributing factor in the loss. Carvel and the Minutemen never played in the TD Garden before their matchup against BC — a team with plenty of experience on the NHL rink between Beanpot games and previous HEA tournaments. Now, UMass heads into Saturday’s matchup against UMass Lowell carrying valuable lessons with it the second time around.

“We’re going to try and use our experience from three years ago when [Trivigno] and his class were all freshmen, when we went in there and didn’t perform well,” Carvel said. “We remember what it was like the last time … were talking a lot about [how] the game is the same, but the surroundings are much different. That needs to be factored in.”

There are a few differences between playing at college rinks versus playing games in the TD Garden. Mainly, there will be more fans than the Minutemen have played in front of in a few years. Last year UMass played all its games in front of little or no fans until the Frozen Four, and even in the national championship the capacity was limited to just under 4,000 people. Saturday’s matchup is expected to feature a much larger crowd since the last semifinal games inside the TD Garden drew over 11,000 fans.

There are also certain situations that are difficult to prepare for without prior experience. In 2019 UMass was slated for the second game of the night, and the first matchup went into overtime, giving the Minutemen more pregame time than they anticipated. That unexpected change was one thing Carvel and UMass weren’t prepared for.

“If you have experience it’s really critical and really helpful,” Carvel said. “We didn’t really know what to do, how to handle the game being pushed back and what you do with the guys … I felt like in that last semifinal game we weren’t ready, it was a bit of a spectacle. So, I think it was important to talk about it and mentally get the guys [ready], especially since three quarters of our team has never been there.”

The rink itself at the TD Garden will also be something for the Minutemen to get used to. NHL rinks are 85 feet wide, whereas the Mullins Center sheet is 95 feet wide. The tighter space is something that UMass is comfortable with, though. Most college ice rinks are modelled after NHL size sheets, and the Minutemen have a 9-4-2 record on the road in those rinks. The close quarters can be an advantage for UMass since it leans heavily on physicality.

Outside of the difference in width, the Minutemen and River Hawk (21-9-3, 15-8-1 HEA) benches will be side by side, with the penalty boxes on the opposite side of the ice. That is something UMass has only dealt with one other time this year, and it means line changes will look a little bit different on Friday.

“We have to be diligent with our changes and have good communication on the bench,” Felix said of the NHL bench set up. “It’s obviously different playing in a different arena but we’ll be ready.”

As the Minutemen prepare for their semifinal game against UMass Lowell at 7:30 p.m. on Friday, many skaters will take that stage for the first time. But even having a few veterans who have been there before will be more helpful than traveling into the Garden without that knowledge.