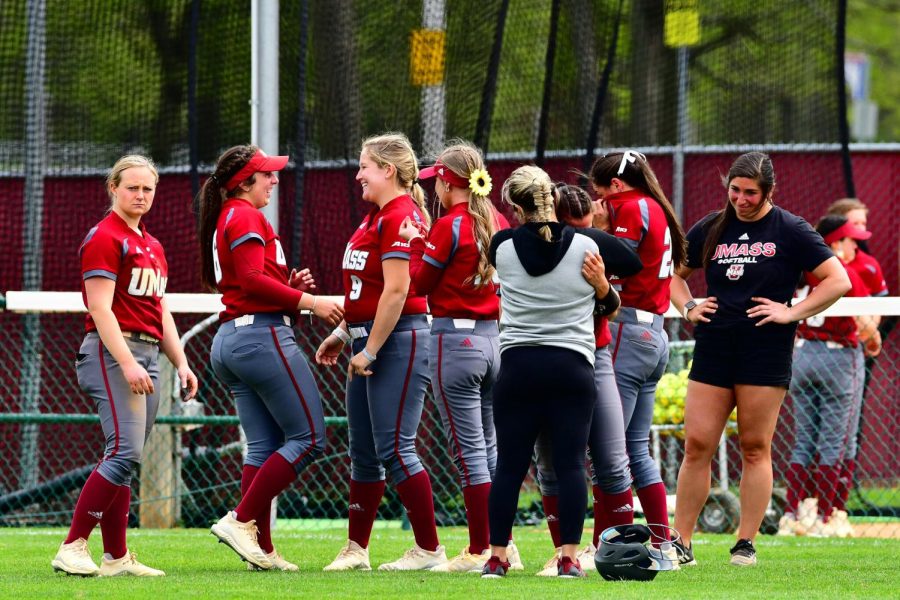 The Massachusetts softball team struggled on offense against Boston College, a team that just beat top 10-ranked Florida State. The Minutewomen (7-15, 2-0 A10) managed three hits and two walks in the five-inning contest, while BC (14-11, 2-4 ACC) had 13 hits and drew five walks.

Jules Shields hit a ground ball to the Eagles’ shortstop, who flipped onto second for the force out. In the process of turning the double play, the second baseman struck Allen in the helmet with the ball. The umpires called interference on Allen and the result was an inning-ending double play.

“The girl was on the base,” head coach Danielle Henderson said. “I know that’s the rule, I only ask what our runner is supposed to do…it’s happened to us on defense.”

The bottom of the second was the best opportunity the Minutewomen had all game, as 40 percent of their baserunners came in the inning.

UMass knocked on the door of opportunity again in the following inning. Kristina Day led off the bottom of the third with a single into right field. Two back-to-back strikeouts killed any chance of the Minutewomen closing the six-run gap with the Eagles, and the inning ended with no runs coming across for them.

One of the players putting together good at bats was Allen. Hitting .226 on the season, Allen went two for three with two ground ball singles to make up 67 percent of the Minutewomen’s hitting output. Besides Allen, the rest of the offense went a combined 1-14, with a .071 batting average.

This was a performance that was unlike the Minutewomen, who average just under four runs a game. This speaks to the pitching and particularly the defense of the Eagles, who made several plays in the field that robbed UMass of more baserunners.

Johnny Depin can be reached at [email protected] and followed on Twitter @Jdepin101.