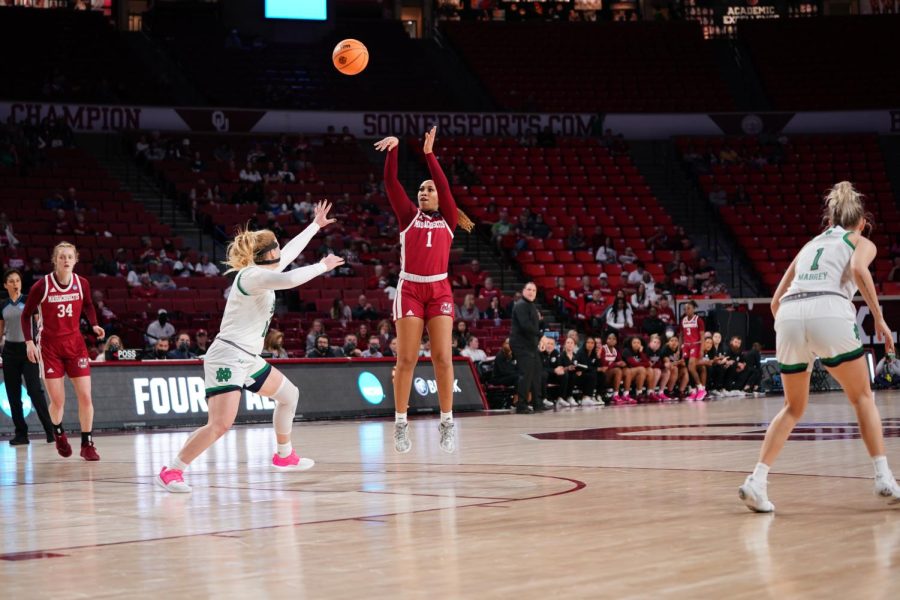 For the first time this century the No. 12 seeded Massachusetts women’s basketball team took the floor in an NCAA tournament game with a chance to make program history by advancing to the round of 32.

With just 4.3 seconds to go until halftime UMass found itself down 11 with No. 5 Notre Dame inbounding the ball under its own basket.

Angelique Ngalakulondi stole the inbounds pass and fired the ball ahead to Sam Breen. With one second left Breen fired up a half court shot. Breen banked in the shot with no time remaining and cut the Notre Dame lead to 49-41.

A sequence that encapsulates March Madness.

“I knew [Ngalakulondi] got the rebound,” Breen said. “There was probably like three-ish, three or four seconds left. Me and [Sydney Taylor] were both leaking out. She had us both. She hit me, and I knew I had to get it off. Like why not. Got it off in time. I think it was a big momentum thing going into halftime. I mean, what it brought it within like eight points. So I think that definitely helped. Just going through my mind, I knew I had to at least get it off.”

Breen’s half court heave gave her team a jolt of energy as out of halftime as UMass ramped up its intensity on defense. For the first three minutes and 20 seconds of the third quarter Notre Dame was held scoreless. UMass itself didn’t score until the 7:06 mark as a Ngalakulondi layup cut the deficit to six. Notre Dame got its offense going and then kept the Minutewomen from making a run.

The Fighting Irish had an eight-point lead into the fourth quarter and took advantage of UMass missing its first six shots of the period. Freshman point guard Olivia Miles ignited a 17-7 Notre Dame run that effectively knocked the wins out of the Minutewomen’s sails.

The freshman guard was able to drive into the UMass defense and get them to collapse. This would allow for Miles to fire a skip pass to the far side corner right into the hands of a wide-open shooter. Sonia Citron who was scoreless heading into the fourth heated up, scoring all nine of her points in the final period.

UMass had its hands full all night at the defensive end of the floor Notre Dame put on an offensive masterclass. The Fighting Irish shot 57.6 percent from the floor and 41.2 percent from the 3-point line. Miles was the engine that made Notre Dame’s offense go as she set up open shooters and displayed her outstanding court vision.

“I just thought that defensively we were dysfunctional at times,” UMass head coach Tory Verdi said. “You got to give Notre Dame credit for attacking us. I thought Miles did a great job of splitting us on the on-ball screen action and attacking downhill.”

Notre Dame’s maestro also showcased her elite finishing ability. Late in the first quarter Miles and Sam Brunelle executed a give and go to perfection. As Miles caught the Brunelle entry pass ball inside she was fouled by Alexzeya Brooks. Miles did not let contact affect her as she spun her body around and put a little extra spice on the ball to convert the and one layup.

The Fighting Irish came out of the gates with guns blazing as they put up 32 points in the first quarter. Dara Mabrey hit two of her five threes in the first minute of the game.

Forwards Maddy Westbeld and Maya Dodson combined for 37 points and proved to be too much for UMass to handle down low.

Sam Breen shined in her first NCAA tournament appearance scoring 31 points on 12-19 shooting to along with four rebounds. Breen’s 31 points tied her career high. The Atlantic 10 Player of the Year demonstrated why she was deserving of the award as she showed her ability to score at all three levels.

Sydney Taylor also had an impressive performance for the Minutewomen adding 21 points and five assists, while hitting four 3-pointers.

Destiney Philoxy who did not score in the A-10 championship game had another rough game committing seven turnovers while scoring only four points.

“I think that their length bothered her especially at the rim,” Verdi said. “She was kind of forcing it just a little bit too much where she didn’t allow the game to come to her.”

For UMass and Tory Verdi this season will certainly be one to remember as this team made program history and got the chance to go to the big dance.

“This team has been special. It’s been an unbelievable journey.”