UMass will start postseason play against Providence on Saturday

The Minutemen are 2-1 against the Friars this season 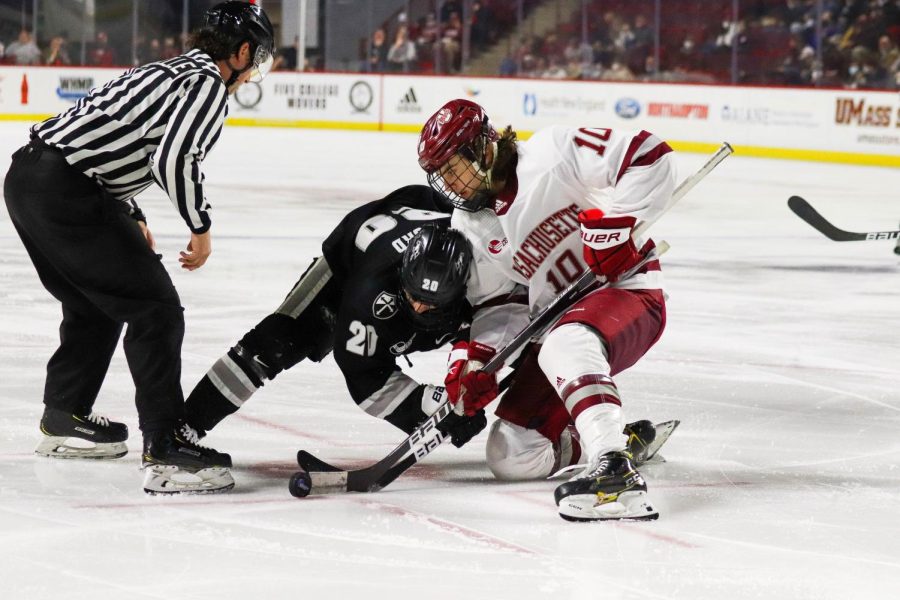 The Massachusetts hockey team ended its regular season with a tough sweep from Boston College, kicking it out of first place for the regular season in Hockey East standings. The Minutemen (19-12-2, 14-8-2 HEA) will look to redeem themselves against Providence College on Saturday night in their first playoff game of the season.

The Minutemen have done well against the Friars (22-13-2, 12-11-1 HEA) this year, winning two of the three games played against them. But Providence posed a challenged to them in all three contests and the programs historically match up well against each other.

UMass coach Greg Carvel wants his players to go in with the same mindset of a regular season game. Each game the Minutemen play has meaning behind it, but he knows heading into the game against Providence that if they lose to the Friars then that could be a season ending loss.

“This is playoff hockey and we’ve got to rise; we have to be better. The hope is to find a new level of play,” Carvel said.

In their first game against the Friars, the lone goal in the game was defenseman Scott Morrow’s lamp lighter in the third period. The Minutemen did come back the next night with a more decisive win against the Friars, 5-1, but in their most recent matchup they lost 2-1 in a difficult way.

“We’re thinking a lot about the last time we played [Providence]. They came in here and beat us 2-1,” Ufko said. “I think we scored and then after eight seconds they scored. That was late in the third period, so they really stuck with us, we’re all going to be thinking about that.”

A player that seems to know the Minutemen roster very well is Riley Duran. The Boston Bruins prospect scored both goals in UMass’ last matchup to send the Friars home with a win. Cody Monds was credited with an assist on both goals, while also having a goal in his second matchup against the Minutemen.

UMass looks a lot different since the last time it faced Providence, though. The Minutemen have seen a lot of positive change with scoring depth in their series, but the Friars will still prove to be a tough matchup on Saturday.

Many of the Minutemen on the current roster have been in this position before with playing games in the playoffs, some have gone to the Hockey East tournament multiple times. With so many older players on the UMass roster, it gives the freshmen leaders to look up to heading into games that are higher stakes.

“You just got to know that it’s win or lose. You got to be ready. Every shift counts,” Matthew Kessel said on his advice to younger players.

An area where Carvel wants to see improvement for the Minutemen is limiting mistakes in important shifts. In its series against BC, UMass was outshooting the Eagles by a wide margin, but the difference was that the Eagles were capitalizing on many of the Minutemen’s mistakes.

“We try to be a very aggressive team, but you can’t cross the line from aggressive to reckless. Boston College scored the game winning goal because we were reckless,” Carvel said. “We’re on an offensive rush and the next you know it’s a 3-on-1 the other way and the pucks in the back of the net and the game is over.”

Outside of film breakdowns and situational practices, there is a simple way for UMass to clean up its mental mistakes and stop giving up odd man rushes, according to its defensemen.

“We just need to read off of each other better,” Morrow said. “We play an aggressive system. At the end of the day, if one person is off the page then that kind of screws up the reads for everybody else. So, we just need to play with some unity and some togetherness to make sure those mistakes don’t happen.”

The Minutemen will have home ice advantage at the Mullins Center against Providence on March 12. Puck drop will be at 7 p.m.

Kayla Gregoire can be reached at [email protected] and followed on Twitter @Kaygregoire.