Weller: Analyzing the teams in Worcester Region of the NCAA Tournament

UMass is the No. 3 seed but can still make noise in the tournament 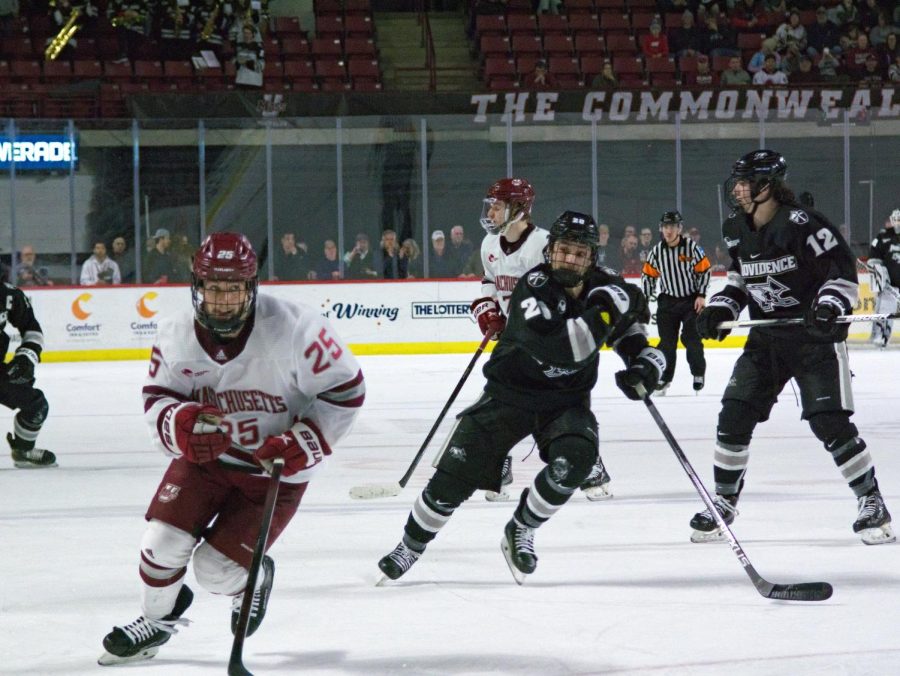 The Massachusetts hockey team has a tough road in front of it if it wishes to make it back to TD Garden for the Frozen Four, with hopes of repeating as national champions.

In the Worcester Regional for the NCAA Tournament, four teams will compete. Below are the strengths and weaknesses of each team in the region.

The start of the season did not go the way that the Minutemen had hoped, but they fought through the ups and downs to win back-to-back Hockey East championships. Bobby Trivigno is the heartbeat of the team and has been a standout player all season long. The captain also made it as a Hobey Baker finalist and won Hockey East Player of the Year.

With skill and composure, Trivigno is usually the one to come out of battles with the puck and able to maneuver his way around defenders to find the back of the net. In the HEA championship game, UConn made a costly mistake, leaving Trivigno wide open on the blue line with no defenders in his way and he started the comeback that provided UMass with the win. Teams all season long have tried to stop Trivigno, but to no avail, and it is now Minnesota’s turn to attempt the difficult task.

Garrett Wait, Trivigno, and Josh Lopina have been the catalysts in the offense this year, but it will take greater depth from the second, third, and fourth lines to create opportunities. However, the defensemen have stepped up their offensive game this season, with freshman Scott Morrow in second place at 13 goals and 20 assists, and Ufko behind him with 29 points.

In front of Matt Murray, odd-man rushes have been a struggle for UMass this year and is something that Carvel has spent many practices attempting to clean up. His voice and instruction can be heard from the stands every time one is given up, and in post-season play thus far, the Minutemen are determined to not give up any unnecessary offensive opportunities to their opponents.

While they have not always risen to the challenge all season, a different mindset seems to be surrounding the Minutemen in the post season, with each player elevating their game. This trend must continue for UMass to be successful against teams it has fallen to this season and ones that it hasn’t played yet. Minnesota is first up and if the Minutemen play aggressive from the first puck drop, then they will be a hard team to stop.

The Gophers biggest advantages are their tournament experience and their lineup depth. They are no stranger to the big stage, with 56 all-time wins in the NCAA Tournament, including 21 Frozen Four appearances and five national championships.

The UMass defensemen will have their hands full trying to stop Ben Meyers, the U.S. Olympian, Big Ten Player of the Year, and Hobey Baker Finalist whose accomplishments this year speak for themselves. The captain has 16 goals and 21 assists, showing very similar stats to the Minutemen captain who will be on the opposite bench in Friday’s first game.

When Jack LaFontaine signed with the Carolina Hurricanes, he left the Gophers in need of a goaltender. Justen Close answered the call and since then, Minnesota has been a different team. It has won several games, with Close at a total of 401 saves and a .928 percentage. He quickly proved that he is capable of carrying the load in net.

Gopher’s main problem in the Big Ten championship was playing the full 60 minutes of the game. After scoring one quick goal, Michigan responded and would go on to score three additional unanswered goals. However, Minnesota did not help itself throughout with back-to-back penalties called against them including a five-minute major. UMass is coming into this game as the underdog and is determined to repeat its success from last year, and for Minnesota to come out on top, it will have to play the entire 60 minutes.

The Broncos have earned the highest seed in the region, ranked at No. 1 for the first time in program history. Drew Worrad leads the team in points this season with 44, including nine goals and 35 assists, sitting in second place for the conference in scoring. Ethen Frank sits close behind with 26 goals and 12 assists, recording 38 points. With a strong offense, Western Michigan is averaging 3.7 goals per game, but only allowing an average of 2.6, and outshooting its opponents by a large margin.

In WMU’s semifinals game against North Dakota, it suffered a slow start which has been a problem for other teams in the region throughout this season. It fell behind early but was able to quickly bounce back. However, the Broncos high number of penalties left them unable to generate offensively, and instead having to play strong defense. In the championship game, the strong goaltending of Minnesota Duluth’s Ryan Fanti, who won the NCHC Goaltender of the Year, didn’t allow WMU to find the back of the net once. Going into the matchup against Northeastern, it will be once again met with a high-quality goaltender in Devon Levi.

To make it far, the Broncos must play through all 60 minutes at a fast pace, throwing shots on goal and overwhelming the goaltender enough to get the puck past him. With Worrad leading the charge, they will certainly be a tough team to beat, but to win the whole thing, they will need to clean up the areas of weakness that were present in matchups against many of the teams they will potentially meet once again.

Northeastern’s key to success lies solely in Levi, the sophomore goaltender who is a standout player for the Huskies in net this season. Levi received much recognition this year, being named to the Hockey East First Team, winning Rookie of the Year, and is also a Hobey Baker finalist. With him stationed in goal and Western Michigan’s struggles against top tier netminders, the Huskies’ main concern will be on the offensive end.

Northeastern is averaging 2.6 goals a game but on average has lower shots than its opponents. It will need to produce more offensive opportunities, playing aggressive with and without the puck, but being aware of penalties. With 339 minutes in the box this season as a team, it is leaving the door open for teams to capitalize and a strong NCAA Tournament contender like Western Michigan will surely take advantage.